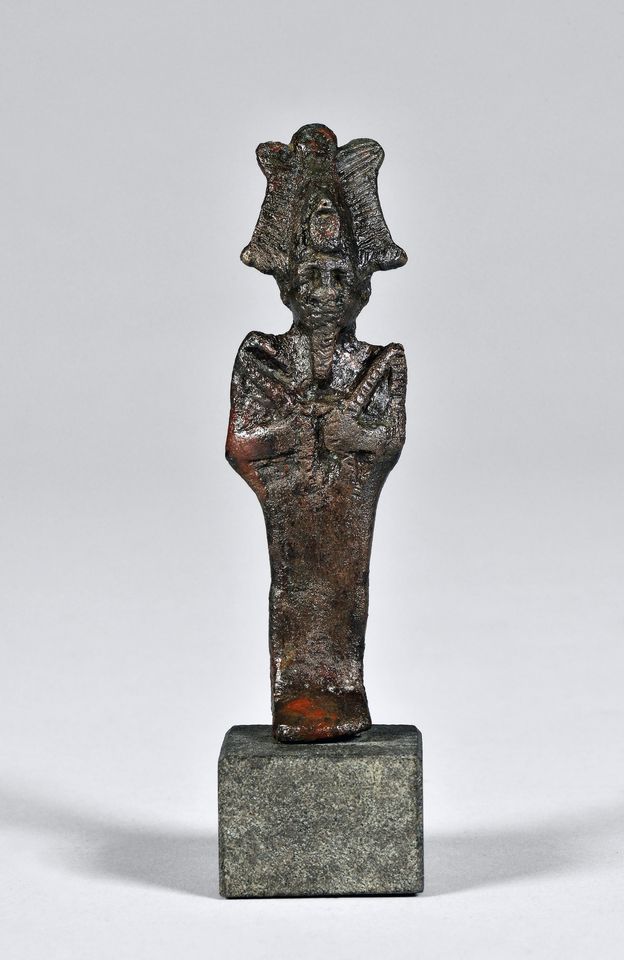 Collecting the East: a bronze statuette of Osiris (seventh-fifth century BC), one of around 3,500 Egyptian antiquities collected by Duke Ernest II of Saxony-Gotha-Altenburg

Bismarck once called the house of Saxe-Coburg and Gotha the “stud farm of Europe”. As junior members of the Ernestine line of the House of Wettin, they were extraordinarily well connected, marrying into royal families across Europe from London to St Petersburg; three Ernestines became respectively kings of Belgium and Portugal and Czar of Bulgaria. The widespread affiliations of the British royal family owed much to the Saxe-Coburgs. Queen Victoria was the daughter of a princess of Saxe- Coburg-Saalfeld and Prince Albert was her cousin, the son of Ernest III, the last sovereign ruler of Saxe-Coburg-Saalfeld, who became Ernest I, sovereign of Saxe-Coburg and Gotha, in 1826.

A spectacular exhibition, Die Ernestiner, staged by the Klassik Stiftung Weimar and the Stiftung Schloss Friedenstein in Gotha earlier this year illuminated the history of the Ernestines from their medieval origins to their forced abdication in 1918. It also explored their activities as patrons of religion, art, scholarship and science and displays a magnificent selection of objects from the rich collections they amassed. The exhibition focused on the key courts at Weimar and Gotha, but it also glanced at Meiningen and the other residences created by serial partitions. A sumptuous catalogue, Die Ernestiner: eine Dynastie prägt Europa (the Ernestines: a dynasty shapes Europe), and an accompanying volume of essays, Die Welt der Ernestiner (the world of the Ernestines), provide a wealth of illustration and context.

Named after the castle they originally inhabited on the Saale near Halle, the Wettins established themselves in Saxony and Thuringia and in 1423 became electors of Saxony. In 1485 they split into the electoral Ernestine line and the ducal Albertine line. The Ernestine ruler Frederick the Wise was one of the most influential German princes around 1500, but his successors soon suffered a disaster from which they never fully recovered. Frederick the Wise protected Luther but never committed himself to the new teaching. His successors wholeheartedly supported the Reformation and led the opposition to Charles V’s efforts to return the Holy Roman Empire to Catholicism. Following Duke John Frederick’s defeat at Mühlberg in 1547, however, the electoral title was transferred to his Albertine kinsmen, later based at Dresden.

Over the next century, the Ernestines failed several times to regain their electoral title by force. After 1648, they practised loyalty to the emperor and networking through carefully calculated marriages. These were mainly with other German dynasties in the Holy Roman Empire, intended to strengthen the Ernestine

claims on the electorate in the event of the extinction of the Albertines. The union between Augusta of Saxe-Gotha-Altenburg and Frederick Prince of Wales in 1736, however, represented a new departure. Although it ended with Frederick’s premature death in 1751, it laid the foundations for future unions, including that of Victoria and Albert in 1840. Meanwhile, the marriage of Charles Frederick, heir of the duke of Saxe-Weimar-Eisenach, to Maria Pavlovna, daughter of Czar Paul I, in 1804, further buttressed the Ernestines’ standing. They never did regain the electorate, but Russia helped Charles Augustus of Saxe-Weimar-Eisenach become a sovereign grand duke in 1815.

The Ernestine collections reflect their political fortunes. Frederick the Wise had one of the largest collections of relics in the Holy Roman Empire but it was sold off after his death. In 1504, however, he had appointed Lucas Cranach the Elder as his court painter. Cranach remained loyal to the Ernestines until his death in 1553 and painted not only for the private delectation of the court but also in the cause of the new religious teaching that was formally adopted in 1525. For more than half a century, he generated a considerable body of work for the Ernestines. Much of it has survived and prominent examples of both secular and religious paintings are on display in Weimar and Gotha.

Alongside the paintings and prints, the electoral library was also relocated from Wittenberg to Weimar. A large part of it was soon transferred to Jena where the dukes founded a new university as a substitute for Wittenberg to bolster their claims to be the true patrons of Protestantism. This inspired Ernest I of Gotha (reigned 1640-75) to accumulate the most extraordinary collection of books and manuscripts relating to the Reformation. He also instituted a Kunstkammer in his new Gotha fortress. In Weimar, meanwhile, his brother William IV (reigned 1626-52) devoted himself to more unusual artistic activity: in 1639 he hired the ivory turner Marcus Heiden to produce ornate standing cups for the court and to instruct the duke himself in the art of ivory turning.

By the time the Weimar court instituted a Kunstkammer around 1700, the Gotha rooms were already so full that the contents were being split up into numerous special collections. Paintings, prints and books remained central. But they were complemented by collections of coins and medals, scientific instruments, mineralogical samples, a “library” of wood samples (each carved into the form of a small book that could be inserted into a special case) and, by the end of the 18th century, one of the most extensive collections of Oriental books and artefacts and of Egyptological items anywhere in Germany.

Frederick III of Gotha (reigned 1732-72) and his wife turned their court into a centre of enlightened literary culture. Charles Augustus of Weimar (reigned 1775-1828) befriended Goethe and fostered the literary scene which developed in the town as a result. In the later 18th century, both dukes patronised new artists such as Tischbein and purchased significant collections of plaster casts and sculpture by Jean-Antoine Houdon.

It is fascinating to see items collected by the dukes in their original context. The castle at Weimar was largely destroyed by fire in 1774. Its replacement was Neo- Classical, though only completed with a rather dull south wing in 1913. Schloss Friedenstein in Gotha remains virtually as it was built between 1642 and 1656. Both families embarked on the construction of museums in 1864, each including 4,000 sq. m of exhibition space.

The Gotha collections in particular were depleted by the removal of items in dubious circumstances by the last ruling duke and his wife in 1945 and by Soviet confiscations. There is, however, more than enough left for this exhibition to convey just how much the Ernestines contributed to central European culture.

• Joachim Whaley is the professor of German history and thought at the University of Cambridge and a Fellow of Gonville and Caius College. He is the author of Germany and the Holy Roman Empire 1493-1806 (two volumes, 2012)

both in German only