In a conservation triumph, a 15th-century tapestry highlights the age of chivalry

“It’s the most spectacular representation of a tournament of that time,” a Met curator says 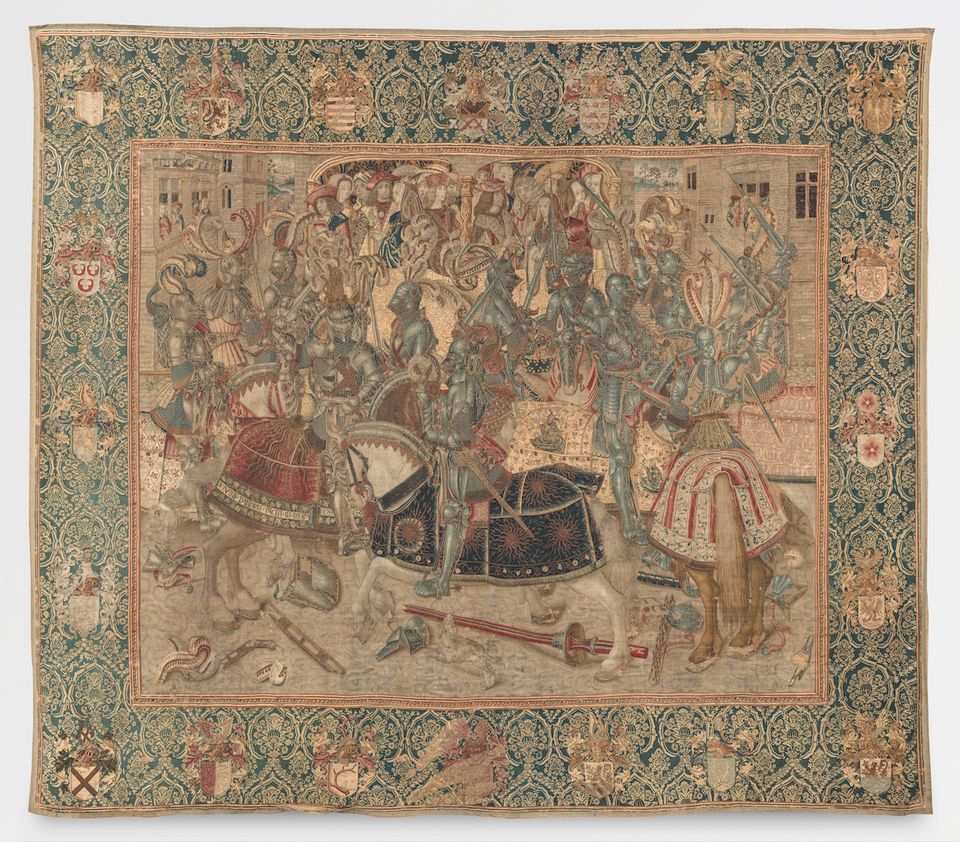 In its scale, detail and originality, the so-called Tournament Tapestry of Frederick the Wise may be the most striking object of its kind depicting knightly combat in the early Renaissance. Lent by the Musée des Beaux-Arts de Valenciennes in France, the tapestry figures prominently in The Last Knight: The Art, Armor and Ambition of Maximilian I at New York’s Metropolitan Museum of Art, an exhibition billed as the most comprehensive loan show of European arms and armour in decades.

The show makes the argument that the Holy Roman Emperor Maximilian I used the symbolic power of armour and chivalry to advance his political and dynastic goals in Europe. For Pierre Terjanian, the curator in charge of the department of arms and armour at the Met, it was only natural to borrow and showcase the tapestry, which depicts a mock combat of knights for a special audience in a loggia including Maximilian’s daughter, Margaret, and son, the future Philip I of Castile. “It’s the most spectacular representation of a tournament of that time,” says Terjanian, who dates the tapestry to around 1490.

That the tapestry was able to travel was a triumph for French conservators, who spent a year restoring the work in Aubusson, France, starting in April 2018 before it was borrowed for the show. The Met footed 40% of the €130,000 cost, with the French government financing 25%, the city of Valenciennes 20%, and public donations 15%, says Vincent Hadot, the director of the Musée des Beaux-Arts de Valenciennes.

Over the centuries the tapestry had become “very fragile”, grimy and “structurally very degraded”, Hadot says. Its silk threads were particularly damaged, its metal threads were tarnished and the borders were worn, including a galloon, or braided strip, that was not original to the tapestry.

Hadot says the tapestry had undergone restoration numerous times; reweaving in some areas was rough and visually distracting, although this did not affect the work’s overall structural integrity. Some seams had weakened and the work was held together chiefly by its lining.

Conservators removed the lining, allowing them to see the original dyes more clearly, Terjanian says. They also removed the hanging system and the non-original galloon before reweaving the borders. Considerable stitching was needed to stabilise the tapestry, the curator says, and a new lining was added to the back. The tapestry underwent a vacuum cleaning because it was considered too fragile for a wet treatment.

“The full measure of how luxurious and sophisticated this tapestry was came through only as a result of that conservation treatment,” Terjanian adds. “Our conservators, upon unpacking and installing it, marvelled at the finery of the weaving and also the techniques used.”

The work’s renewed vibrancy also allows museum-goers to savour the details. In the loggia, Margaret stands next to the future Charles VIII of France and places her left hand atop her right to display an engagement ring on her finger. This is part of what helped Terjanian to date the tapestry to around 1490, when Charles and Margaret were still betrothed. (Charles would renege on the engagement and marry Anne, duchess of Brittany, in 1491; compounding the insult, Anne had already been married by proxy to Maximilian, Margaret’s father.)

Restoration has revealed the fine details of the tapestry, such as Maximilian’s daughter Margaret (far right) displaying an engagement ring while standing next to her short-lived fiancé, the future Charles VIII of France Nicolas Roger

Coats of arms in the tapestry’s border clearly represent territory overseen by Frederick the Wise, prince elector of Saxony, suggesting that the work was commissioned by him or presented as a gift to him. “It’s unlikely that someone who was a supporter of Maximilian, like Frederick the Wise, would have wanted this humiliating engagement to be commemorated after its repudiation, so we have sort of a bracket that can help us date this tapestry,” Terjanian says. He continues to research the heraldic crests worn by some of the knights in the hope of identifying the families represented.

The work, which is likely to have been woven in Brussels, would have been based on a detailed cartoon. In some ways it is atypical for a tapestry, Terjanian adds. He cites the three-dimensional depth of field, the concentration of human figures in the loggia and the attention to accuracy in capturing the facial features of Margaret, Philip and Charles, which appear to be based on known painted portraits. Half of the characters have yet to be identified by scholars.

Based on his research so far, Terjanian conjectures that the tapestry commemorates the conclusion of a truce between the dominions of Maximilian and the kingdom of France. He cautions that Margaret, Philip and Charles were never in one place, however: “It’s not a snapshot of a scene that actually happened,” he says. “The spectators are representing forces or powers—it’s essentially an allegorical element.”

On that level, the tapestry reinforces the show’s thesis about the use of armour as a symbolic statement. The tapestry “cannot be taken literally”, he says. “It needs to be unpacked. This exhibition is very much about exaggeration and reconstruction.

“I think this tapestry is the perfect object: it’s one of the ones we can’t completely figure out.”

• The Last Knight: The Art, Armor, and Ambition of Maximilian I, Metropolitan Museum of Art, New York, until 5 January 2020