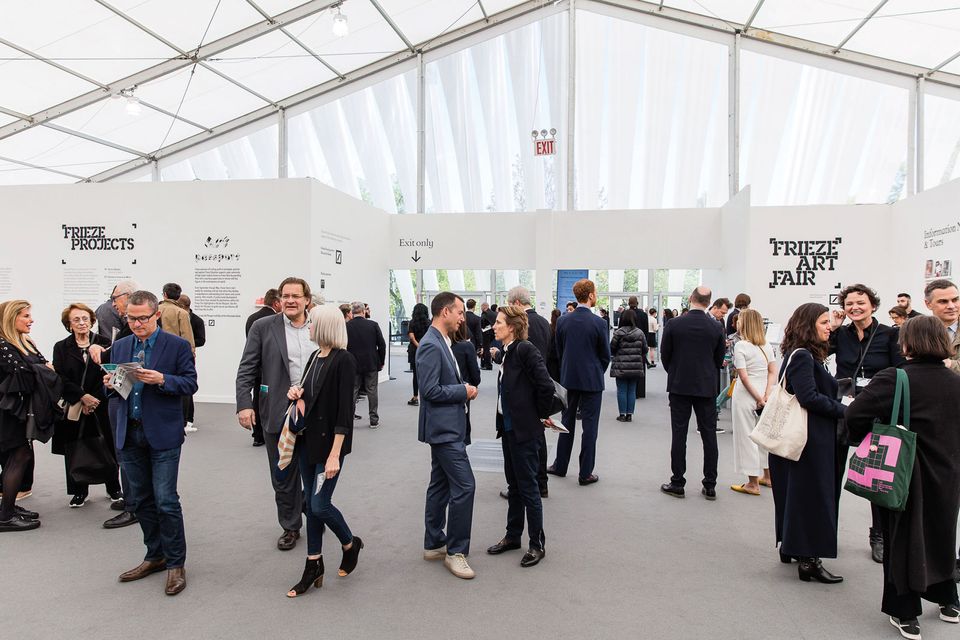 Ahead of the launch of Frieze’s new contemporary fair in Los Angeles next February, West Coast galleries are planting their flag on Randall’s Island Park for the seventh edition of Frieze New York (3-6 May). The much-anticipated new fair in California will bring together around 60 galleries at Paramount Pictures Studios in Hollywood. Nonetheless, Frieze remains committed to New York, the organisers stress, and the two events, they proclaim, will “together present a unified voice for Frieze in the Americas”.

Frieze, established in London since 2003, will be a “robust addition” to Los Angeles, says Matthew Lax, a gallery associate at Anat Ebgi gallery, which is based there. “While Los Angeles doesn’t have the same generational collecting as New York, we do have a vibrant history of significant and historic art collections, as well as up-and-coming collectors,” Lax says. In New York, the gallery is showing hand-embroidered textiles by the New York-based artist Jordan Nassar (all priced under $10,000).

Details about the new fair so far remain scant. Camille Weiner, the associate director of Roberts Projects in Culver City—which is showing 10 works from the 1970s by the Los Angeles-based artist Betye Saar in the Spotlight section in New York—says she hopes to participate in the new fair, adding that it is “upon invitation”. Victoria Siddall, the director of Frieze Fairs, says that because Los Angeles will be on a smaller scale to its other fairs, it requires a different approach: “The aim is to bring a strong representation of galleries from our host city, as well as a broad and diverse list of exhibitors from around the world. To achieve this, we are forming a committee that will select the galleries, and Frieze will then be in touch to invite them to take part.”

Frieze lands in the city at a critical moment. The Hollywood sport and entertainment conglomerate Endeavor (formerly WME-IMG) bought an undisclosed stake in Frieze in 2016, so a Los Angeles-­based fair seemed inevitable. But can the fair succeed where others have failed, including Paris Photo Los Angeles, which folded in 2016 due to poor sales? The goal with Frieze Los Angeles is to galvanise the city with an “annual moment”, says Bettina Korek, founder of the platform ForYourArt, who has been tapped as executive director.

Plugging into the wealthy Silicon Valley and Beach communities will be crucial for success. “My clients tend to be affluent tech and entertainment executives....One of the unique challenges for the fair will be getting the word out to this demographic,” says Annie Wharton, a Los Angeles-­based adviser.

The fair hopes to import some West Coast buzz to New York. “Aside from the larger galleries that have moved into this market, a slew of smaller project spaces add a great deal of energy to the city [Los Angeles],” says Mills Morán, the co-founder of Los Angeles gallery Morán Morán, which will show works by three artists, including Torey Thornton, in New York (prices on the stand will range from $20,000 to $100,000).

Others see a risk for Los Angeles if the scene begins to mirror that of New York, where artists and dealers have been priced out. “With the rapidly rising cost of living in Los Angeles, it’s going to become increasingly difficult for a lot of artists to live there after finishing graduate school. In the years to come you’ll see some big shifts,” says Tif Sigfrids, who recently relocated her gallery to Athens, Georgia. In the Frame section at Frieze New York, Sigfrids will present a solo show of new landscapes by the California artist Gracie DeVito.