Former UK shadow home secretary led protests at the Museum of the Home in Hoxton, which reopened to the public at the weekend 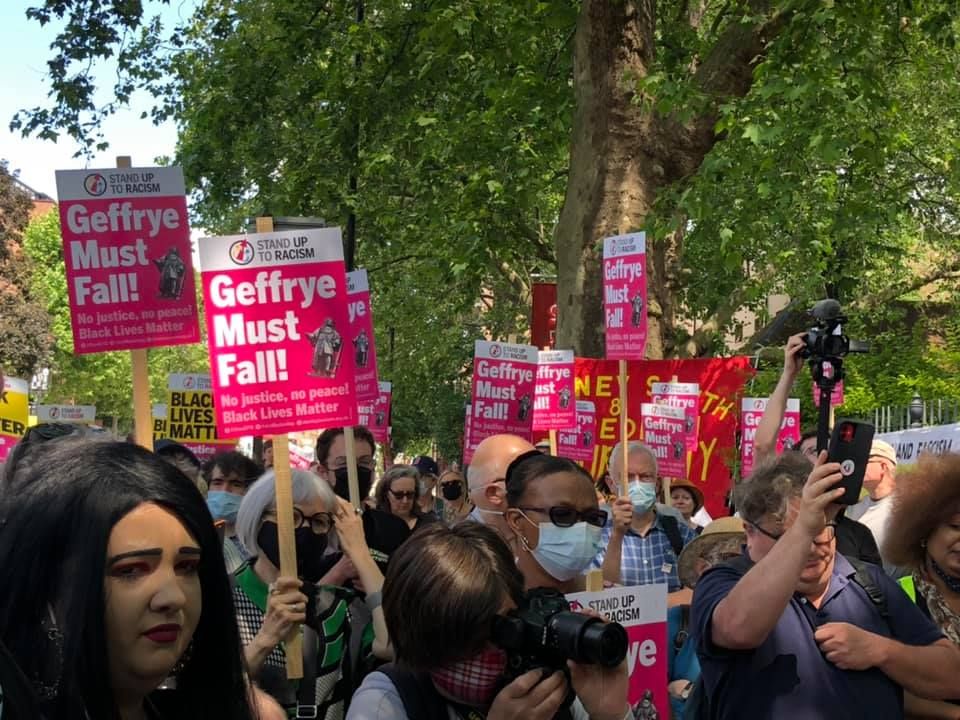 The Museum of the Home in London's reopening was overshadowed by protests over it's controversial colonial statue of a slave owner Photo: Stand Up to Racism/Facebook

Protests over a controversial statue in London erupted at the weekend, led by Labour MP and former UK shadow home secretary Diane Abbott and organised by activist organisation Stand Up to Racism. The sculpture, which depicts the slave ship owner Robert Geffrye, stands at the front of the Museum of the Home building in Hoxton.

The museum reopened on Saturday after a two-year refurbishment, welcoming visitors back to its 300-year-old almshouse buildings. The benefactor of the almshouses and former namesake of the museum, Geffrye was an English merchant who made part of his wealth from slavery. Last summer, the majority of respondents in a public consultation said they wanted the statue removed.

In an online statement, Abbott says that “the renamed Museum of the Home [formerly the Geffrye Museum] should recognise the need for change and resist pressure from central government. It should remove the statue… Museums should be places of learning about our history, among other things. Removing the statue should be an opportunity to highlight and learn from this shameful period of British history.”

Following the public consultation, museum trustees decided it would be re-contextualised and not removed, amid pressure from the UK culture secretary, Oliver Dowden, to “retain and explain” colonial heritage. “In July 2020 the board of trustees of the museum decided to keep and explain the statue of Robert Geffrye in its current position,” says a museum statement. 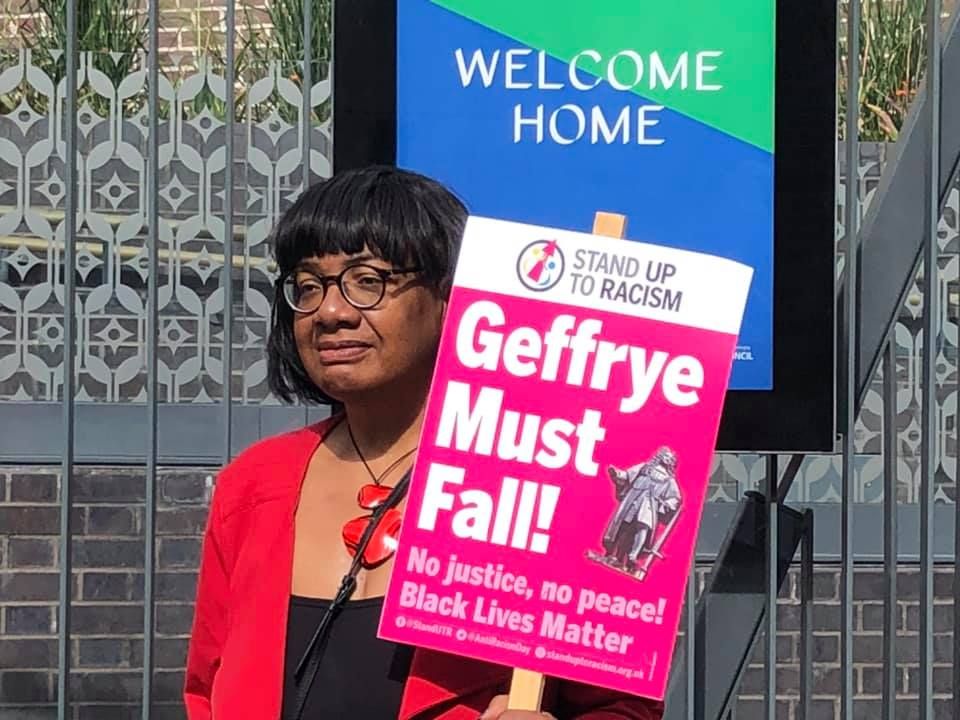 In a video streamed on social media, Labour MP Diane Abbott calls on “the leadership of the museum to take down the statue and listen to the community… Geffrye must fall.” Photo: Stand Up to Racism / Facebook

Last October, Dowden wrote in a letter to the museum: “[The] significant support that you receive from the taxpayer is an acknowledgement of the important cultural role you play for the entire country. It is imperative that you continue to act impartially, in line with your publicly funded status, and not in a way that brings this into question.”

Sonia Solicari, the museum’s director, subsequently told a parliamentary culture committee on 6 October last year: “The museum would ideally be free to act with integrity and in the best interests of its beneficiaries. It is highly unusual for government to take such a strong view in a matter which should normally be a curatorial decision.”

In January, the UK government announced new laws aimed at safeguarding historic monuments across England. This requires individuals to have listed building consent or planning permission before removing any historic statue. “In the light of this [ruling], the [museum] board believes that its original decision is the only practical option for the foreseeable future,” the museum says.

A spokesman for the Ministry of Housing, Communities and Local Government tells The Art Newspaper that a set of directions (formal instructions from ministers) were issued in April whereby “the Secretary of State [Robert Jenrick] will be consulted where a statue faces demolition and where the local planning authority are intending to allow that demolition. This would enable the Secretary of State to call it in and determine the application himself.”

In a video streamed on social media, Diane Abbott calls on “the leadership of the museum to take down the statue and listen to the community… Geffrye must fall.” The Labour MP for Hackney North and Stoke Newington also accused the museum chair, Samir Shah, of caving in to government pressure. Abbott told the Guardian: “It’s not too late for Samir to show that he’s a little bit more principled than someone who when ministers say to him ‘jump’ he says ‘how high?’” Shah had not responded to a request for comment at the time of writing.

The revamped Museum of the Home will highlight Geffrye’s slavery links in a text panel and in the audio guide, as well as in a new film by the artist Michael McMillan. The new signage will say: "These buildings were founded by Robert Geffrye, an English merchant who profited from the forced labour and trading of enslaved Africans." The changes are part of an ambitious action plan that says the museum’s staff and collections should “reflect the diversity of modern London” by 2025.

Tamsin Ace, the director of creative programmes for the museum, told the Daily Telegraph however: "The museum staff feel that by moving it [the statue] to an alternative location on site we can explain it better. Having it at height on a really visible thoroughfare in Hackney is problematic. We could tell that story really well by moving it to the graveyard where he’s buried, on the far corner of the lawn.”

A statement from the Museum of the Home says: “The museum is continuing to explore options for the statue and to listen carefully to all the issues raised. The museum is committed to being open about the history of Geffrye onsite and online and to confront, challenge and learn from the uncomfortable truths of the origins of the Museum buildings.”