Change was afoot at the contemporary sales in London this week as, due to the chronic issue of May auctions in New York and Art Basel in early June exhausting the supply of top-end consignments, auction houses consider alternatives to the flashy evening sale format.

Having ditched a June evening sale in London last year, Christie’s opted for two day sales, mixing works by fresher names such as Alicja Kwade and Nicolas Party with affordable pieces by the blue-chip regulars of previous years. The majority of lots were priced below £100,000.

But will other auction houses follow Christie's lead? Ralph Taylor, the global head of post-war and contemporary art at Bonhams, says the firm will also consider changing its calendar in line with Christie’s. “We will canvas opinion; if our clients would rather sell in March and October, then we are flexible,” he says. Bonhams made £3.6m (£4.4m with fees) from 36 lots on Wednesday (27 June). A third of the total came courtesy of Frank Auerbach’s Figure on a Bed II (1967), which sold on its upper estimate for £1.2m (£1.5m with fees).

Demand was strong for works below £5m at Phillips on later the same evening. The auction house achieved a rare white glove sale, notching up £29.1m (£34.4m with fees; estimated in excess of £27m), up 41% on last year’s sale.

“There has been a lot of discussion about fatigue, but the market feels very solid right now. We are all a little cautious at the top end of the market, which is high risk and speculative,” said Ed Dolman, the chief executive at Phillips, after the sale. “But the demand for things under £5m is extremely strong.”

He added: “We are continuing to look at whether June is an optimum time to sell, but if you look at the day and evening sales, it shows just how resilient the art market is in London in June.” 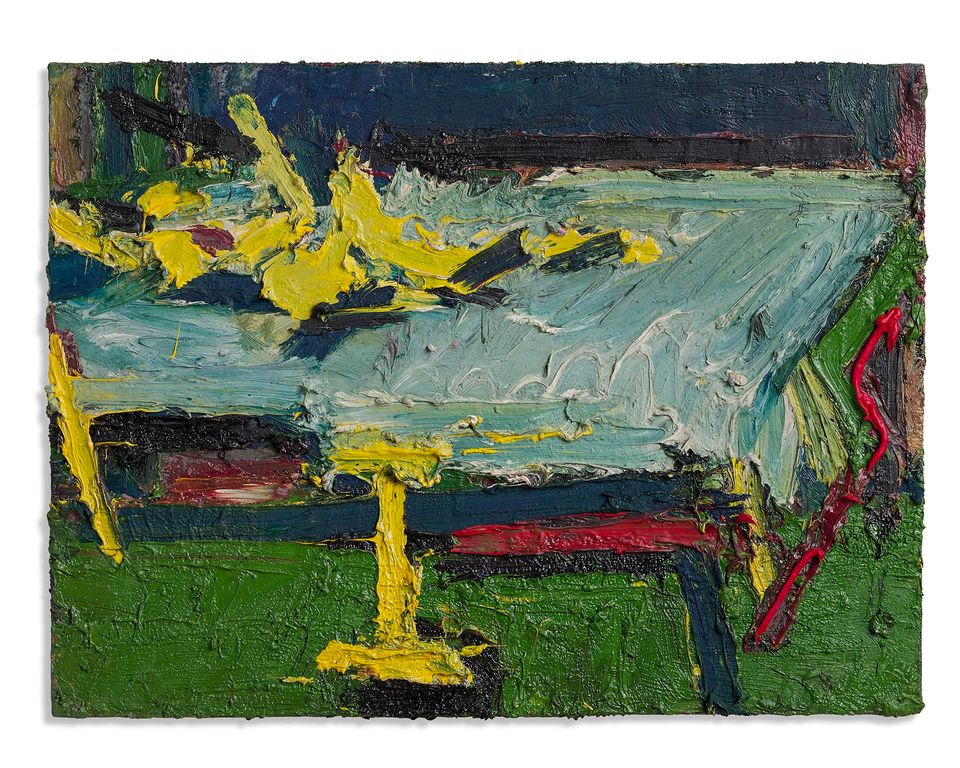 Figure on a Bed II (1967) by Frank Auerbach Bonhams

The Masterpiece London fair, Ascot and Wimbledon are often touted as other seasonal attractions for the art-loving crowd, however, in the salerooms there was little evidence that buyers were physically in the UK capital this week. “It is truly a global art market,” Dolman said. “The truth is that few buyers are actually based in England.” Asian bidding, particularly from Japan and Hong Kong, was apparent from the first lot.

As the London art adviser Nazy Vassegh observes: “In today’s high-tech world it is no longer essential to be physically present in the location where auctions take place. The auctions do benefit, however, from the summer season as events such as Ascot and Glyndebourne, which are a strong draw for some collectors.”

There were few masterpieces at Sotheby’s too, thanks in large part to the New York sales and Art Basel. Exceptions included one of the last reclining nudes that Lucian Freud painted, which achieved £19.7m (£22.5m with fees), making it the most expensive painting by the artist to be sold in London.

Further fizz was provided courtesy of black artists Sam Gilliam, who has his first solo show in Europe at the Kunstmuseum Basel (until 30 September), and Henry Taylor, the winner of this year's Robert De Niro, Sr. Prize. Both artists achieved records: £910,000 and £274,000 respectively.

Wrapping up proceedings from the rostrum, Ollie Barker declared the evening “an emphatic vote of confidence in June”.