Meet the dumpster-diving artist who turns garbage into art 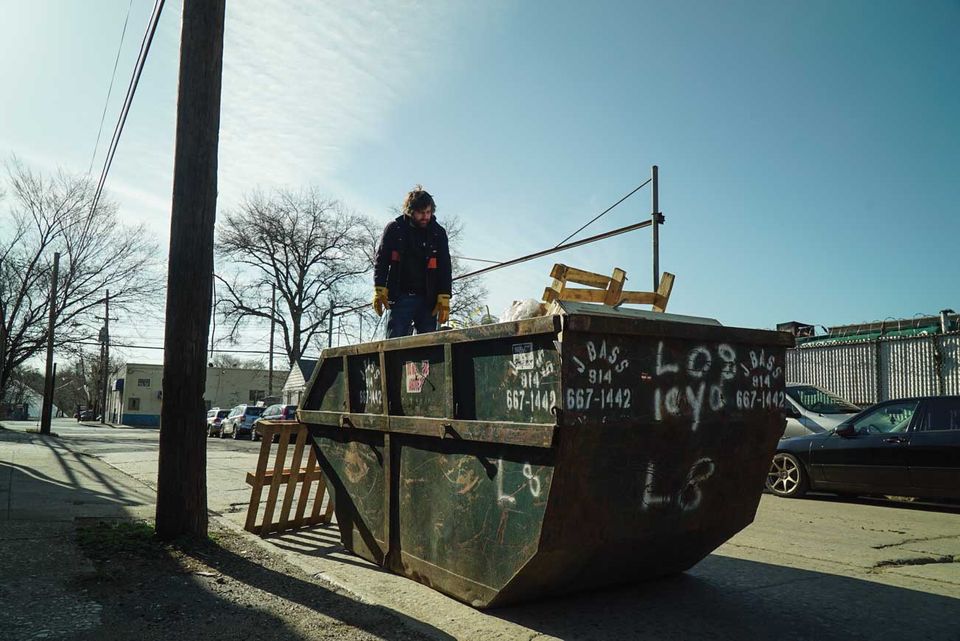 You can do interesting things “with fuck all”, says the artist Kevin Harman, who turns trash into treasure Christopher L. Cook

"You can do a lot of interesting things with fuck all,” says the Scottish artist Kevin Harman when I arrive in Mount Vernon, New York, to see him at work on his piece Skip 16 (2018), a sculptural installation made from materials found in an industrial dumpster, or “lugger”, as they are known in the US disposal industry. The work is among a series created by the Edinburgh-based artist since 2006, usually on site, wherever he finds an appropriate skip. This time, the sculpture has been transported to Randall’s Island, where it takes up most of Ingleby Gallery’s stand at Frieze New York.

To meet Harman last week, I took the 5 train to the end of the line and then walked 25 minutes into Westchester, just north of the Bronx. I passed innumerable auto shops, a massive street-salt pile and Saint Paul’s Church, a national historic site that was used as a British Army hospital during the Revolutionary War. (The church tower’s bell, which still hangs there today, was cast in the same foundry as Philadelphia’s Liberty Bell and was buried by the parishioners to stop the British from melting it down for ammunition.)

I eventually found Harman on a side street, standing next to the skip, assessing the cubic sculpture coming together inside. Built from the detritus found in the dumpster—bits of plywood, surprisingly lovely slabs of marble and so much cardboard—the unfinished piece looked as if it would fit next to any Arte Povera work or example of anarchitecture by the artist Gordon Matta-Clark. The rough diagonal line on the front of the work emerged as Harman began to assemble it and discovered that his spirit level was “useless” against the competing slants of the potholed street and the bent steel sides of the dumpster.

Harman had been labouring in the lugger, without assistants, for 18-hour stretches for two days, staying until at least midnight and relying on a headlamp to see into the container’s tight, dark corners, since the street light above was broken. After clearing out organic materials (decomposing fruit, a bag of coleslaw, half a chicken squashed in tin foil) and scrubbing the dumpster’s inside walls to get rid of any “dribblage contamination” and smelly residues, he set to work creating order out of chaos.

Although he sketches out ideas for the structure, he does not know what the finished work will look like until he starts building it. But he always starts with an understanding of the materials he has to work with, in this case everything from cement blocks, bricks and a large-format printer hidden at the core of the sculpture to scraps of paper, Styrofoam and sheets of black rubber. “You start getting a feel for different weights and a sense of how it will come out,” Harman says. During the visit, he cut cardboard boxes into smaller strips and broke apart wooden pallets—New York apparently has “the strongest known to man”—to create Skip 16’s sedimentary layers.

Harman says that sorting through the rubbish and making it into something that is recognisably art is “like therapy”, but he gets the most satisfaction from the conversations he has with passers-by as they watch the work develop. One of them, a local man named Lionel who had visited regularly, stopped by on his way home from work and repeatedly said, “I can’t believe it!” as he walked around the dumpster, seeing the neatly formed block where once there was just a jumble of trash. 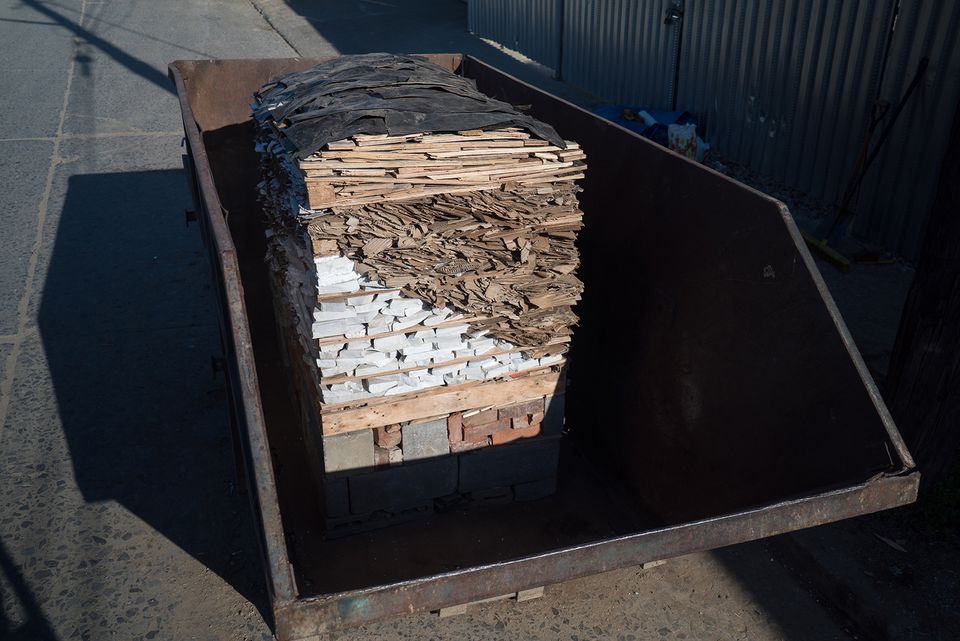