Seafront commission, which references the invasion of Iraq in 2003, is part of England’s Creative Coast: Waterfronts initiative The sculpture will be located on Margate's seafront Photo: Visit Thanet

The Iraqi-US artist Michael Rakowitz, the man behind the latest sculpture on the fourth plinth in Trafalgar Square, will unveil a monument on the seafront in Margate showing a soldier pointing an accusatory finger at the politicians who orchestrated the invasion of Iraq in 2003. Rakowitz worked closely with the anti-war organisation Veterans for Peace UK on the new work, entitled April is the cruellest month, which is due to be unveiled in April (until 8 November).

“The sculpture in Margate points towards [the UK] Parliament and the Foreign Office, where the decision to invade Iraq was made, and where these veterans who are now peace activists feel their moral injury began,” Rakowitz tells The Art Newspaper. The project marks the launch of England’s Creative Coast: Waterfronts initiative, comprising seven outdoor art commissions made in response to the Essex, Kent and East Sussex coastlines.

Rakowitz has remade works destroyed by Isis such as Assyrian reliefs and statues. His most famous sculpture in this series—the human-headed, winged bull Lamassu statue made of date syrup cans (The Invisible Enemy Should Not Exist)—stands in Trafalgar Square (until March 2020). 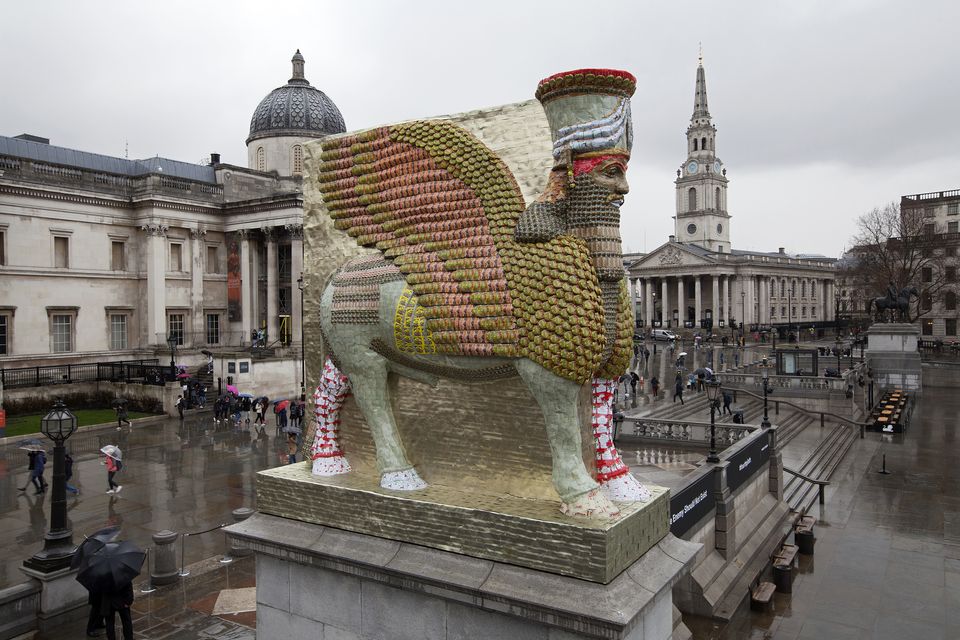 Michael Rakowitz's human-headed, winged bull Lamassu statue made of date syrup cans (The Invisible Enemy Should Not Exist) will be on show in Trafalgar Square until March

The Margate work draws on a memorial unveiled on the corniche in Basra, installed in 1989, which consisted of 80 bronze sculptures of Iraqi soldiers who were killed in the Iran-Iraq War; each sculpture pointed across the Shatt Al Arab river to Iran, where they died. When the British Army invaded Basra in 2003, the statues were dismantled; some ended up in monument “graveyards” across Iraq while others were thrown in the water.

In his proposal for the project, Rakowitz says: “Instead of simply rebuilding one of the 80 original sculptures, I am introducing an 81st [sculpture], modelled on the likeness of Daniel Taylor, who served with the Royal Artillery in Basra, Iraq, during the 2003 invasion and, through this sculpture, literally stands in solidarity with the Iraqi people.”

He adds: “I started to think about another disappeared Iraqi monument and spoke to members of Veterans for Peace UK. I decided it was time to start thinking about an 81st figure. In Basra, the Iraqi soldiers were pointing to the place [Iran] where they fell.”

The piece also refers to another forgotten monument in Basra, the Commonwealth War Graves Commission Basra Memorial to the Missing, which commemorates 40,626 British Empire soldiers who died during the Great War, including Edward Granville of Margate.

A plaque on the base of the statue will be inscribed with a quote from the English poet and soldier Sigfried Sassoon: “I am a soldier, convinced that I am acting on behalf of soldiers. I believe that this war, on which I entered as a war of defence and liberation, has now become a war of aggression and conquest.” Rakowitz discovered in the process that Sassoon is one of his ancestors, hailing from the same Baghdadi-Jewish family as his mother.

The Margate statue will be made of different materials, ranging from sand and earth in Basra to chalk from Margate. Items embedded in the aggregate will include medals donated by members of Veterans for Peace UK. Rakowitz’s work will be sited alongside another sculpture, Frederick T. Callcott’s Surfboat Memorial (1899), which looks out to sea.

Other Waterfronts works due to be unveiled over the summer include Holly Hendry’s Invertebrate at Bexhill-on-Sea (23 May-8 November) and Janus’ Fortress Folkestone by Pilar Quinteros in Folkestone (6 June-8 November).

Victoria Pomery, director of Turner Contemporary which is behind the new initiative, says: "We're thrilled that Michael Rakowitz has created this new sculpture specially for Margate, which will launch England's Creative Coast; it is another exciting moment for Turner Contemporary and our community.  Rakowitz is one of the most extraordinary artists practising today, making works that provoke debate."

She adds that the commission April is the cruellest month not only draws on Margate's rich heritage, it also reveals the connections—cultural, geological and political—that tie the UK to Iraq and the rest of the world.