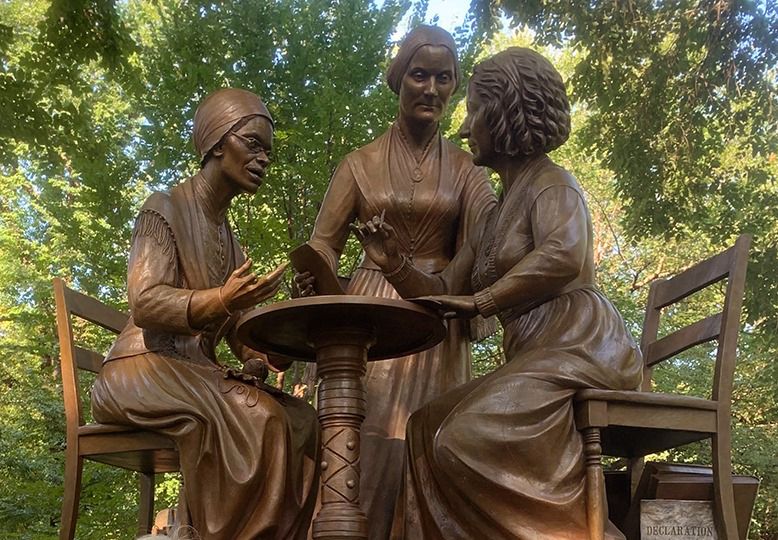 A bronze statue depicting three pivotal women’s rights advocates, Susan B. Anthony, Elizabeth Cady Stanton and Sojourner Truth, was unveiled today in Central Park in New York, marking the 100th anniversary of ratification of the 19th Amendment guaranteeing the right of US women to vote.

The event drove home how few women are represented in the city's statues of historic figures depicting women. As quoted by CNN, Pam Elam, the president of Monumental Women, the organisation that has led the campaign for the creation of the sculpture, says that only five of the city's 145 statues of historic figures depict women. And this one is said to be the first in Central Park to depict real women, as opposed to fictional characters like Alice in Wonderland.

Anthony, a forceful women’s rights activist, and Stanton, who earlier established a profile as an abolitionist, together pushed for women’s suffrage. Truth, who was born into slavery but later escaped, championed abolition and women’s rights in heralded speeches.

"We’re still fighting so that every eligible American can cast their ballot and know their vote will be counted regardless of race, age, or geography," posted the former Secretary of State and presidential candidate Hillary Clinton, who attended the unveiling. "It's a battle worth fighting, and one we have to win."

“As we struggle towards greater justice, we need and deserve a monument commemorating some of the important work that has come before us,” the monument’s sculptor, Meredith Bergmann, was quoted as saying. “My hope is that all people, especially girls and boys, will be inspired by this scene of women of different races, different religious backgrounds and different economic status working together to change the world.”