Collector interest in videos is rising, but the medium still struggles to find floor space 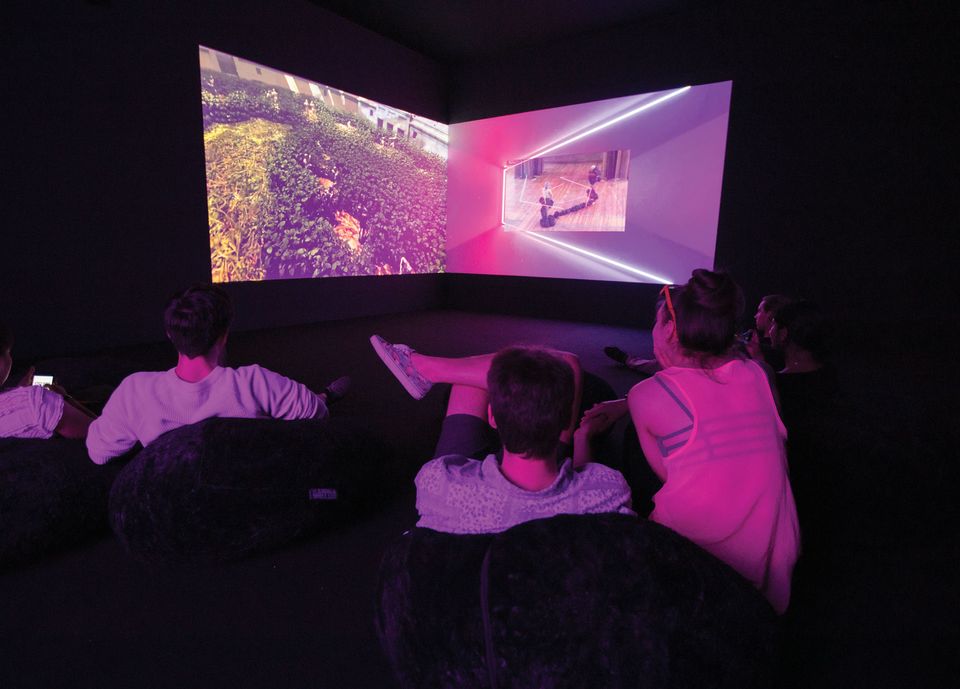 Video installations and art fairs make for uncomfortable bedfellows given that many fairs do not provide two things such works need: space and time. Also, video art is often considered a hard sell to many private collectors. Yet having been around for more than half a century and with an increasing number of artists working in the medium, there is a greater need for—and interest in—including such work in fairs.

“[Export] basically invented video installation, she called her work ‘expanded cinema’,” the gallery’s executive director Arne Ehmann says, adding that collector interest in her work “has been building in the last three to four years”. The video, in which the artist uses a split-screen technique to create multiple versions of herself on a loop as way of exploring the “split-self experience” of being a woman, is offered in an edition of ten for €45,000 each.

Elsewhere in the fair, video art remains vastly outnumbered by painting and sculpture. According to the avid video art collector Alain Servais, at a large global art fair these types of work typically account for around 1% of the works on offer, while nearly a quarter of most major biennials and other art surveys are videos. Indeed, at this year’s Venice Biennale, the prestigious Golden Lion award for best artist in the central exhibition, May You Live in Interesting Times, went to Arthur Jafa for his video The White Album (2018), and the Silver Lion, which honours a “promising young” artist, went to Haris Epaminonda, who also employs video in her practice.

Even though institutional support for videos is high, “value and collectability in the art market is based on scarcity, artificial or otherwise”, says Servais, who bought his first video work—a VHS tape with six works by William Kentridge for $1,000—in 1999. He notes that video can be reproduced and widely distributed, undermining the requirement for scarcity.

The collector and philanthropist Patrizia Sandretto Re Rebaudengo says that when she first came to Art Basel in 1992, “there was a lot of video work”, but over the years it has tapered off. “It is necessary to support artists working in the medium, to bring their work to a broader audience,” she says. To that end, she says fairs can further the production of video art apart from showing films. She was one of several jurors who shortlisted three artists whose works were presented at Art Basel in Hong Kong in March for the BMW Art Journey award, two of whom were video artists. The award, announced on Tuesday, went to one of them, the Shanghai-based film-maker Lu Yang.

At the Liste fair, videos are numerous. Lucas Hirsch gallery is showing a selection of videos punctuated by gauzy digitally-printed textiles and olfactory elements by the Basel-based artist duo Dorota Gawęda and Eglė Kulbokaitė, who explore the interdependence of the body and technology. Hirsch says that the fair is “pushing for more video and installation” to better reflect how a new generation of artists are producing work, noting that he received funding from the Friends of Liste initiative for Gawęda and Kulbokaitė’s project.

The Liste exhibitor Paul Soto, who says that video projects are about the collective “experience” rather than individual ownership, is showing an arrestingly surreal, spiritualism-infused holographic video, complete with a dry-ice smoke effect, by the Los Angeles-based artist Dylan Mira, available as an edition of five. Soto admits that video installation can be a “challenging medium in a fair context” but that inclusion in a fair can have “a huge amplification effect” for a young artist.

“How are you going to sell it if you can’t show it?”, says David Hoyland of the London-based Seventeen gallery, adding that he always tries to show video in fairs he participates in. At Liste, he is showing (among other works) a post-apocalyptic video surveying London’s ecological wastelands by Patrick Goddard. He says that there are plenty of private buyers interested in video work, but that more should consider collecting it. “The storage costs for it are tiny, yet you can lend it to a museum where it can take up a whole wall. It seems like great value for money to me,” Hoyland says.

Correction: a previous version of this article stated that Alain Servais is a dealer and collector. He is not a dealer and the text has been amended to reflect this.