Race to write Modern art history in the Middle East 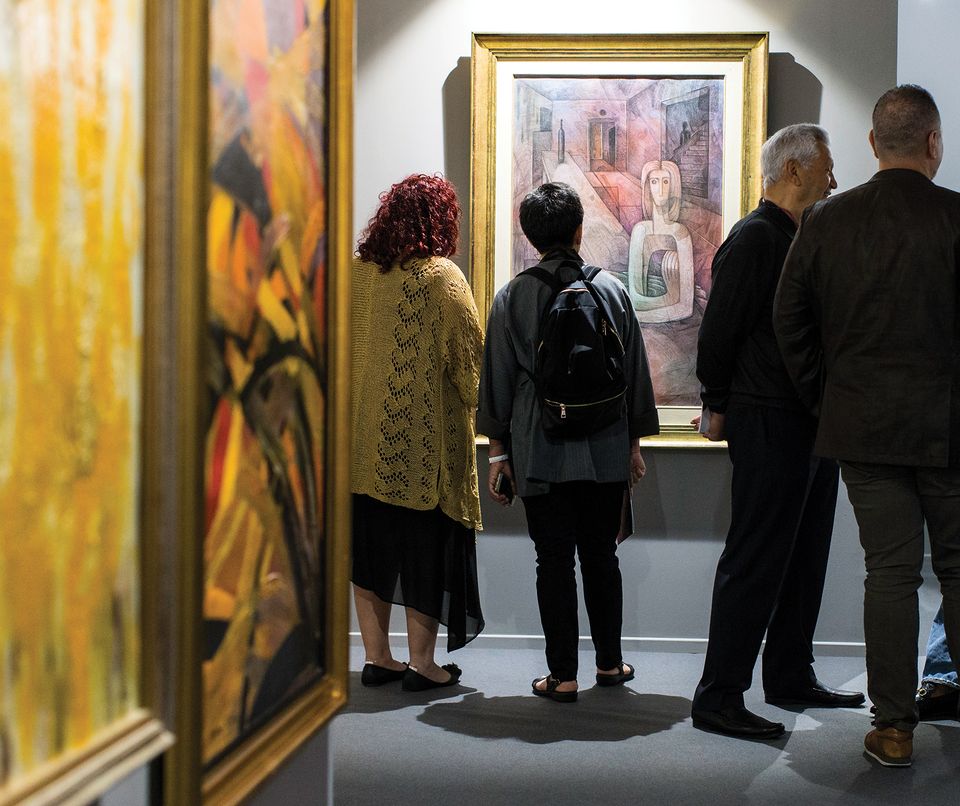 International interest in Modern Middle Eastern art has grown from almost nothing in the past two decades—and so have prices. Now it must consolidate, and more authentication bodies, artist foundations and scholarly publications are needed. Issues in regard to authenticity are by no means unique to the Middle East, but there is the added complication that conflict here has destroyed archives and libraries, particularly in Syria and Iraq.

Recognising this gap and the regional appetite for progress, scholarship is on a fast track. That much is evident at Art Dubai (until 24 March), where a cluster of events, including a symposium, a loan exhibition and book launches reflect activity on both the commercial and the curatorial fronts.

The eighth volume in the Primary Documents series from New York’s Museum of Modern Art is launching at the fair. It includes texts translated into English for the first time. A dearth of translations has impeded study of Middle Eastern Modern art history. “With the lack of full documentation and forensic investigation, we can only rely on provenance and logical reasoning,” says Nada Shabout, from the University of North Texas, who co-edited the publication and sits on Art Dubai’s Modern Advisory Committee. She is also the academic adviser to a loan exhibition supported by Saudi Arabia’s Misk Art Institute, a new partner to the fair. That Feverish Leap into the Fierceness of Life is a survey of Modernist groups from five Arab cities by the independent curators Sam Bardaouil and Till Fellrath.

Last year, the first catalogue raisonné for the Egyptian painter Mahmoud Saïd, written by Valérie Didier-Hess of Christie’s and the scholar-collector Hussam Rashwan, was launched at Art Dubai. The duo are now working on a publication on Abdel Hadi El Gazzar, another 20th-century Egyptian artist.

“The Middle Eastern art market cannot progress or evolve without academia and without books,” Didier-Hess says. She notes a growing need to reassure buyers by publishing serious books. “It’s a tragedy that there is such an academic hole in Middle Eastern art and we are running out of time to archive, document and protect it: we are 20 years too late.”

Didier-Hess is working with Gazzar’s family, which has “extensive archives, including a scrapbook in which [his] widow kept a meticulous written and visual record of every work she or her husband sold”. The family also authenticates works, although, unlike others, it does not charge for the service.

Gazzar’s daughter Tayseer is due to speak at Art Dubai’s symposium on Wednesday 21 March. Indeed, it is often the children of Modernist artists who are leading foundations. Another is Manuella Guiragossian, daughter of the Armenian-Lebanese painter Paul Guiragossian, whose family was one of the first to establish such a foundation formally in the region in 2011. “After prices went up significantly, starting at Christie’s first sale in Dubai in 2006, we saw an increase of horrible fakes making their way into collectors’ homes and in the market,” she says. After five years’ work, the foundation is launching the first comprehensive, 400-page monograph of Guiragossian’s work at Art Dubai this week.

The Guiragossian Foundation has created an authenticity certificate “filled with security measures to make it impossible to reprint and sign”, Manuella Guiragossian says. A team of experts and committee members must all agree on an attribution, and the team is working on adding further security measures.

“The situation is getting a lot better,” says Michael Jeha, the managing director of Christie’s Dubai. “For most Modernist artists, there is now someone to go to, an expert or foundation. Ten years ago, there was no one. The whole process of authentication has become far more sophisticated.” The artist Dia Azzawi is an invaluable authority on the work of his Iraqi contemporaries, Jeha says. Still, the local technical infrastructure needs improvement. “Laboratories in the region do not exist for the technical analysis of works of art,” says Charles Pocock of Dubai’s Meem Gallery, which has to send works to the UK for verification.

All works in the Modern section at Art Dubai are approved by the fair’s advisory committee. In addition to physical vetting, the committee must see documentary evidence in one of three forms, says the fair’s director, Myrna Ayad. “First, if the gallery is in contact with the estate and/or the artist’s family, a certificate of authenticity from both sides is required. If the artist is deceased and there is no estate, the gallery must provide provenance [information] through archival material—for example, images of the work in period magazines or exhibitions. Or, if the artist is alive, they certify [the work] themselves,” she says.

Guiragossian advises collectors to “know the origin of the work, its proper title and date and any story it comes with”, such as details of past purchase. Ayad agrees: “Read as much as possible, speak to as many people as possible—gallerists, the artist’s family, academics. Then, when armed with that knowledge, let your heart do the deciding.”