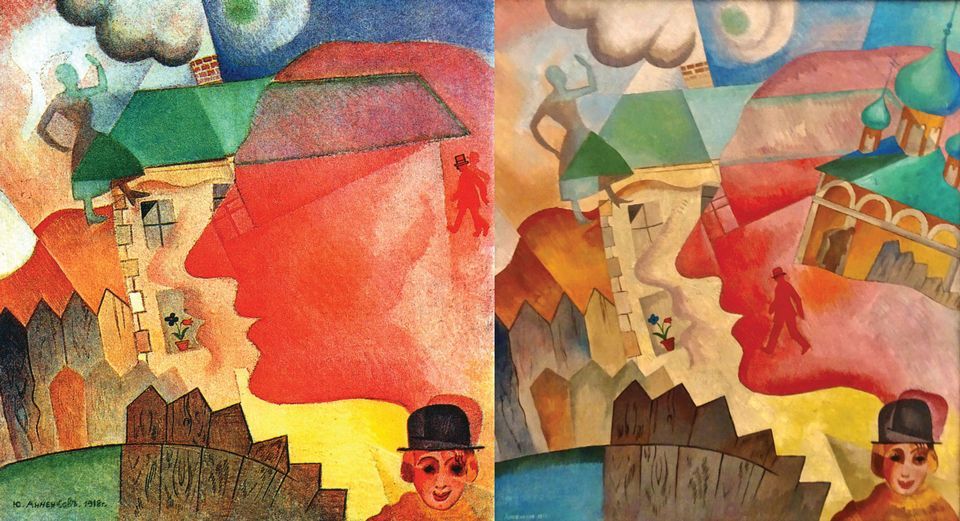 Vladimir Hofmann, the world’s leading authority on Yury Annenkov, has pointed out the striking similarity between a fully authenticated Annenkov dated 1918 (left) and a work ascribed to the artist, labelled Synthetic Landscape and dated 1919, which was on display in the Ghent show Dieleghem Foundation (Synthetic landscape)

The recent display of works attributed to the Russian avant-garde and on loan from Igor Toporovsky’s Dieleghem Foundation to the Museum of Fine Arts in Ghent continues to make headlines over doubts as to their authenticity.

On 26 February, 30 members of the Russian section of the International Association of Art Critics (AICA) challenged the director of Museum of Fine Arts, Ghent (MSK), Catherine de Zegher, “to explain her position” concerning the “scandal” surrounding the display, adding that“no one, except Mr Toporovsky and Mrs de Zegher, have stood up to defend the authenticity of the exhibited works” and regretting that De Zegher had “allowed herself such a wilful act”. De Zegher has yet to respond.

Two days earlier, on 24 February, the Flemish newspaper De Standaard reported that the loan agreement between the Dieleghem Foundation and the MSK contained a clause allowing any work on display in the museum could be removed and sold, with MSK having first refusal. De Standaard also quoted Jan Op de Beeck, the chairman of the friends of the MSK, as lamenting the “strong entanglement of the market with the museum” under De Zegher’s leadership.

As reported in the February issue of The Art Newspaper, the Dieleghem Foundation also reserves the right to sell any work from its 500-strong collection with the approval of its management board. This consists of Toporovsky, Christian Pinte and Hélène de Witt du Lau d’Allemans.

Toporovsky also told The Art Newspaper in January that he hopes “40-60%” of the estimated €2.5m needed to restore the Château Dieleghem in the Brussels suburb of Jette, where he hopes to show his collection, will be covered by public subsidy. When asked if De Zegher’s presence on the foundation’s “scientific council” represented a conflict of interest, Toporovsky said: “We needed to be on the same wavelength to do the exhibition in Ghent.”

Meanwhile, the Flemish culture minister Sven Gatz was given a rough ride on Flemish TV channel VRT just hours after the commission he had established to assess the authenticity of the works shown at MSK resigned en masse (one of its members, Willem Jan Renders, the curator of Russian art at the Van Abbemuseum in Eindhoven, has since told The Art Newspaper that: “I got the impression that our efforts would end up in juridical debates instead of thorough research”).

When the chat-show host Lieven Van Gils suggested to Gatz that Belgium had become an international laughing stock because of the MSK affair, the minister said: “There are similar cases abroad all the time,” pointing to the Modigliani show in Genoa last summer. But that show, retorted Van Gils, was closed down by the police, with 21 works seized and subsequently declared forgeries by a court-appointed expert, and the show’s organiser, curator and chief lender placed under investigation.

In the Dieleghem affair, on the other hand, the MSK has not filed a complaint for damages, while Toporovsky has been able to take back his controversial works of art unhindered. Unlike Italy and most other West European countries, Belgium has no art crime squad. This was dissolved in 2015, by when its staff had shrunk to just two. Some feel this absence makes Belgium a tempting base for art fraudsters.

In what TV officials described as an unprecedented attempt at editorial interference, VRT received two calls ahead of the show— one from the MSK’s PR officer, urging them not to proceed, the other from Dirk Vanduffel, the co-founder of ArtDependence Magazine, who has claimed (in the only article about the affair posted on the MSK website) that there is “little verifiable evidence” that Toporovsky’s works are fakes.

Gatz’s conduct continues to infuriate Flemish museum bosses but, given the imminent (1 March) deadline for submitting applications for the next round of ministry funding, few dare speak out. One senior museum official told The Art Newspaper that the scandal was making “the under-funding of museums feel legitimate to taxpayers,” adding: “Someone should try to secure the movie rights for what has happened in and around the Ghent Museum over the last few weeks!”

• Comment: When it comes to understanding authenticity, listen to the dealers and the market—not the academics