Surreal ideas about sex: how Dorothea Tanning and Leonor Fini resisted being pigeonholed by their gender

On The Art Newspaper podcast this week, we explore the life and work of two women connected to Surrealism whose work had until recently been overlooked 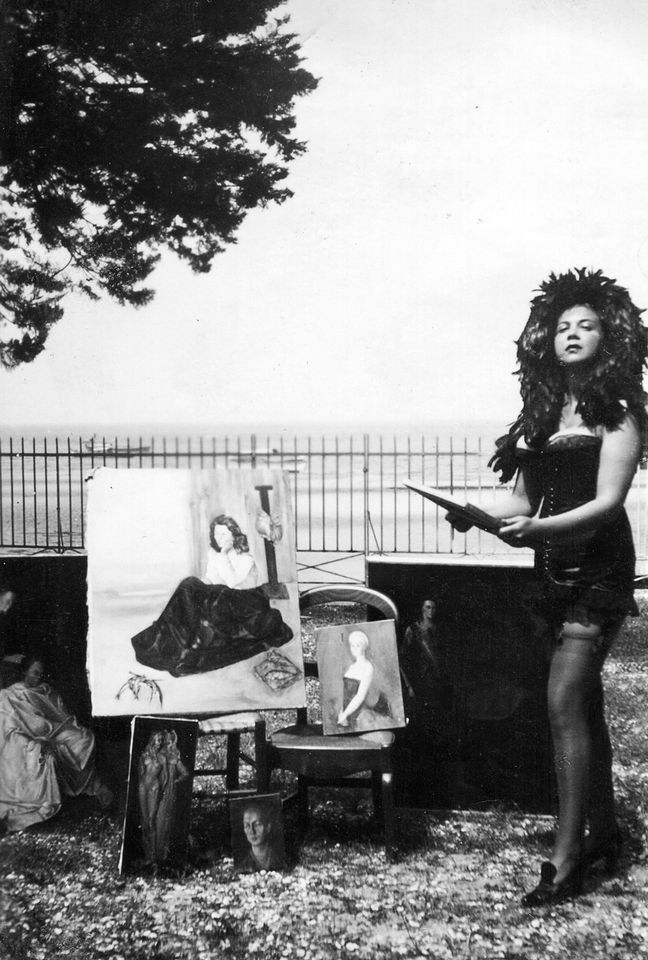 Leonor Fini in Arcachon, France, in 1940 Courtesy of the Leonor Fini Estate

In the final room of the Dorothea Tanning exhibition now on view at the Museo Nacional Centro de Arte Reina Sofía in Madrid, visitors will see one of Tanning’s quotes on the wall. “Women artists. There is no such thing—or person,” it begins. “It’s just as much a contradiction in terms as ‘man artist’ or ‘elephant artist’. You may be a woman and you may be an artist; but the one is a given and the other is you.”

In this week’s episode of The Art Newspaper podcast, Alyce Mahon, the reader of Modern and Contemporary Art at the University of Cambridge and the curator of the Madrid exhibition, tells us why she has emblazoned Tanning’s words so prominently within the exhibition. “I felt it was important to note her own idea of self-fashioning, what she wanted to be remembered for, but also to complicate how we talk about and curate shows about women artists,” she says. Tanning “didn’t want the label of a woman or people going a priori into an exhibition and looking for the gender tropes, looking for the gender argument”, Mahon continues, because “she was nervous of being sucked into a particular feminist narrative, a feminist movement of the 1970s and 1980s, and almost all the work she had done being neglected or being misrepresented in other ways”.

Ever since Whitney Chadwick published her seminal book Women Artists and the Surrealist Movement in 1985, there has been a tendency to group female artists connected to Surrealism together. But while the recognition of the artists’ achievements was long overdue, being gathered by gender was an idea many of them resisted. Indeed, the other artist Mahon discusses on the podcast, Leonor Fini, was resistant to any kind of pigeonholing, including being called a Surrealist, even though she exhibited in some of the legendary shows connected to the movement, including Fantastic Art, Dada and Surrealism at the Museum of Modern Art in New York in 1936 and the Surrealist Exhibition of Objects at the Charles Ratton Gallery in Paris in the same year.

Fini was “very vocal about people like [the Surrealists’ leader, André] Breton being… not quite idiots… but being very misogynistic, having very poetic ideas that she didn’t agree with. And yet she again exhibited often with the Surrealists and engaged with the debates, and wanted her side to be heard. She was more vocal about not wanting to be described as a woman artist, however: she said that was a worse ghetto than any notion of Surrealism.”

Fini had forward-thinking ideas about gender. The exhibition dedicated to her at the Museum of Sex in New York, on which Mahon was the curatorial advisor, analyses “how she deals with sexuality as performance and how Surrealism offered her a means to expand the boundaries of what it is to be male or female”, Mahon says. “She herself said that she viewed herself as androgynous—now, we might describe that as a kind of non-binary position in different parlance—but then, she said she was androgynous.”

The male figures in many of Fini’s works are “passive, beautiful, handsome males”, Mahon says, who have also been seen as androgynous. “Some of them are very androgynous and others are just very beautiful objects of desire,” Mahon suggests. “They’re not armoured, muscular men, but they are her muses. So we’ve a tendency to presume if they’re sleeping and nude or naked that that makes them androgynous and positively homoerotic. Whereas in fact, she lived in a ménage à trois, she had two male lovers, she had a community of friends and lovers and just offered a very different lifestyle. And she could explore this in her self-portraits and portraits of lovers and show women as these kind of viragos—Amazonian creatures.”

"She was more vocal about not wanting to be described as a woman artist, however: she said that was a worse ghetto than any notion of Surrealism." Alyce Mahon

Comparing the way that male and female Surrealists depict certain motifs is illuminating. In Tanning’s work, for instance, “we do have the motif of the child, the femme enfant, the little girl which people have seen before in Max Ernst, in Salvador Dalí, in other artists’ work”, Mahon explains. “But she tends to represent the Victorian child, the Alice in Wonderland child, enraged, wreaking havoc on the domestic space, not in a passive dreamscape… The child and the sexuality of the child, which of course [the Surrealists] were interested in, and which Freud writes beautifully about, is something that’s being explored by this woman artist.”

Fini’s many works depicting the sphinx reflect her originality and distinctive position to that of her male peers. “A lot of the male Surrealists turned to the story of Oedipus which is where we get the figure of the sphinx, because Oedipus’s challenge is to solve the riddle of the sphinx.” But while the male artists “obsess over the narrative of the young man killing the father and bedding the mother”, Fini and other female Surrealists focus on the sphinx as “a figure of knowledge, and the fact that she is a mythological creature, a virago creature… The women see themselves very much in the sphinx creature who usually has the bust of a woman and yet the body of a lion, and is this conglomerate of creatures mythological, which gives them the potency.”

You can hear the full discussion on The Art Newspaper Podcast, in association with Bonhams, which you can also find on iTunes, Soundcloud and TuneIn. Also on this week’s episode, we hear about Gustav Klimt and Egon Schiele as an exhibition of their drawings opens at the Royal Academy, London, along with a spate of others in Europe and the US. The art dealer and world-renowned scholar of Schiele, Jane Kallir, compares the artists’ styles and discusses Klimt’s influence on the younger artist.