On the Bard’s birthday, Sotheby’s announces it will offer Edward Hopper’s ode to Shakespeare 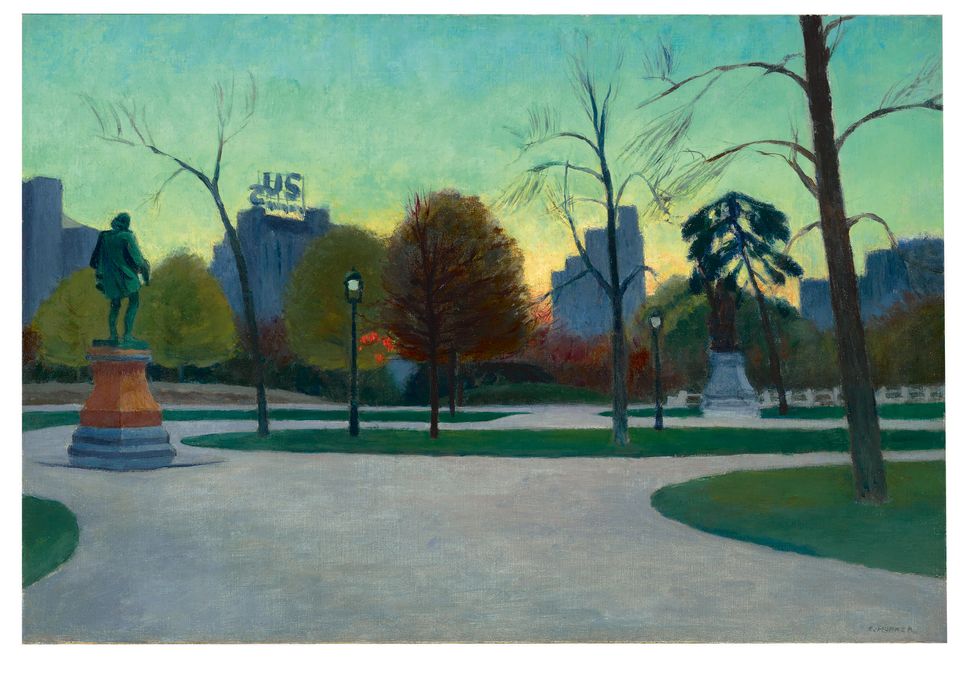 Hopper's Shakespeare at Dusk will be offered in Sotheby's American art sale in New York this May. Courtesy of Sotheby's

Coinciding with the date scholars believe to be William Shakespeare’s birthday, Sotheby’s announced today that it will offer Edward Hopper’s Shakespeare at Dusk (1935) in its forthcoming American Art sale in New York on 21 May. The oil painting depicts a statue of the playwright in Central Park, made by John Quincy Adam Ward, captured at dusk. It is part of a series of New York cityscapes, a subject that the American artist began exploring early in his career while studying under the Realist artist Robert Henri. The work is estimated to fetch $7m-$10m.

Hopper was known as a literature lover and his works contain the occasional reference to his poetry and prose proclivities. Kayla Carlsen, the head of American Art at Sotheby’s in New York, says this particular work “possesses a sense of stillness and quietude that is found in the artist’s most important and celebrated works”.

His appreciation for Shakespeare was noted in his wife’s diaries, according to scholar Gail Levin. Josephine Nivison-Hopper, a fellow painter, wrote in 1949 that her husband read Shakespeare to her while he posed for her paintings. “While he posed, and while she did chores, Edward took to reading aloud to her again—sometimes songs from Shakespeare, Villons Ballade des Dames du Tempes Jadis, T.S. Eliot’s essays”, Levin writes in Hopper’s 1995 biography.

Levin also suggests that Hopper’s interest in literature “helps to characterise his particular brand of Realism”. She adds: “Signs of Hopper’s engagement with literature emerge in his boyhood… Three of Ralph Waldo Emerson’s subjects in his [1850 collection of essays] Representative Men—Plato, Shakespeare, and Goethe—were the only figures in European literature that Hopper ever related to pictures he painted.”

Sotheby’s says the work overtly suggests Shakespeare’s influence on Hopper’s work, particularly of the poet’s description of autumnal twilight in Sonnet 73, one of his most famous works:

That time of year thou mayst in me behold

When yellow leaves, or none, or few, do hang

Upon those boughs which shake against the cold,

In me thou see'st the twilight of such day

As after sunset fadeth in the west,

Which by and by black night doth take away,

Death's second self, that seals up all in rest.

In me thou see'st the glowing of such fire

That on the ashes of his youth doth lie,

As the death-bed whereon it must expire,

This thou perceiv'st, which makes thy love more strong,

To love that well which thou must leave ere long.

Carlsen notes that there has been "a recalibration of Hopper’s market" within the last year. Following the successful sale of two of the artist’s major oil paintings last fall—Chop Suey (1929), which sold at Christie’s for $91.9m and surpassed the artist’s previous auction record by over $50m, and Two Comedians (1966), which Sotheby’s sold for $12.5m—Shakespeare at Dusk is well positioned to bring in its estimate. Sotheby’s New York sold another Central Park scene by Hopper, Bridle Path (1939), for $10.4m in 2012, well over its estimate of $5-$7m.