Shakespeare Birthplace Trust's £30,000 appeal aims to restore ambitious sculpture of the Bard in grounds of his former home 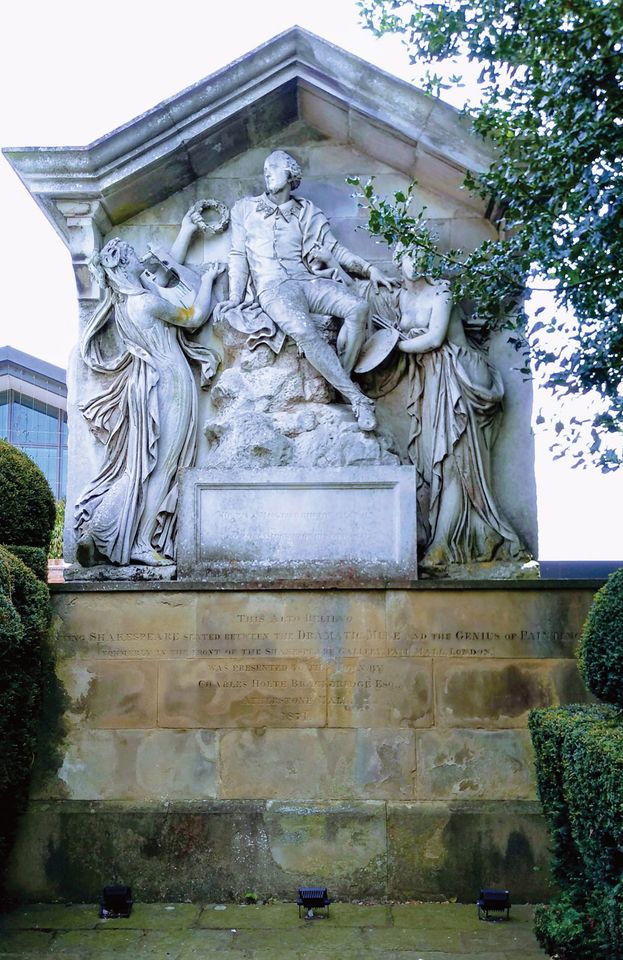 Thomas Banks’s 18th-century monument, which shows Shakespeare flanked by the Dramatic Muse and the Genius of Painting, was originally created for the Shakespeare Gallery in London, which housed works by artists including Angelica Kauffman and Joshua Reynolds Courtesy of the Shakespeare Birthplace Trust

In a rather dank and gloomy corner of William Shakespeare’s garden, the great man himself sits most uncomfortably on a pile of rocks, flanked by scantily draped muses and completely missed by most tourists. The Shakespeare Birthplace Trust, which owns the site where New Place, the playwright’s grand house, once stood, is running a £30,000 public appeal to pay for urgent repairs of this monument and to improve its setting.

The monument is protected by Grade II* listing, the second highest category awarded by Historic England, in honour of its remarkable history. It was already almost a century old when it arrived in town, transported first by train and then ignominiously on a brewer’s dray.

Shakespeare, in a wild mixture of Tudor and fashionable Georgian dress, flanked by the Dramatic Muse and the Genius of Painting, was created in 1789 by the Royal Academician Thomas Banks, and perhaps over-admired by a contemporary journal as “the most perfect piece of sculpture that has yet been produced by a native of Great Britain”. It was made for the new Shakespeare Gallery on Pall Mall, one of the grandest streets in London. The institution was the inspiration of a wealthy printer and engraver, John Boydell, who commissioned scenes from Shakespeare from all the leading artists of the day. It opened with 34 paintings and soon added many more, including works by Angelica Kauffman, George Romney, Benjamin West and even Sir Joshua Reynolds, who had initially sneered at the idea of “painting for a printseller”.

Twenty years earlier, the actor and impresario David Garrick’s worshipful but rain-sodden Shakespeare Jubilee in Stratford-upon-Avon in 1769 is credited with launching the Shakespeare tourist trade, and by 1789 it was flourishing, boosted by innumerable stage productions and cheaper printed editions. Boydell cannily courted the middle classes, flattering them as “patrons of native genius”. They paid a shilling or got in free if they subscribed to his handsome eight-volume edition of Shakespeare’s works, and could then buy engravings of any paintings they admired and take them home to create their own Shakespeare galleries. Boydell’s success was mocked by some, with the savage cartoonist James Gillray portraying Shakespeare sacrificed to avarice, having just turned down the offer of a commission himself. A flurry of imitators included the artist Henry Fuseli’s own Milton Gallery.

The gallery closed in 1805 and the sculpture long outlived it, remaining in place until the building was demolished in 1868. The monument then disappeared for a few years—Nic Fulcher, the project manager at New Place, is still trying to trace its full history—but was presumably dismantled and stored. In 1871 it was offered to Shakespeare’s native town by the wealthy antiquarian Charles Holt Bracebridge, and it graciously accepted provided that he paid the full hefty cost of transport and installation.

By then New Place itself, the mansion where Shakespeare died in April 1616—a few streets from the much more modest house where he was born in April 1564—was long gone. The house was demolished by a disgruntled clergyman, Francis Gastrell, who was fed up with tourists and town taxes.

The monument is installed in the beautiful garden on the site, which is now cared for by the Birthplace Trust along with other properties linked to the Bard. (All are now temporarily closed because of coronavirus.) There are worrying cracks in the brick box supporting the slabs of high relief sculpture, although the figures and the cornice that were added later to protect them from rain remain in surprisingly good condition. The work will include trimming back some of the shrubbery that now hides it, and giving the Dramatic Muse back the fingers and the bronze lyre strings she lost somewhere on her eventful journey to Stratford-upon-Avon.