The public joins the protest in Frieze’s Live programme 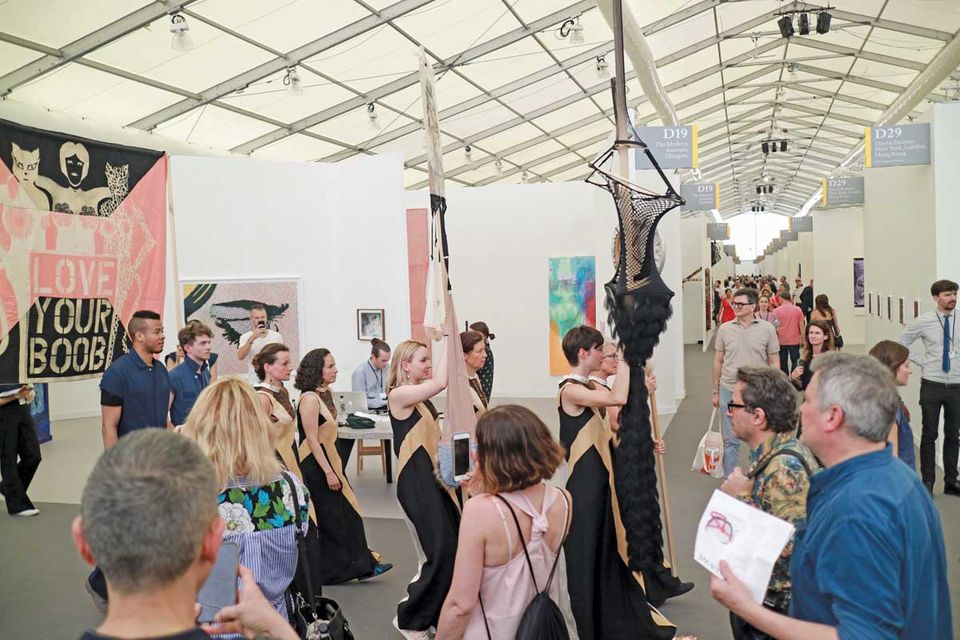 Although Frieze New York has always made room for performative art (who could forget Maurizio Cattelan’s chandelier- lit donkey in 2016?), the fair’s new Live programme, organised by the curator Adrienne Edwards, encourages fair-goers to confront social issues and even to become part of the protest.

The Live programme is intended “to enable galleries to show what they want on their stand, but also to be able to bring more unusual works”, says Victoria Siddall, the director of the Frieze fairs. “Unsurprisingly, politics is the thing that’s shining through this year.”

Organised around the concept of “assembly”, the works range from spoken-word broadcasts over the fair’s PA system by Alfredo Jaar and a roving musical procession by Raúl de Nieves and Erik Zajaceskowski to site-specific installations that will last for as long as six months.

One of the most visible is Adam Pendleton’s Black Dada Flag (Black Lives Matter) (2015-18), installed at the head of Randall’s Island, where two dark, protruding rocks were known as Negro Head and Little Negro Head until 2001. “Objects perform; it’s not just about living bodies”, says Edwards, who was recently named the Whitney Museum’s first curator of performance art. “That’s why there are all of these visual icons that are used in [political] movements, like flags and banners.”

Hank Willis Thomas has made two monumental flags called 15,093 and 15,580 (both 2018), named after the number of embroidered stars they bear, which represent the number of Americans killed by gun violence in 2016 and 2017. Hung from poles at the fair’s south entrance, the 30ft-long flags pool on the ground. The artist, who lost a cousin to gun violence, conceived the work as a monument to “all the fallen stars”. His dealer, Jack Shainman, says: “The message comes across in such a simple and direct way.”

A more subtle message can be found in Dave McKenzie’s performance Furtive Movements (2018), to be staged on the edge of the Frame section all day on Sunday. “It started as something I heard on TV—a comment about the rationale that police cited for stop and frisk,” the artist says, referring to the New York Police Department’s practice of randomly searching civilians for weapons and drugs, which was curtailed after the city was sued for racial profiling.

McKenzie is choreographing his movements based on officers’ testimony about suspects’ behaviour, and although these actions (such as slipping a hand into his pocket) may go largely unnoticed by the well-heeled fair crowd, he says that their innocuousness is the point. “We have a tendency to assume that a step forward is enough,” he says. “It’s not. If we don’t all have the privilege to sit on a bench, what do we have?”

The Netherlands-born artist Lara Schnitger is restaging a work with continued relevance, updating her procession Suffragette City (2015-ongoing) for the #MeToo era. “I was thinking about how no one was really that surprised when these male figures were accused [of sexual harassment],” she says, “so I’m incorporating chants that start very soft, grow louder and go soft again.”

Volunteers, chosen via social media, march through the fair’s aisles carrying fabric banners, backpacks representing burdens and “slut sticks”, sculptural works bedecked in lingerie and hair that riff on pride- reclaiming “slut walks”. When the parades are not in session, visitors can finger-scrawl their own slogans into the sequin flip fabric hung on the wall of the L2 booth.

“We happen to be in a moment where artists are experimenting in all kinds of different ways,” Edwards says. “What you’re seeing is reflective of what artists are making.”