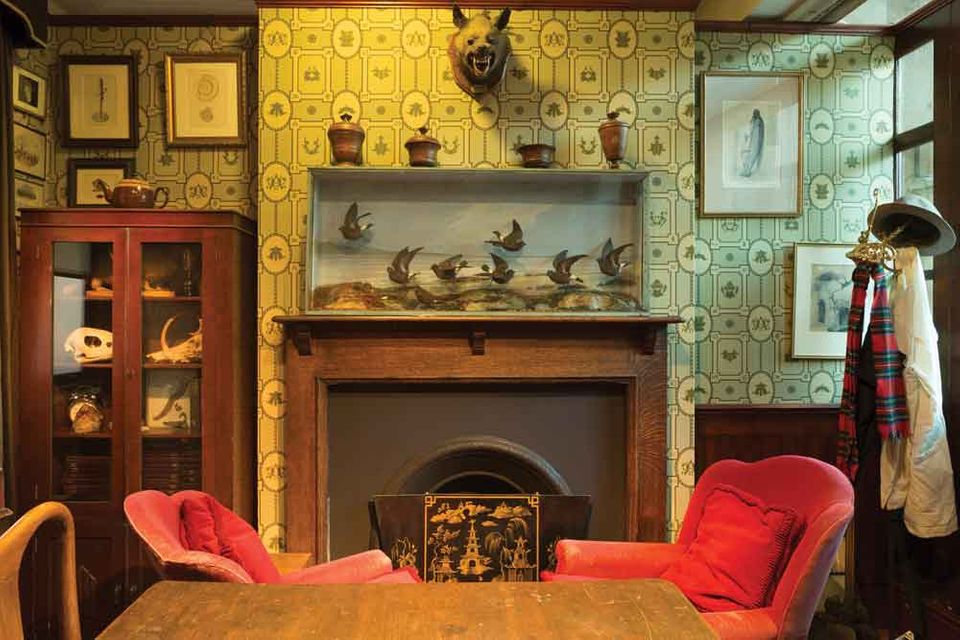 Mark Dion, The Bureau of the Centre for the Study of Surrealism and Its Legacy (2005) Paul Cliff

Mark Dion’s elaborate sculptures and installations use the methods and conventions of the natural-history museum display, the scientific field trip and the archaeological dig. But they do so to question the authority of our institutions and to examine our complicated—and conflicted—relationship with the natural world. For more than 30 years, the New York-based artist has travelled the world, collaborating with scientists, artists, museums and members of the public on works that shake up value systems and cast a critical eye on what we choose to cherish, conserve, exploit and discard. He has dredged a Venetian canal, excavated ancient and modern artefacts from the banks of the river Thames in London and established a marine-life laboratory using specimens from Chinatown in New York. Dion’s solo exhibition Theatre of the Natural World at the Whitechapel Gallery in London, featuring works made between the 1990s and the present day opened this week (until 13 May).

Can’t afford a Balenciaga coat? Then don’t miss the final weekend of Balenciaga: Shaping Fashion (until 18 February) at the Victoria and Albert Museum, where you can use your origami skills to make a paper model instead. The late, great Spanish designer was influenced by art—paintings by Zurbarán inspired an austere black cape created for the Hollywood actress Ava Gardner in 1966—but the designer’s groundbreaking originality shines brightest here, not least in his controversial 1957 invention of the waist-eliminating shift dress. A selfie-tastic showcase of designers influenced by Balenciaga ranges from his pupil Hubert de Givenchy to current Vetements trailblazer Demna Gvasalia, via the sleek chic of a dress by Phoebe Philo for Céline, worn to the Bafta awards ceremony by the British actress Tilda Swinton in 2012. But Balenciaga’s remains the finest work; feast your eyes on his ravishing 1967 dip-dyed pink silk coat dripping with crystals, sequins and pearls.

The earthquake that struck the Moroccan city of Agadir in 1960 and killed one-third of its 45,000-strong population, as recounted by the author Mohammed Khaïr-Eddine in his 1967 novel Agadir, is the starting point for Yto Barrada’s site-specific installation, aptly titled Agadir, at the Barbican’s Curve (until 20 May)—the artist’s first major commission in London. The multimedia work considers how a city recovers and rebuilds after such a disaster. The performance and installation piece comprises a mural, structural installation made out of wicker and sound installation in which actors take the guise of character's from Khaïr-Eddine's novel—a king, a cook, a psychic. Barrada says the piece "explores the relationships between spatial proximity, affect and trauma" in a space that is "as scary as a haunted house". Live performances of excerpts from Khaïr-Eddine's text will be performed by actors from the Guildhall School of Music and Drama throughout the show's run.