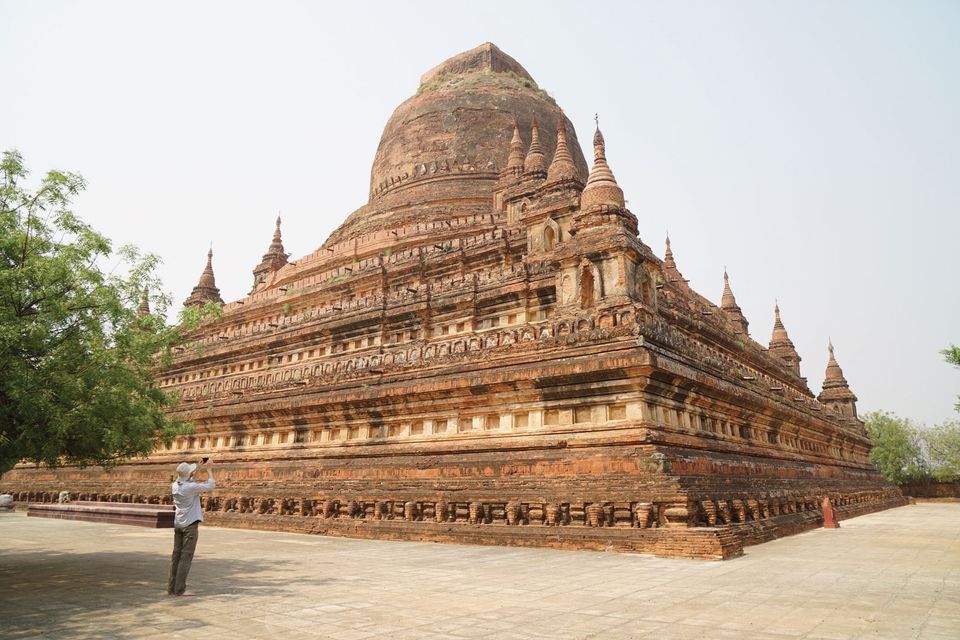 More than 3,600 Buddhist temples in the Getty’s Bagan Conservation Project in Myanmar (pictured: Sitana Gyi Hpaya) have been at risk of looting Courtesy of the J. Paul Getty Trust

Lockdowns, stranded workers, a collapse in tourism revenue, the threat of looting: the stewards of cultural heritage sites across the globe have faced harrowing difficulties over the past year in the face of the coronavirus pandemic. All are still struggling to meet the challenges as the new year begins.

Some international organisations have drafted action plans to help managers of heritage sites cope with the repercussions of Covid-19. The International Alliance for the Protection of Heritage in Conflict Areas (Aliph), for example, has allocated $2m in emergency grants for more than 100 struggling operators in 34 countries.

Among the recipients were stewards like the Cultural Mission in Djenné, Mali, which needed emergency aid to prevent erosion from imminent heavy rains at the Djenné Djeno archaeological site. When the pandemic hit last spring, all work had ceased at the site, which bears witness to a complex pre-Islamic society dating from 250BC. An $11,114 grant went towards salaries and new Covid-19 sanitary protection for workers enlisted to reinforce stone barriers and build new dams.

In Sana, Yemen, Aliph directed a $14,950 grant to protective gear and other support so that 65 employees at the Yemeni Manuscripts House could go back to work on preserving centuries-old documents. Many other Aliph grants went towards digital upgrades, like $15,000 for the Department of Antiquities in Libya to allow for remote working and online training amid the pandemic, and $10,000 for the Palestinian Museum in Birzeit on the West Bank to upgrade its website and develop an e-commerce portal to create better links with artisanal offerings by local craftspeople.

In concert with the Musée du Louvre and the Smithsonian Institution, Aliph also helped arrange digital training for workers involved in the rehabilitation of the repeatedly besieged Mosul Museum in Iraq, which reopened in late November. 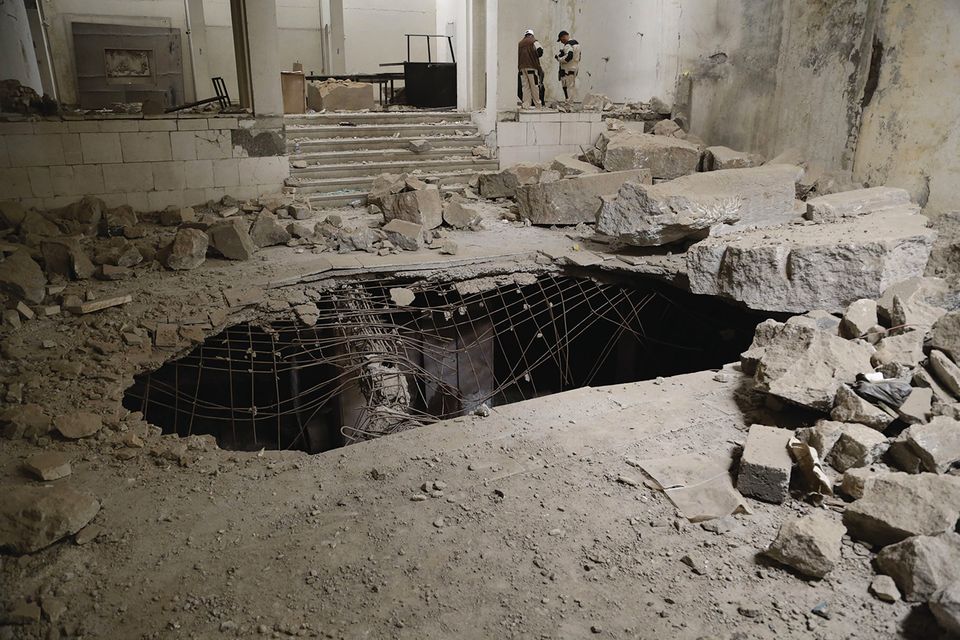 Meanwhile, the World Monuments Fund (WMF) set up a $160,000 relief fund to help cover the salaries of people who were thrown out of work by the pandemic at various sites, according to Bénédicte de Montlaur, president and chief executive of the WMF. Among them were 41 displaced Kurds at the Erbil Citadel in Iraq, where work was suspended from 11 March to 2 May in response to the pandemic.

Similarly, money flowed to 62 technicians at the crumbling Osmania Women’s College in Hyderabad, India—carpenters from Kerala, masons from Bihar, painters from Uttar Pradesh—who were stranded onsite from March until June because of pandemic-related travel restrictions between the country’s states, the WMF says. Work at the early-19th-century building, originally built as an official British residence, has now resumed. 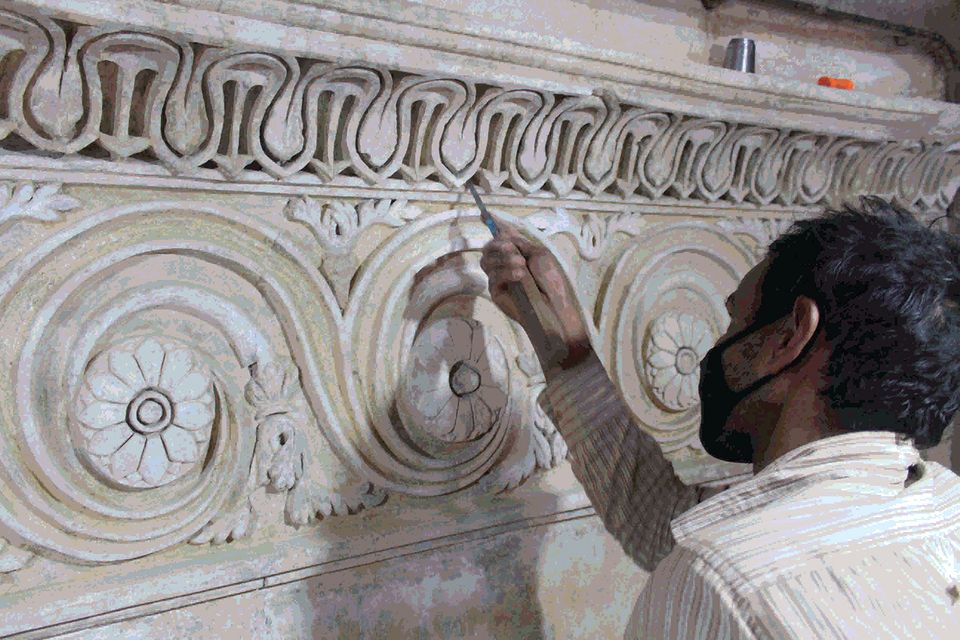 The WMF’s restoration work in the elaborate Qianlong Garden complex in Beijing’s Forbidden City was halted last January and did not resume until May. The organisation shifted its workers where possible to online activities: “As much as we could, we did desk work, drawings of the site, study of the materials” during the hiatus, De Montlaur says. “Whenever possible, we also transferred from in-person training to digital.”

The pandemic also stymied some efforts to jump-start rehabilitation and preservation efforts in Beirut after the port explosion that savaged neighbourhoods there last August, she adds. “Sometimes cultural heritage is an emergency,” she says, “but after Covid it was hard to organise.”

Strikingly different responses to the pandemic in various countries have required organisations to fine-tune their approaches, notes Luis Monreal, the general manager of the Swiss-based Aga Khan Trust for Culture. “It’s been very uneven,” he notes. “In some countries, like Pakistan, there were no government confinement measures. But we had a delay of six months in Kabul” in Afghanistan, where the trust has been rehabilitating historic buildings and public open spaces since 2003. 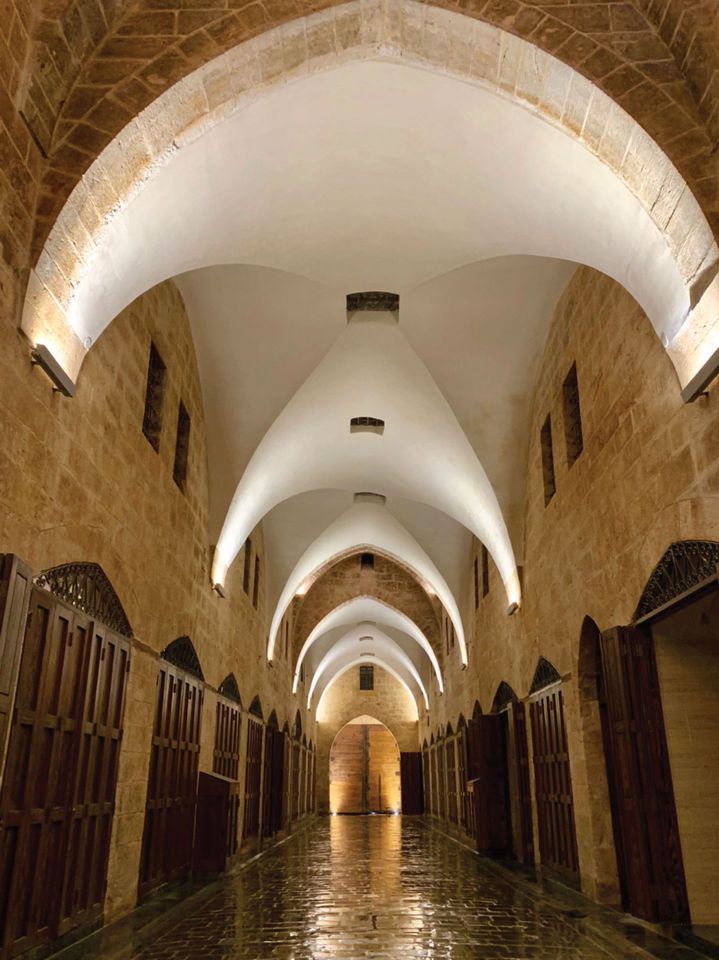 Conservation work, meanwhile, continued in Aleppo, Syria, where the trust managed to complete a rehabilitation of the old city’s medieval central souk, damaged in the Syrian conflict. The trust is now preparing to start work on the renovation of a sagging 15th-century minaret in the Musallah complex in the Afghan city of Herat.

The impact of the pandemic on Unesco’s 1,121 World Heritage sites has been profound. Mechtild Rössler, the director of the organisation’s World Heritage Committee, estimates that as of early April, 71% had been closed and 18% were only partially open. By late November, that figure had improved to just 26% closed and 30% partially open, she adds.

The lockdowns led to the suspension of several projects, such as the effort to develop a management plan for the Chongoni Rock Art Area in Malawi and conservation work at the Scottish former mill town of New Lanark. The shutdowns and the evaporation of tourism have been ruinous for local economies and for the sites’ maintenance budgets, Rössler also notes.

“Many sites are constantly suffering from [insufficient] funding, but now even more due to the lack of income from national sources, projects and tourism activities including entry fees and broader visitor services,” she says.

Many sites are constantly suffering from [insufficient] funding, but now even more due to the lack of income from national sources, projects and tourism activities Mechtild Rössler, Unesco World Heritage Committee

The International Council on Monuments and Sites (Icomos), a network of experts on heritage conservation, reports that the steep decline in income from visitors has made it impossible to finance maintenance and management at the Ingapirca Archaeological Complex in Ecuador, for example, a World Heritage site and the country’s largest known site of Incan ruins.

In Nigeria, the pandemic resulted in the suspension of maintenance and security at the ancient earthen Kano City Walls and Gates, and a far faster rate of wear and tear, Icomos adds.

Susan Macdonald, head of buildings and sites for the Getty Conservation Institute (GCI), reports setbacks in the Malaysian city of Penang, where the collapse of international tourism has inhibited urban conservation efforts.

Maja Kominko, Aliph’s scientific and programmes director, says that the anticipated decline in cultural funding from governments and philanthropists is also deeply worrying. “The analysis shows a move toward funding health care and the environment,” she says. “That makes the demands on the funding that now exists even bigger.” Aliph’s emergency grants “showed us that $10,000 can make all the difference in the world, but we have to listen carefully. All organisations were thinly stretched, but now it’s even more complicated.”

At the same time, the threat of looting at poorly staffed cultural sites remains omnipresent. Macdonald of the GCI points to concerns about its conservation site at Bagan, Myanmar, where project partners have to monitor more than 3,600 Buddhist temples to ensure that the site remains secure. 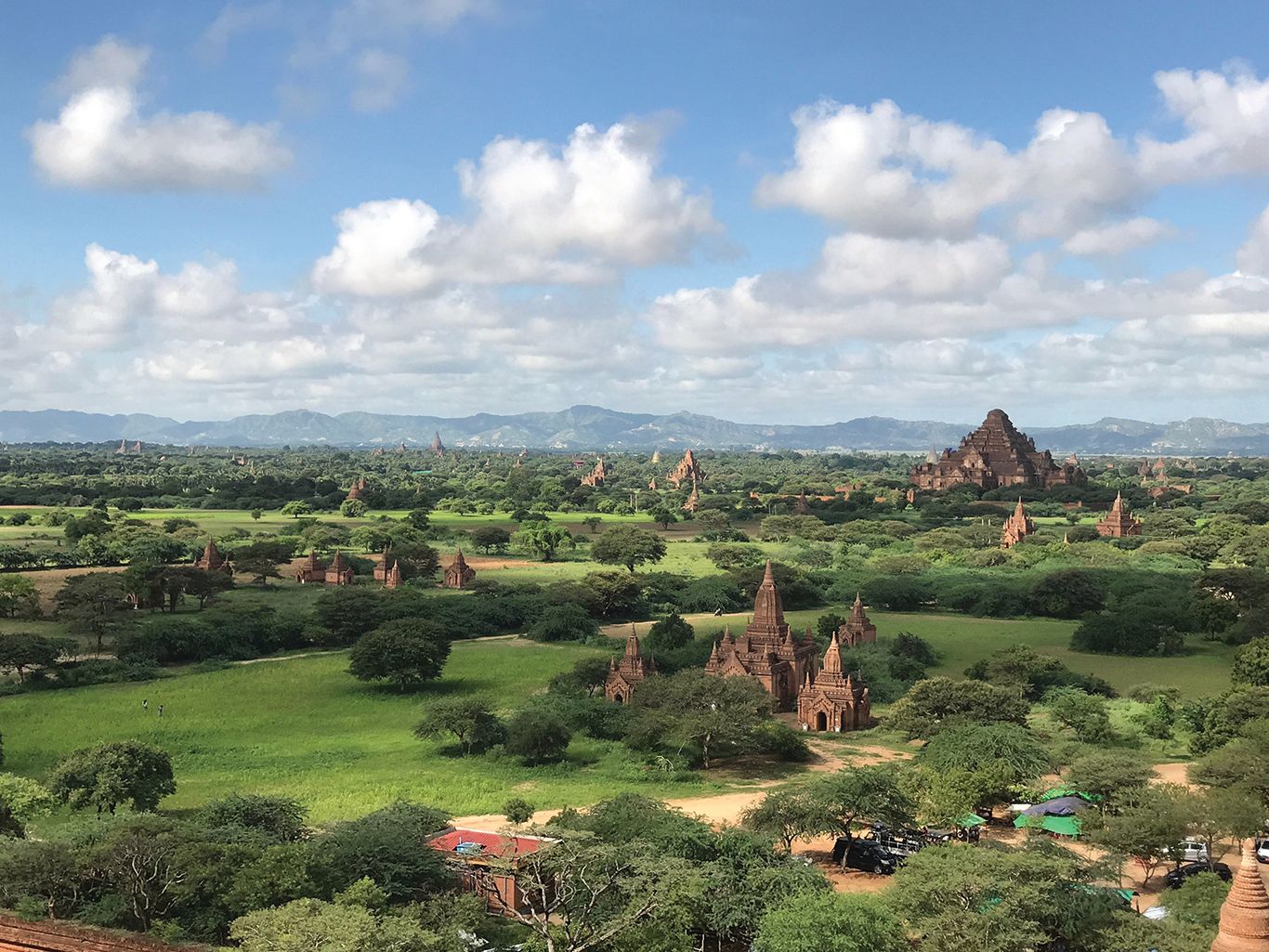 The Bagan archaeological site in Myanmar, which has been threatened by looting during the pandemic J. Paul Getty Trust

“At Bagan, looting of temples involves excavating into the brick structure to look for precious offerings made during past repairs and original construction,” she says. “As income for people disappears, the looters take advantage of these times of crisis.” Some see a potential solution in Unesco’s recent use of drones to monitor nature-based sites like the Djoudj National Bird Sanctuary in Senegal Park after training rangers to monitor the ecological data they collect.

The Antiquities Trafficking and Heritage Anthropology Research Project, or Athar, led by anthropologists and heritage experts tracking illegal trafficking in stolen artefacts, reports that the online illicit trade in looted objects spiked after the pandemic hit, markedly in March and April. The project’s co-director Katie Paul suggests that the authorities who police heritage sites were diverted by the need to enforce restrictive pandemic measures and also saw their ranks depleted by job losses related to an economic downturn amid massive closures and the halt of tourism.

In Egypt, Paul says, looters were posting videos of their progress. “This activity is incredibly dangerous, and collapses [of sites] can happen easily as we saw from a [Facebook] video posted by a user in Jordan back in March at the start of the pandemic,” she reports. 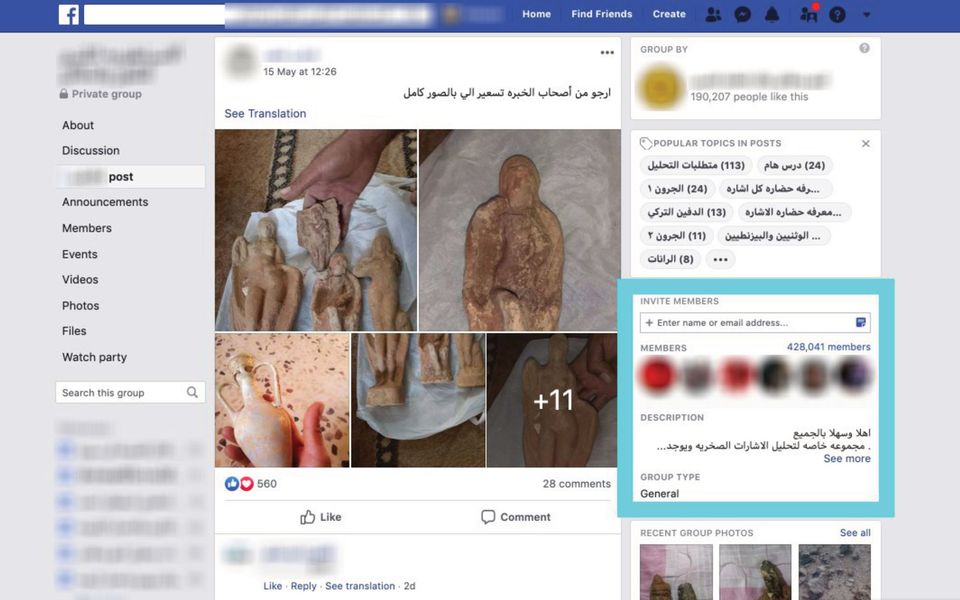 According to heritage experts from Athar, Facebook's black market groups for antiquities grew rapidly during the pandemic Courtesy of Antiquities Trafficking and Heritage Anthropology Research Project

Yet in some narrow cases the pandemic has had a silver lining. Rössler notes that the steep decline in tourism allowed technicians in Angkor Wat in Cambodia to step up their conservation work in the absence of crowds, for instance.

With no sign that international tourism will soon resume, many organisations are rethinking their models for protecting heritage sites in the future. They now acknowledge that “overtourism” was causing severe overcrowding at many sites and threatening the long-term stability of their cultural treasures. They see wisdom in reducing travel by their own employees and relying more on local partners to get things done. And they take heart from the online Zoom training sessions and conferences that have cemented relationships between conservation technicians around the world that will doubtless continue.

To help ensure that tourism becomes less damaging once it returns, Unesco has created a task force on culture, tourism and Covid-19 in collaboration with Icomos, the International Union for Conservation of Nature and the International Centre for the Study of the Preservation and Restoration of Cultural Property.

Rössler points to the example of Machu Picchu in Peru, which reopened in November after eight months of closure due to the pandemic (it closed again briefly from 14 to 19 December following security concerns amid local protests). In a boon to the ancient Incan site, just 675 tourists are allowed in each day, 30% of what was permitted before Covid-19 forced the site to close. The Peruvian authorities organised a traditional Incan ritual in November to thank the gods. “I am carefully optimistic,” Rössler says, that officials can “embrace new models”.