Trouble is brewing at the Tulsa Artist Fellowship 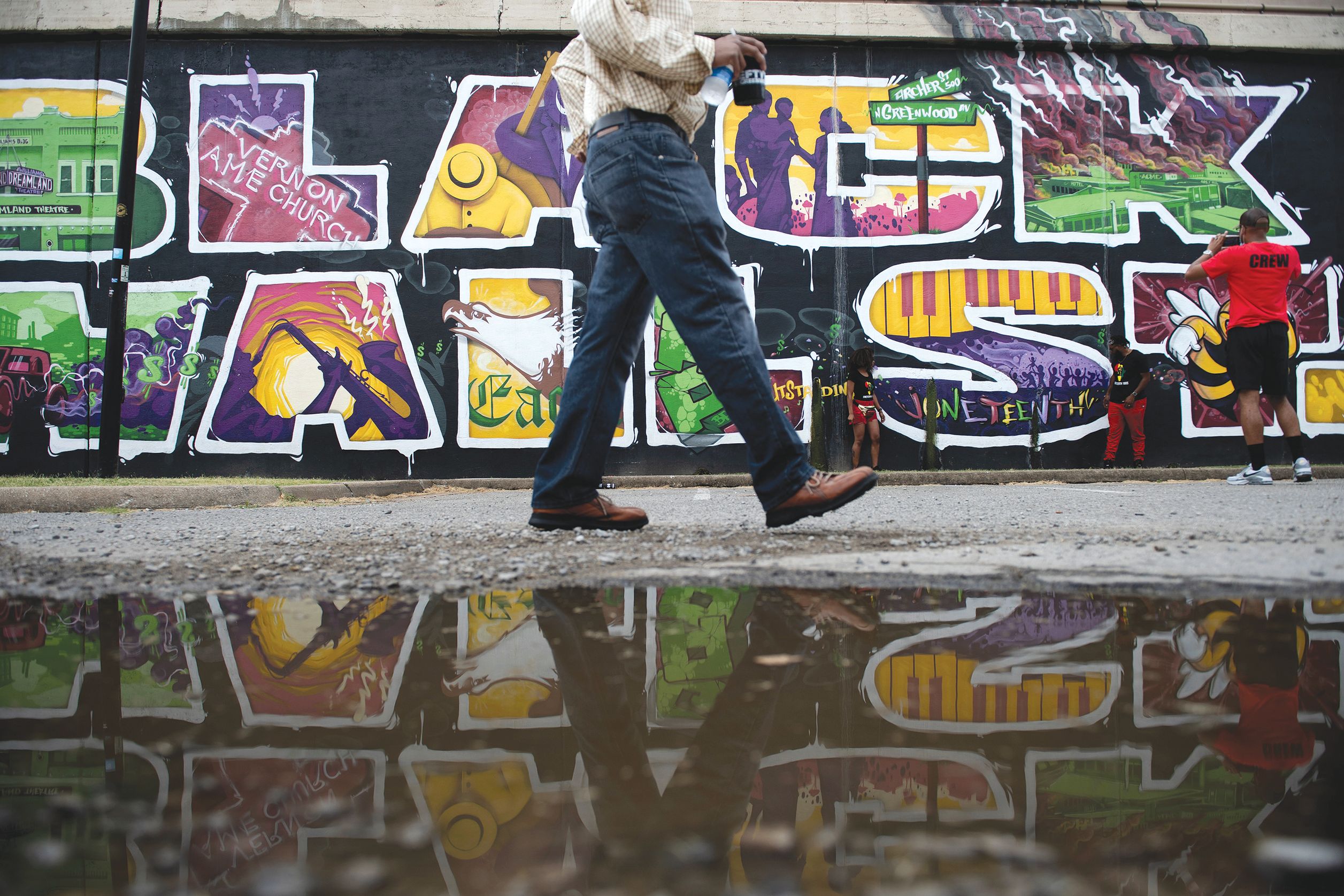 This mural in Tulsa’s Greenwood District marks the Black Wall Street massacre of 1921, where artists now have studios through the Tulsa Artist Fellowship © Brendan Smialowski/AFP via Getty

The Archer Studio Building in downtown Tulsa, Oklahoma is located on what was once Black Wall Street. It has big windows and the artists who occupy the building, participants in the Tulsa Artist Fellowship (TAF), are meant to keep these windows open and unobstructed whenever possible, so that passersby can see them at work. The windows can also make artists vulnerable.

On 22 February, Naima Lowe, an interdisciplinary artist in her second year of a fellowship, was working in her ground floor studio when a group of children began yelling and pointing toy guns at her window. She first turned out the light, thinking they might leave, but they did not. She went out into the alley to confront them, in part out of concern for their safety—they were Black children wielding pretend weapons. They threw rocks and a brick at her before running away. Although shaken, Lowe did not call the police. “Nothing good ever comes from being Black and in a heightened emotional state around police,” she says. Instead, she alerted fellowship staff.

The incident set off a series of events. Lowe says she approached the programme’s director, Carolyn Sickles, about safety concerns two days before receiving a letter from a lawyer for the influential Tulsa-based George Kaiser Family Foundation (GKFF), which funds the fellowship, claiming she had breached her contract. At a mandatory meeting in March, Lowe was told she had engaged in harassing behaviour by “inappropriately airing grievances” and endangered the community by venturing out into the alley alone. The fellowship administration gave her 72 hours to sign an agreement promising, among other things, not to endanger the community again, and not to discuss “programme needs” with advisory committee members, foundation staff or the public. While she negotiated for more time, and eventually signed a version of the document, she left the programme in August 2020, five months before her fellowship was due to end.

Administrators at the foundation and the fellowship declined to comment for this story, citing an inability to speak on personnel issues. In a statement, the director Carolyn Sickles says the fellowship “is committed to fostering an equitable environment where a diverse and inclusive community of artists and arts workers have the opportunity to thrive professionally”. She adds that “safety is of the utmost importance” and “no one should experience violence or feel unsafe while in our programme” but continues that the anti-harassment policy “includes the agreement to not engage in the internal or public defamation of the institution or of the personal or professional character of staff and other artists”.

Perils of speaking out

Other current and former fellows recounted similar instances after questioning the programme or the foundation. Arts organisations across the US are under increased scrutiny, and residencies are not immune. Former fellows of Provincetown’s Fine Arts Work Center issued an open letter in June, citing some of the same issues the Tulsa fellows have complained about: censorship, retaliation, performative ally-ship and a lack of accountability. “I’ve been trying to give them the benefit of the doubt,” says a former member of the Tulsa fellowship’s advisory committee, who asked to remain anonymous. “But it is not just incompetence when a Black woman is attacked on your property, and then your response is to haul her in to a confrontational meeting with an attorney.”

Since 2015, the Tulsa Artist Fellowship has offered a unique level of support. It prioritises opportunities for Native American artists and artists of colour, providing studios, housing and a $20,000 stipend for one year, with the option to re-interview for a second year. In exchange, fellows agree to stay in Tulsa full time for 39 weeks annually and “integrate” into the city, a requirement reflecting GKFF’s larger aim of raising Tulsa’s cultural profile. The foundation, created by a man with an oil fortune who purchased the Bank of Oklahoma in 1991, says its programme meets artists’ most pressings challenges: “financial stability, durational housing, quality studio space and multidisciplinary platforms for presentation”. But this need for housing and studio space has also led many artists involved in the programme to worry that voicing their concerns could jeopardise their situations. “Artists don’t go to Tulsa from wherever they’re based for $20,000 and a studio because we’re so comfortable, right?” said the writer Anna Badkhen, a fellow from 2017 to 2018.

The fellowship’s founding director, Julia White, now in real estate, took the helm after administering a park founded by the Kaiser foundation. The studio building was under renovation and uninhabitable when inaugural fellows arrived, and fellows attributed this to the staff’s lack of art experience but also noticed bigger issues. Antonius Bui, a 2017 fellow, exhibited emails to the foundation’s leadership in an end-of-year exhibition, outlining experiences of discrimination and feeling undermined by staff. In 2018, Sickles, formerly director of visual arts and engagement at New York’s Abrons Art Center, became executive director. Although Sickles better understood artists’ needs, problems persisted, including concerns over an increasingly restrictive contract.

Fellows describe the contract growing in length and complexity each year they were in the programme. Among other stipulations, the now 25-page contract requires all fellows to follow the code of conduct (even in their homes), keep studio windows ­uncovered when possible, formally alert the administration of any weekday departure from Tulsa longer than 24 hours, and avoid “unjust, malicious statements” about the fellowship and the Kaiser foundation. The confidentiality clause prohibits sharing the agreement with any outside individual. “A lawyer could be this ‘outside person’,” says Badkhen, adding that many fellows’ hesitated to seek counsel. Advisory committee members who spoke anony­mously say they also questioned the contract. But the fellowship dissolved its advisory committee in June. Sickles says in a statement that they are working with an “equity centered consulting firm to establish a new advisory framework in addition to assessing our policies and procedures”.

Fellows also say they experienced pushback when discussing gentrification and racism in Tulsa. Organisations associated with George Kaiser own and lease multiple cultural centres, residential and commercial buildings in Tulsa’s Arts and Greenwood Districts, the same gentrifying neighbourhoods where the fellowship is based. Its main studio building is located on Archer Street, one of the streets where the 1921 Tulsa Race Massacre took place, when the city’s Black community was razed and hundreds injured by white rioters after a Black shoeshiner was falsely accused of assaulting a white woman. While the fellowship now acknowledges the massacre on its website, multiple former fellows say they did not know before arriving. “I’m not saying down the street, or a mile from there—the very street where I lived and worked was on the site of a massacre of African-American people,” says artist Heyd Fontenot, who left the programme before his term ended in 2019.

At a fellowship event in 2018, Badkhen, who had recently published an essay referencing current gentrification and the violent history of racism in Tulsa, brought up the fellowship’s role as a tool of gentrification. Afterwards, she says, communication and marketing director Abby Mashunkashey asked to meet. “She was intimating they were unhappy with what I was saying,” Badkhen says.

In May 2019, as part of a collaborative night of performances, current fellow Lucas Wrench gave a lighthearted performative lecture on how George Kaiser accumulated his wealth. According to multiple accounts and video footage from attendees, Mashunkashey interrupted the performance, making a call while pacing in front of the crowd and gesturing for Wrench to stop.

Current and former fellows acknowledge that the programme allowed them to focus full time on art, but some doubt they would have accepted the residency if they had known more about it. Bui, who left the fellowship after only eight months in 2017, has spoken out since then for the sake of future fellows. “It’s easy to speak when you believe in the transformative power of art,” they said. “I don’t think the Tulsa Artist Fellowship really believes in that.”

Lowe takes a more measured perspective. “I’m probably risking some retaliation from [the foundation] for going on record, but it feels important,” she says. Lowe moved out of her fellowship-provided apartment this summer and into more affordable housing in Tulsa. She has upcoming exhibitions and a growing network and plans to stay for now. “I’m doing the thing that TAF claims to want for their fellows,” she says.