The US artist Jim Shaw takes a swipe at President Trump in a new series of works due to go on show at Simon Lee Gallery in London later this month. The exhibition, Hope Against Hope (20 October-16 January 2021) includes images of Trump and First Lady Melania descending into Hell ahead of the US presidential election on 3 November. “I am hoping that Trump will become irrelevant after the votes are counted, though his legacy will haunt us for decades to come,” Shaw tells The Art Newspaper.

A recent painting shows Trump and his wife descending an escalator into Dante’s Ninth Circle of Hell. “Since the Ninth Circle is where traitors are encased in a sea of reflective ice, I thought it a good place to bring in the image of toxic narcissism, something Trump and Lucifer have in common; there are a number of his now discarded associates trapped in the ice, reflecting on decisions they likely regret,” Shaw says. The silkscreen print, which resembles an etching, is inspired by the 19th-century printmaker Gustave Doré.

The other Trump painting, The Master Mason (2020), is based on a US painting, or mural, of George Washington setting a cornerstone in a Masonic ritual. “Trump is surrounded by enabling sycophants who mostly share his xenophobic wall building mania,” Shaw says. 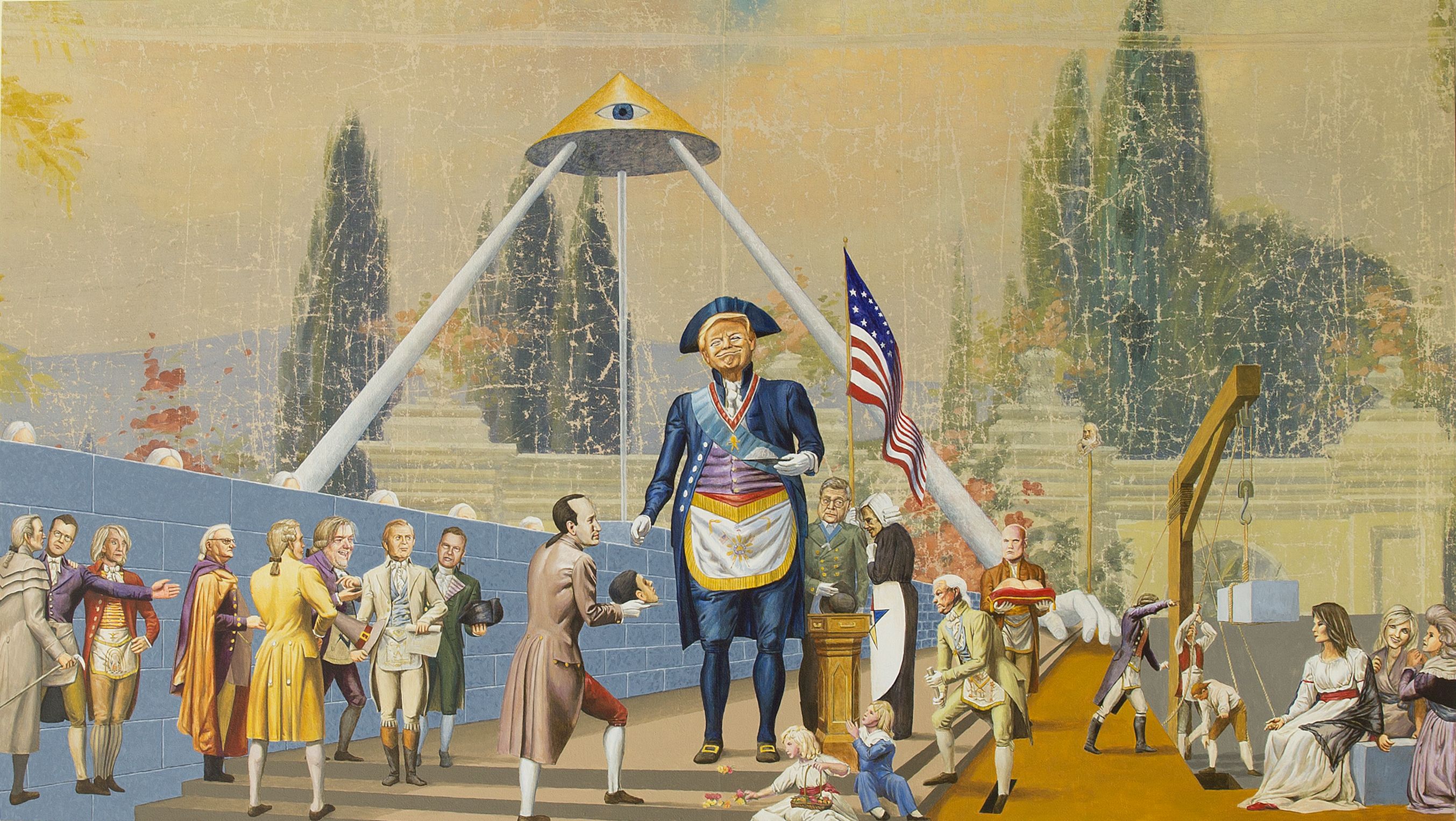 Shaw is also critical of art world excess, with the painting One Percent for Art (2020) a caustic comment on capitalism and inequality. “The work is inspired by the title term, which refers to the amount a major building project must legally devote to works of art in California and New York… That money could go [towards] a theatre, a bunch of framed prints, funding of performance art, but stereotypically it went to something like a [Alexander] Calder stabile [sculpture], or a [Anthony] Caro or a [Mark] Di Suvero, often red,” he says.

Shaw adds: “I thought to transpose the art object as a Hydra that grows another head as you cut one off, thus the artist may see themselves as a heroic figure… It relates to the conundrum of the artist’s symbiotic relationship to the collector, who is almost certainly a member of the one percent—who else could afford the extremely high prices contemporary art costs?”

Shaw is known for his dystopian scenarios and satirical depictions. In Art Basel’s online viewing rooms in June, he showed Deutsche Bank Wealth Management Lounge (2020; priced at $50,000), which swapped well-heeled VIPs for sacks of roubles with garish faces.

He is candid about the extent of his influence though, saying: “I fully understand that what I do in the art world is preaching to the choir, and I’m too unsavvy at internet meme-ing to reach the real public, but I do hope that these things can leak into the wider world. Mockery may not topple tyrants, but it’s still one of the few weapons we have.”