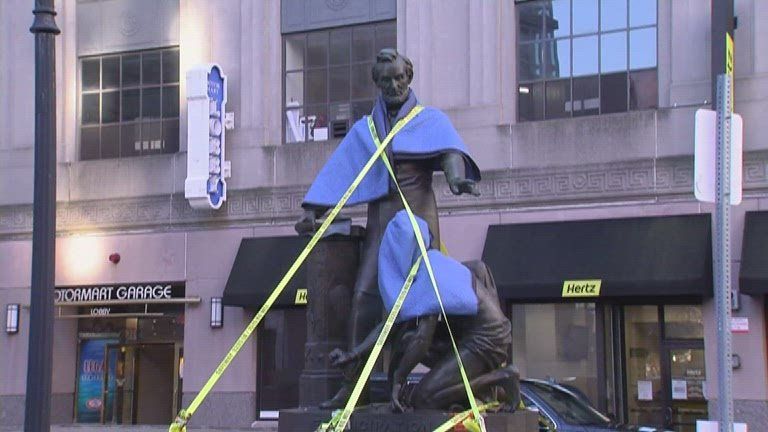 The Emancipation Group statue was removed and towed away from Park Square, Boston courtesy Kobi 5TV

A statue of a slave kneeling before President Abraham Lincoln has been removed from Park Square in Boston, US, after more than 12,000 people signed a petition initiated by artist Tory Bullock calling for it to be replaced. The controversial Emancipation Group sculpture, designed by Boston artist Thomas Ball, has been in place since 1879 and was designed to show the emancipation of slaves after the Civil War.

But it has come under scrutiny, along with other historic statues across the US, in the wake of the Black Lives Matter protests and the death of George Floyd in May. The sculpture is a bronze recasting of Freedmen’s Memorial by Ball (1876) which still stands in Washington DC’s Lincoln Park.

Bullock says in the petition “I've been watching this man on his knees since I was a kid. It's supposed to represent freedom but instead represents us still beneath someone else. I would always ask myself ‘If he's free why is he still on his knees?’ No kid should have to ask themselves that question anymore.”

The City of Boston website says that the statue “was a donation to the City from Moses Kimball, a politician and founder of the Boston Museum. Ball’s statue depicts a mostly undressed Black man with broken shackles, rising from his knees beside a suited, standing Abraham Lincoln. Lincoln holds the Emancipation Proclamation in his right hand.”

A spokeswoman for the mayor, Marty Walsh, told CNN however: "The decision for removal acknowledges the statue's role in perpetuating harmful prejudices and obscuring the role of Black Americans in shaping the nation's fight for freedom."

The Boston Art Commission voted to remove the Park Square work over the summer; the motion passed recommended bringing in a conservator “to document, recommend how the bronze statue is removed, supervise its removal and placement into temporary storage”. The City will now try and find “a new publicly accessible location where it could be better explained,” said city mayor Marty Walsh in a statement.

Mark Pasnik, the chair of the Boston Art Commission, told local press that new works will be installed in Park Square, adding that he plans to launch “a series of virtual panel discussions and short-term art installations examining and reimagining our cultural symbols, public art, and histories.”

The equally contentious replica in Washington DC continues however to polarise opinion. In June, David Blight, Sterling Professor of History at Yale University, wrote in The Washington Post: “Rather than take down this monument to Lincoln and emancipation, create a commission that will engage new artists to represent the story of black freedom from one generation to the next.”

The controversial Emancipation Group statue in Boston has been taken down. In June, an online petition called for the statue's removal and in July, the Boston Art Commission voted unanimously to take it down. |
Read the full story --> https://t.co/CboKT9WdzN pic.twitter.com/8W6yn2Uh4f