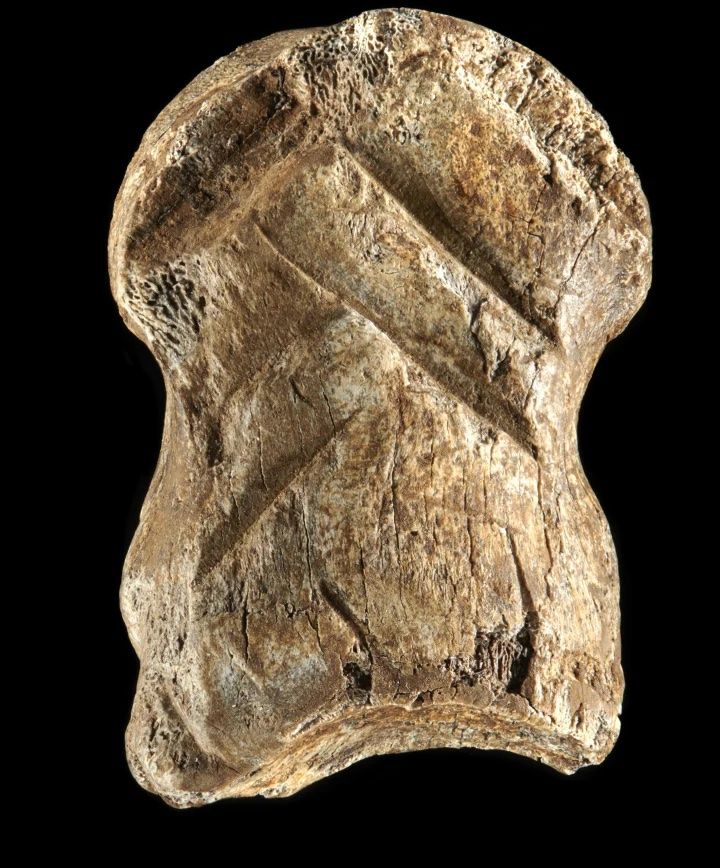 Tests carried out on the artefact suggest it is at least 51,000 years old Photo: V. Minkus / Courtesy of Lower Saxony Office for Heritage

A mysterious bone discovered in a cave in Germany inscribed with ten deep, slanting lines may be a work of art created by Neanderthals, say a team of German researchers in a paper published this week in the journal Nature Ecology and Evolution.

The artefact, identified as the toe bone of a deer, was found at the entrance of Unicorn Cave in West Harz, around 150 miles southwest of Berlin, in 2019. The small bone is decorated with a geometric pattern consisting of three uniform parallel lines set amongst other engravings.

Tests carried out on the piece suggest it is at least 51,000 years old. “It’s the start of culture, the start of abstract thinking, the birth of art,” Thomas Terberger, a prehistoric archaeologist at the University of Göttingen told National Geographic magazine.

In the academic paper, the researchers including Terberger say that “the engraved bone demonstrates that conceptual imagination, as a prerequisite to compose lines into a coherent design, was present in Neanderthals [early humans who died out around 40,000 years ago].”

The researchers argue that the piece is not a pendant, adding that “the base of the phalanx [bone] is suitable as a platform on which the item stands upright, with the chevrons [marks] pointing upwards. This orientation is also suggested by the incisions at the base of the phalanx. A designation as a premeditated object that had symbolic meaning is thus the most plausible interpretation for the incised bone.”

“We have an early glimpse into the mind of a Neanderthal, and we are looking at the very first step in something bigger to come,” Dirk Leder, from the State Service for Cultural Heritage, Lower Saxony, told the Times newspaper. “We are looking at early representations of modern thinking.”