'You don't need a gallery to show ideas': Orit Gat on Seth Siegelaub at the Stedelijk

Seth Siegelaub reinvented himself—twice. The New Yorker, who lived a majority of his life in Europe, began his lifelong involvement with art and culture by opening Seth Siegelaub Contemporay Art and Orientalist Rugs on 56th Street in New York in 1964. The gallery presented work by an emerging generation of artists we now associate with conceptual art, but it was open for only two years. After it closed, Siegelaub continued to organise exhibitions internationally with artists like Lawrence Weiner, Joseph Kosuth and Douglas Huebler. In 1973, Siegelaub moved to Paris and spent the next 16 years publishing left-wing theory, focusing on media studies. He moved to Amsterdam in 1989 and founded the Center for Social Research of Old Textiles (CSROT), reflecting a lifelong interest in collecting textiles.

The above timeline is reflected in the exhibition Seth Siegelaub: Beyond Conceptual Art at the Stedelijk Museum in Amsterdam, where individual galleries are devoted to art, politics and textiles, organised as a linear progression through Siegelaub’s various projects. The exhibition design is inventive and informative: the space is an open plan with the exception of three small rooms where the walls do not reach the ceiling. In the section dedicated to Siegelaub’s New York gallery, there is a small presentation of archival material such as the visitors' book and a number of works of art that were in the gallery's collection. Another space is a recreation of the showroom Siegelaub put in his Madison Avenue apartment and another re-stages an exhibition titled January Show from 1969, original wall texts and all. (A note outside the room explains that for “reasons of historical accuracy”, updated specifications for the works on view are available outside the gallery.)

Apart from these remounted exhibitions, the art section does not display as much art as it does information. Siegelaub’s projects give themselves willingly to an exhibition based on documentation, and his archive (now at the Museum of Modern Art in New York) is rich with all sorts of photographs, texts, catalogues and notes. The displayed documents are all unmistakably from the 1960s but do not feel dated. Rather, they read like dots connected by different moments and movements in the history of art. Take, for example, a photo of Lawrence Weiner, Robert Barry, Carl Andre and Dan Graham smoking cigarettes onstage during a panel about an exhibition by the first three artists at Windham College in 1968. That outdoor presentation, organised by Siegelaub immediately following a similar project at Bradford College in Massachusetts, is an example of the proximity of conceptual art to the contemporaneous rise of land art: since the college had no gallery, the site-specific projects were embedded in the landscape of the now-defunct school.

Another photograph shows Kosuth seated in front of Siegelaub (who is wearing only his boxer shorts) in Siegelaub’s living room. The intimacy between the two men reveals a blind spot in Siegelaub’s practice that the exhibition never discusses: that he worked with the same group of artists throughout his career—and that group included no women. Look at the cover of the seminal exhibition-in-a-book Xerox Book from 1968, one of Siegelaub’s defining moments. It lists the participating artists: Carl Andre, Robert Barry, Joseph Kosuth, Sol Lewitt, Robert Morris, Lawrence Weiner—the absence of a single woman is jarring. 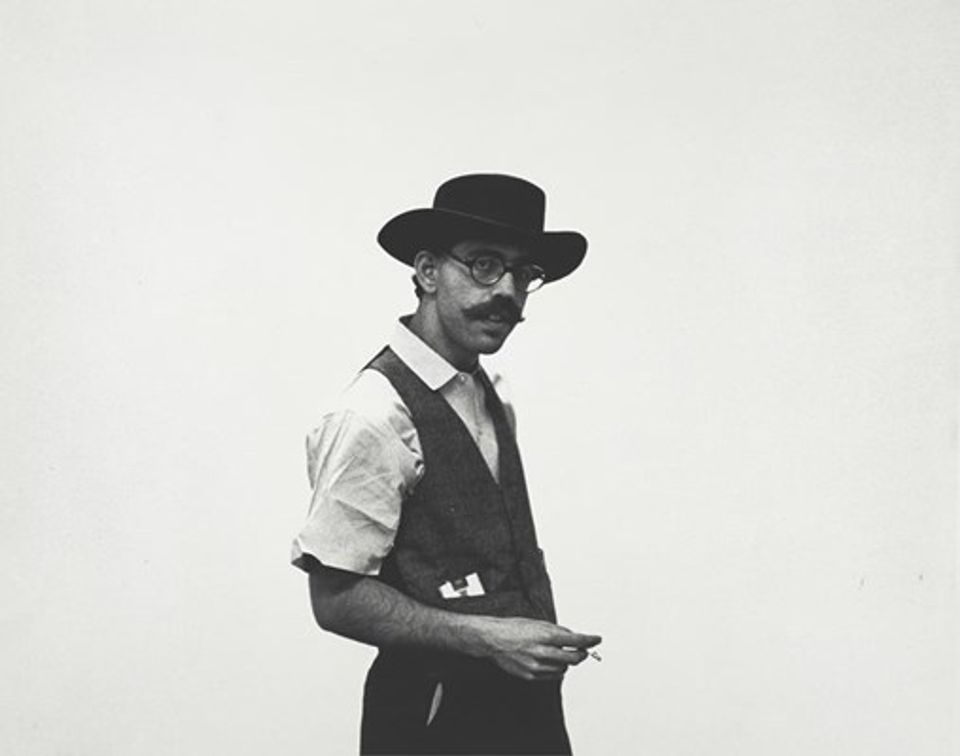 In fact, the only woman mentioned in the exhibition is Adrian Piper, who worked the front room of the office Siegelaub rented for the January Show. That exhibition, a continuation of the concerns of the Xerox Book, was meant to upend the relationship between the exhibition and the catalogue. The four featured artists—Weiner, Kosuth, Barry and Huebler—each made two works for the gallery, but an entire suite was se t aside so visitors could browse through (and possibly buy) the catalogue, which included 32 works and was the real focus of the show.

Considering the title of the current exhibition, Beyond Conceptual Art, and the central role books played for Siegelaub, there might have been a better way to show Siegelaub’s publishing house activities. Though the exhibition design is original and impressive, this section—with a library and a semicircular table displaying copies of the books Siegelaub published—is lackluster. The presentation of archival materials and projects pales in the politics section, which is also the smallest part of the exhibition. In contrast, the textile collection that Siegelaub began building in the 1960s, and which he focused on in the last decades of his life, is shown in a series of vitrines. Wandering through the mazelike path between the vitrines, the viewer can focus on specific exhibits. At the end is a small staircase, allowing for a bird’s-eye view of the whole installation.

At the Stedelijk, some of the books Siegelaub amassed as part of CSROT are present, but also in vitrines. Although (or exactly because) the vitrine assembly is beautiful and gives a sense of the breadth of Siegelaub’s interests, the textile collection, unlike the conceptual art area and the library, looks like an art exhibition, which takes away from the overall strength of the show as a display of information.

At the far end of the exhibition is a screening room showing The Causality of Hesitance (2015), a video by Mario Garcia Torres. Commissioned for the exhibition, it is a monologue about causality and theories of time. This branch of physics was, apparently, of interest to Siegelaub. In the accompanying text, Torres says that one “could argue a straight line leads from early conceptual art to this topic.” But the film doesn’t make this argument and it feels mainly like amateur science. The idea of a newly commissioned piece to accompany a historical exhibition heavy with texts and documents is great, but there are no thematic or stylistic connections between Torres’s project and Siegelaub's.

The textile collector, the publisher, the curator, the dealer—they were all the same curious intellectual who taught himself about art by reading at the New York Public Library. “You don’t need a gallery to show ideas,” Siegelaub famously said after he closed his New York space. The show Beyond Conceptual Art proves one more thing: that you also don’t need art to make a show about ideas. Though the exhibition is bookended by wall texts by Lawrence Weiner and a mural by Sol Lewitt, and although it includes a newly commissioned film, its contribution is in displaying information as a singular history, and introducing it exactly where it belongs: in the gallery space it so very much affected.

Orit Gat is a writer based in New York and London. She is the features editor of Rhizome and managing editor of WdW Review.

about 14 hours ago
Hackneyed old Hockney: Museums need to be courageous, even in survival mode