From crumbling castles to beach huts and giant chalk drawings on the English coast, there's no need for PCR tests if you live near these local gems

It’s been a fraught year. As the pandemic fades in Europe and North America, our societies are opening up again after months of lockdown and summer is luring us out of the cities in search of rest and relaxation. Both art and country walks are known to promote mental health. So combining them should surely be the equivalent of a spa treatment for the mind—and we could probably all use that.

We have compiled a selection of rural art locations easily reachable from the cities where many of us live—whether a palace outside Berlin, colourful beach huts on English coast or cutesy sheep sculptures in Massachusetts. 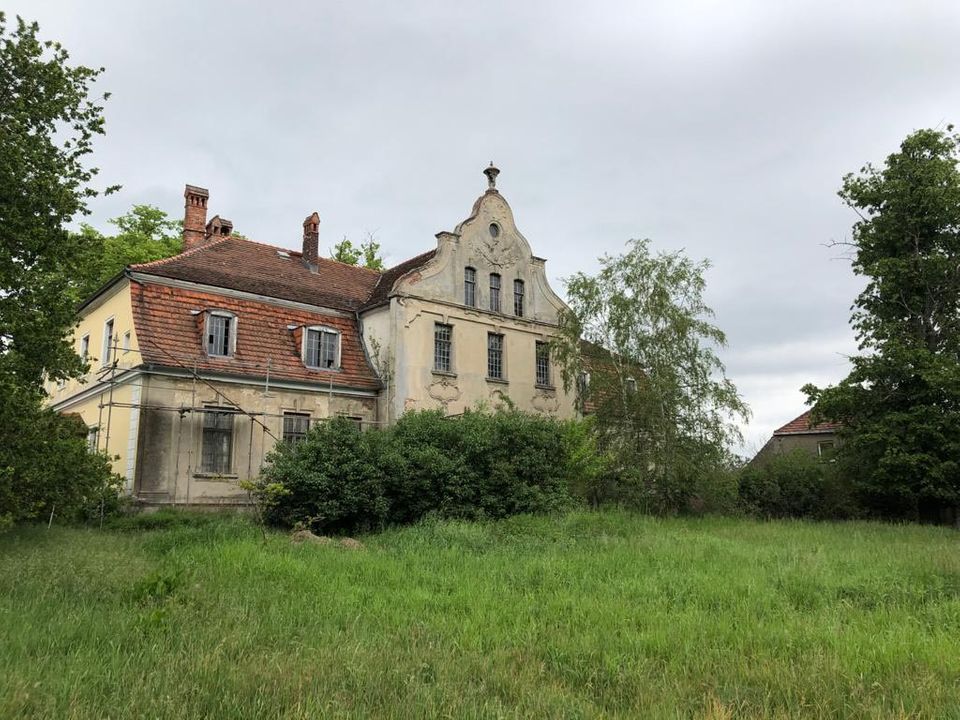 Long before the pandemic struck, art dealers had identified what has become known as “fair-tigue” and were looking for more intimate settings to display their wares than big international congress centres. Kristin Hjellegjerde Gallery had experimented with a venue in a former shrimp factory on the Norwegian coast. “We found that small events get a lot of positive feedback,” says Eva Maria Ostendorf, who runs the gallery in central Berlin.

So this year, for the first time, Hjellegjerde Gallery will be showing art at a ramshackle stately home 70km west of Berlin from 7 August, and plans to organise a shuttle run from central Berlin for the opening weekend. The gallery has a diverse roster of young emerging artists: Chris Agnew, Maha Ahmed, Rebecca Brodskis, Wendimagegn Belete and Caroline Jane Harris are among those whose works will go on display in the Schloss, which is about to undergo renovation.

Stalls will offer visitors local produce such as honey and meat as well as snacks. The gallery also plans some outdoor events, including a concert at the end of the show in September. 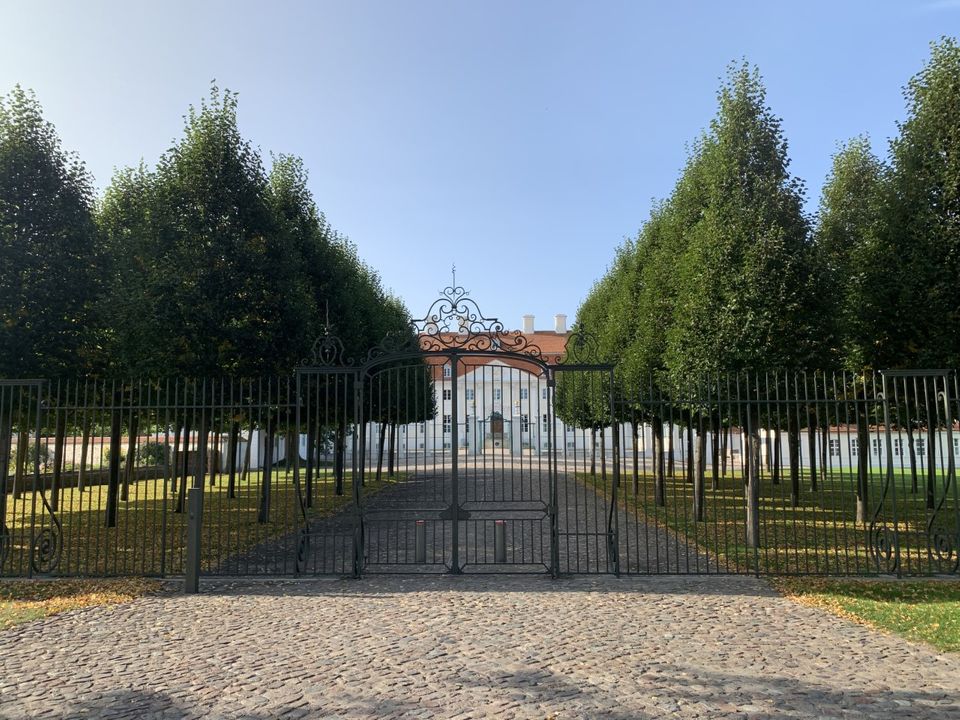 Guests at the opulent Baroque palace in Meseberg—which provided the inspiration for Theodor Fontane’s novel Effi Briest—have included the Russian President Vladimir Putin and the French President Emmanuel Macron. An hour north of Berlin in a pretty village by a lake in the Brandenburg countryside, it serves as the government’s guest-house and retreat—the German equivalent of Chequers in the UK or Camp David in the US.

This summer, for the first time, a barn opposite the palace will play host to Berlin’s Galerie Nagel Draxler, which will exhibit works by Mark Dion, Lone Haugaard Madsen, Gang Zhao and Mirjam Thomann among others from 10 July to 28 August. The surrounding land will be transformed into a sculpture garden.

The gallery has purchased a gutted house opposite the village church and is planning to convert it into what Saskia Draxler calls “the farm office” and “farm gallery”: a rural location where it will hold exhibitions with a guesthouse for clients. It is intended, she says, as a place to spend “quality time with collectors; a place to rest and focus on the essence.” 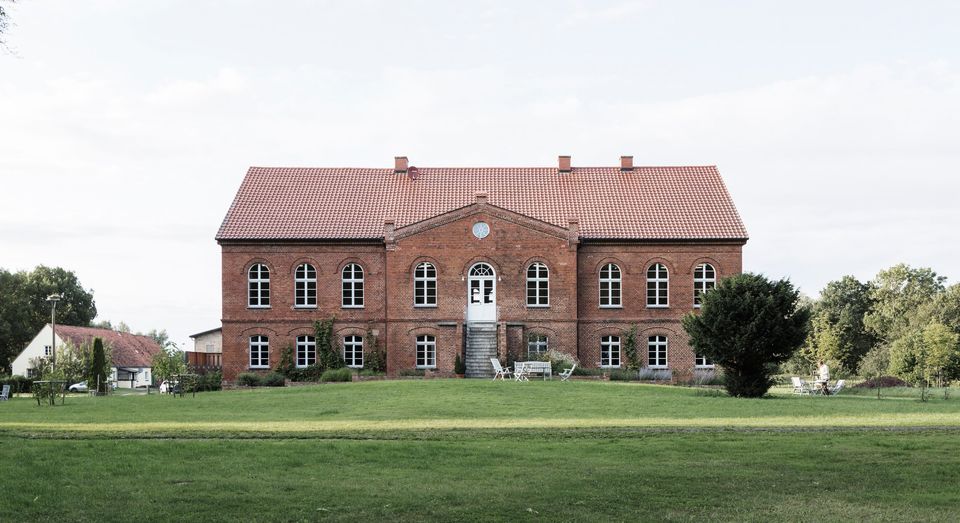 The salt marshes of Western Pomerania draw thousands of cranes in the spring and autumn, taking a break to refuel on their long migrations between Scandinavia and southern Europe. They also drew the art historian Bettina Klein, who converted the abandoned country residence of a noble family into a hotel and museum, set in 11.5 acres of parkland.

She collects contemporary art and runs an artist-in-residence programme in the hotel, around 2.5 hours north of Berlin by car. The top floor is devoted to works by former residents including Alex Schweder, Emma Waltraud Howes, Naoko Tanaka, and Riccardo Giacconi. The accompanying documentary work is displayed in the hotel rooms. This year’s artist-in-residence is Mieko Suzuki, a Japanese DJ, sound artist and curator based in Berlin. The park plays hosts to outdoor installations; a café promises homemade cakes.

In addition to hotel rooms, the Kranich Museum offers apartments to let. 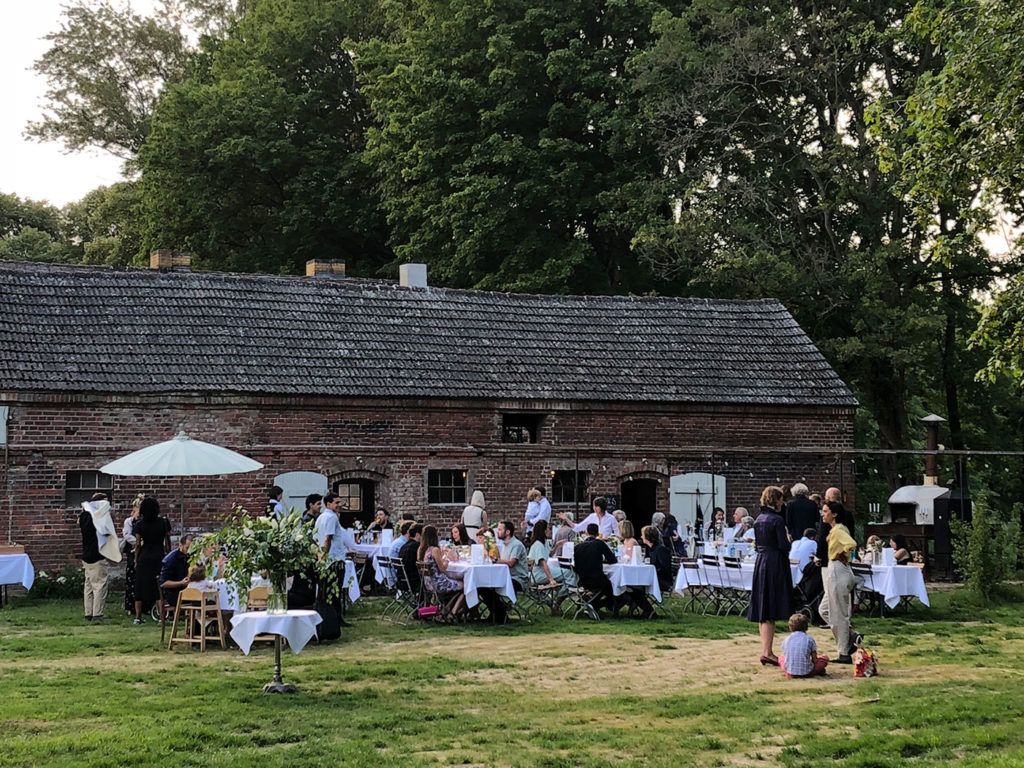 There is a public tour of the sculpture park every Saturday at 2pm. Schlossgut Schwante also offers activities such as an open-air cinema, dance evenings, lectures, concerts and yoga. 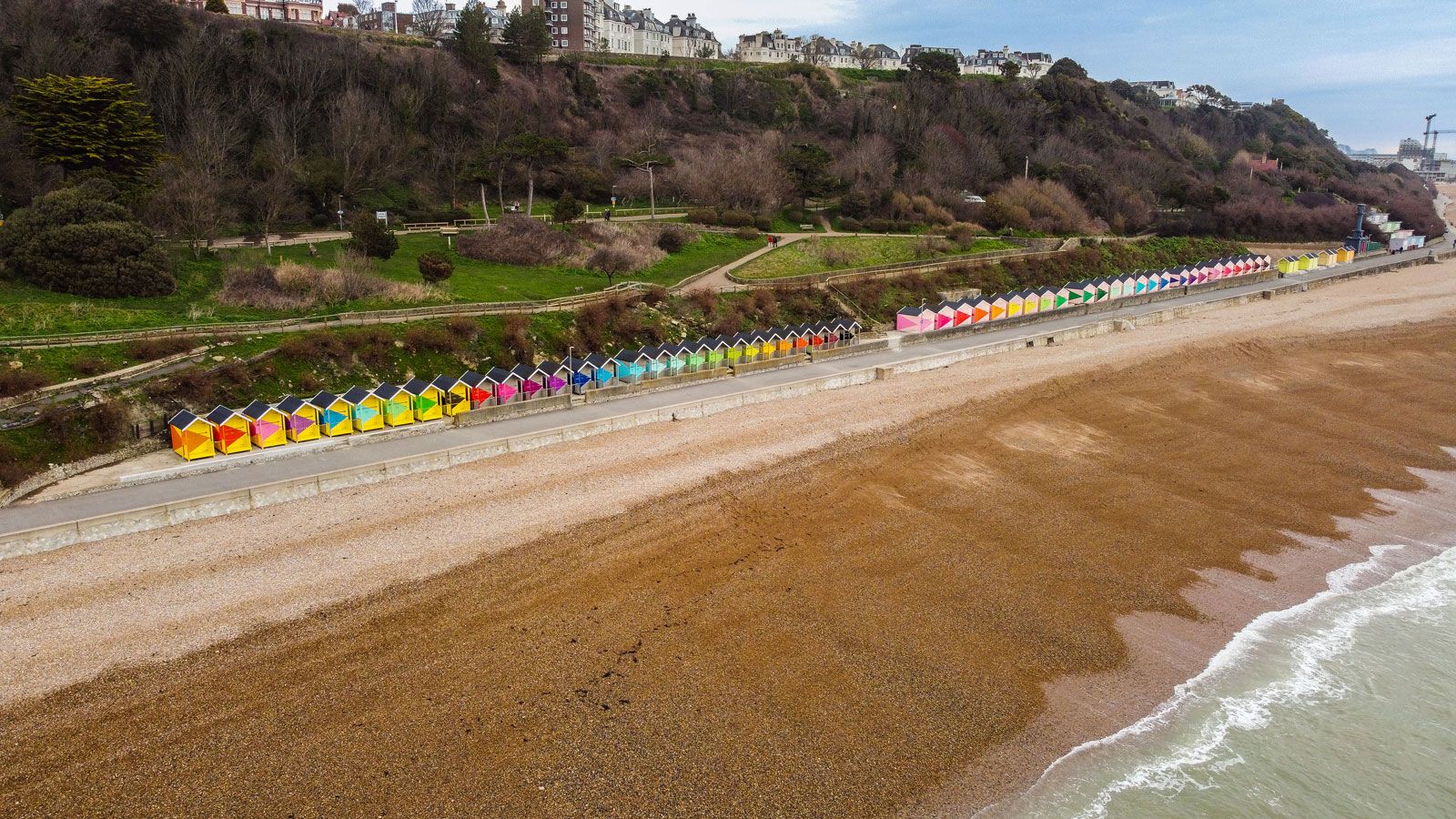 “Folkestone is an art school”, declares a mural at Folkestone Central train station, in southeast England. The work by Bob and Roberta Smith is a remnant of the 2017 Folkestone Triennial but should perhaps more accurately read “Folkestone is a sculpture park”, as this year’s triennial brings more than 20 new commissions to join the 74 now permanent works installed around the seaside town. The Turner-winning collective Assemble are a late addition to the roster of artists, after the triennial was postponed, and they have been working closely with the town’s skaters to created “skateable” street sculptures, according to the triennial curator Lewis Biggs. Rana Begum has already transformed a row of beach huts with colourful geometric shapes—“local people really love it,” Biggs says—, while Jacqueline Donachie is building a giant dance floor to celebrate the night-time culture of the town. The team did momentarily lose the venue for the triennial’s only indoor work, a virtual reality (VR) piece about marine ecosystems by Shezad Dawood, as it became a Covid-19 testing centre—but this has now been returned to the triennial. Dotted around the town will be billboards and banners by Gilbert & George, while up on the clifftop to the east of Folkestone is Pilar Quintero’s giant head of the two-faced Roman god Janus. The latter is a co-commission with England’s Creative Coast (below) and looks both inland and across the English Channel to France—but is it warding off invaders or welcoming visitors to the once touristy seaside town? 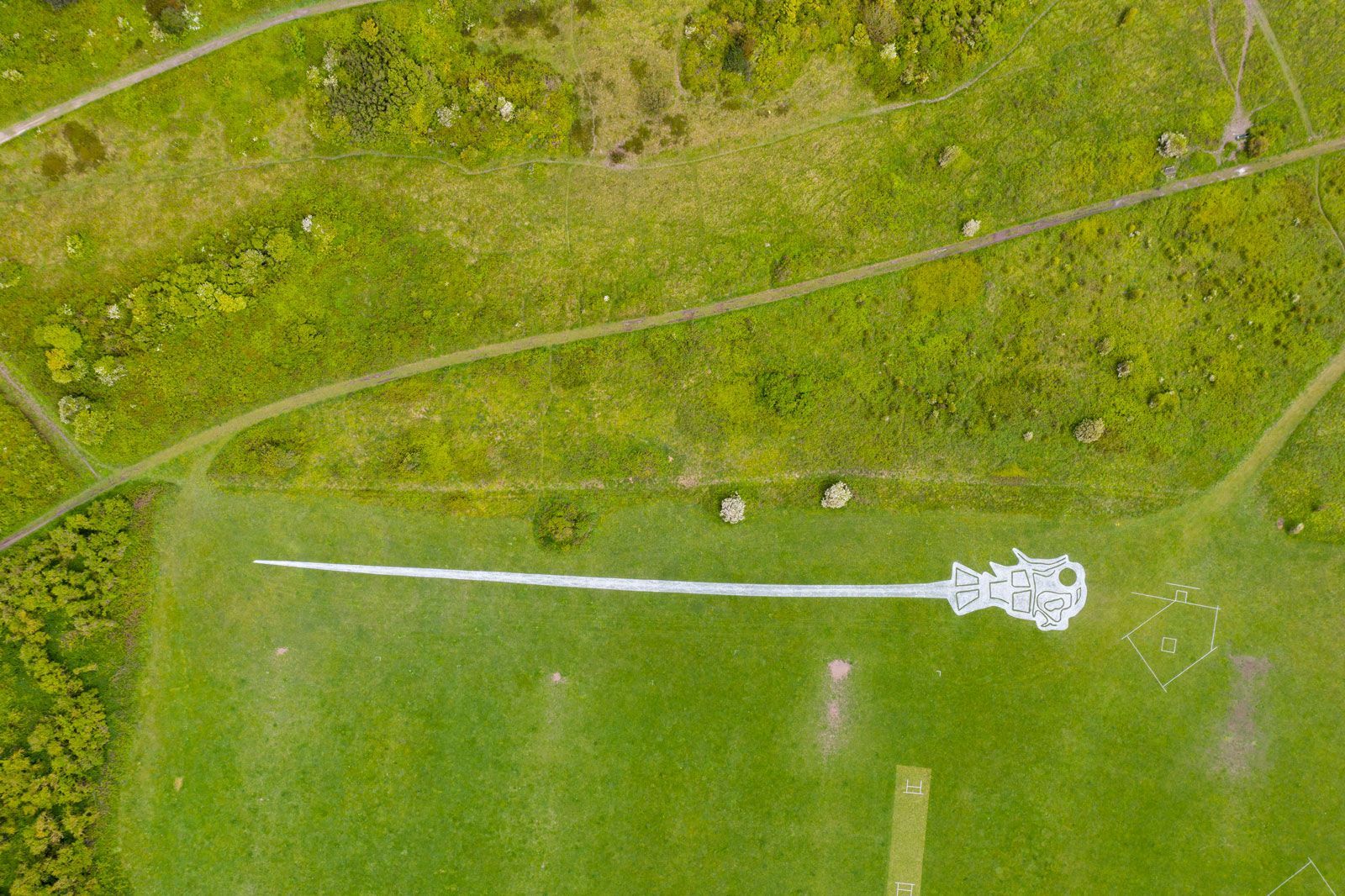 Seven sculptures have popped up all along the coast of southeast England, from Essex to East Sussex, via the Kentish coast. The Waterfronts commissions, curated by Tamsin Dillion in collaboration with local art organisations, include works by Katrina Palmer in Shoeburyness, Jasleen Kaur in Gravesend, Michael Rakowitz in Margate, Pilar Quinteros in Folkestone (above), Andreas Angelidakis in Hastings, Holly Hendry in Bexhill-on-Sea, and Mariana Castillo Deball in Eastbourne. One of the highlights is Hendry’s Invertebrate worm-like sculpture, inspired by a local brickworks, which seems to have weaved its way into the De La Warr Pavilion and deposited an exhibition of the artist’s work (until 30 August). Meanwhile, in Eastbourne, Castillo Deball has created a giant chalk geoglyph drawing just outside the town, which is linked—via a rope trail painted on the town’s streets—to Towner Eastbourne where she has curated a fun show of Sussex landscapes from the institution’s collection. With each visit you can (on the whole) combine a visit to an outdoor commission, a local art organisation who collaborated on the commission, and round it off with some refreshing sea (or Thames estuary) air and a dip—if you are brave enough. 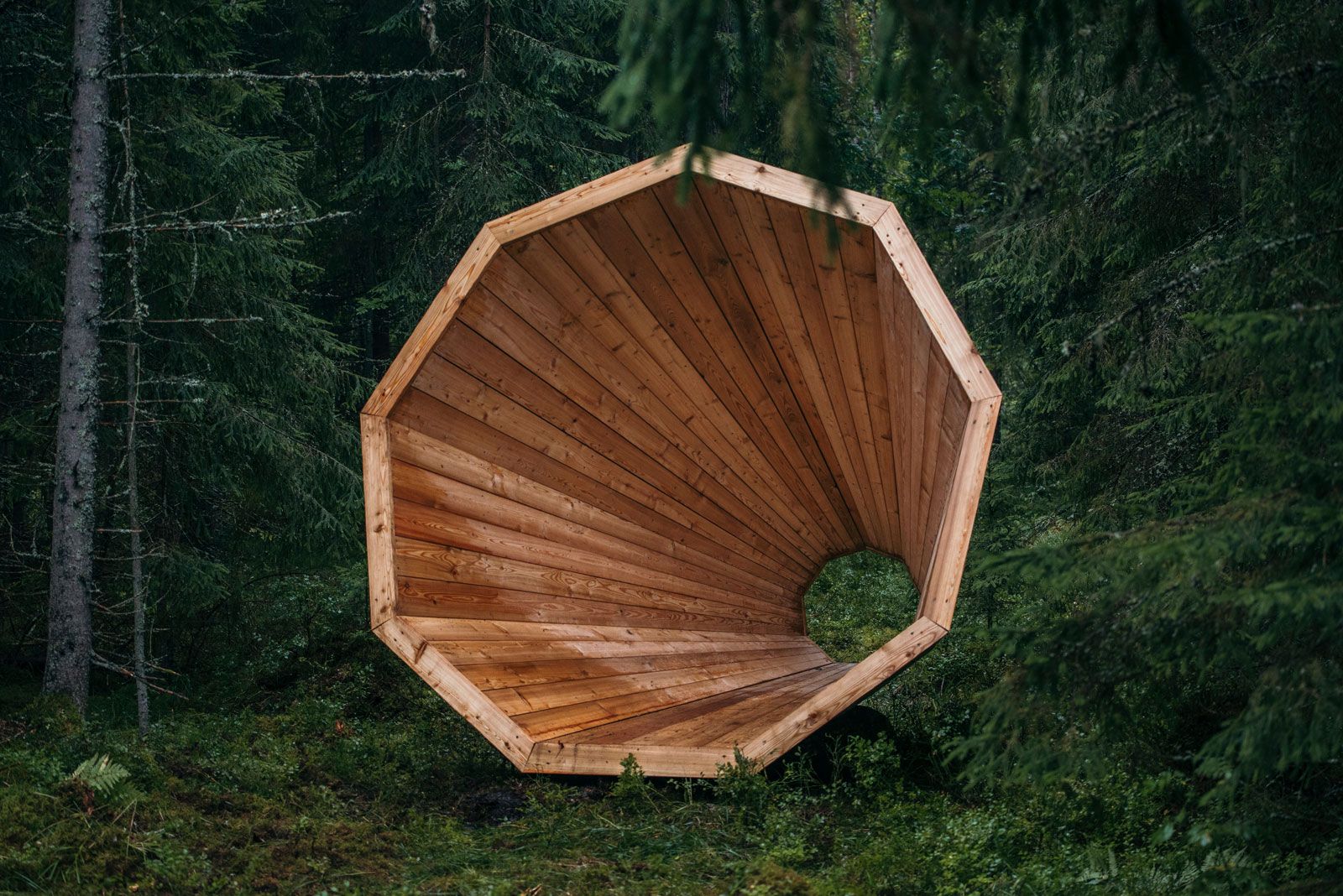 An outpost of the more famous Kew Gardens, Wakehurst’s botanical gardens and huge grounds in the West Sussex countryside will come alive this summer with all sorts of weird and wonderful sounds for its latest outdoor exhibition. Six site-specific sound installations will be placed across the 500 acres, from robot woodpeckers by the Berlin-based artist Marco Barotti, which are activated by signals from your mobile phone, to giant wooden megaphones by the Estonian artist Birgit Õigus. The latter, measuring 3m in diameter, will amplify the natural sounds that occur in the Coates Wood area of the grounds, which consists of trees from the southern hemisphere such as eucalyptus, Wollemi pine and southern beech. Other works will include a composition played among the giant Redwood trees by Hidden Orchestra; kinetic and sound sculptures by Kathy Hinde in the wetland areas; and handmade instruments hanging among the trees that will be “played” by the wind. 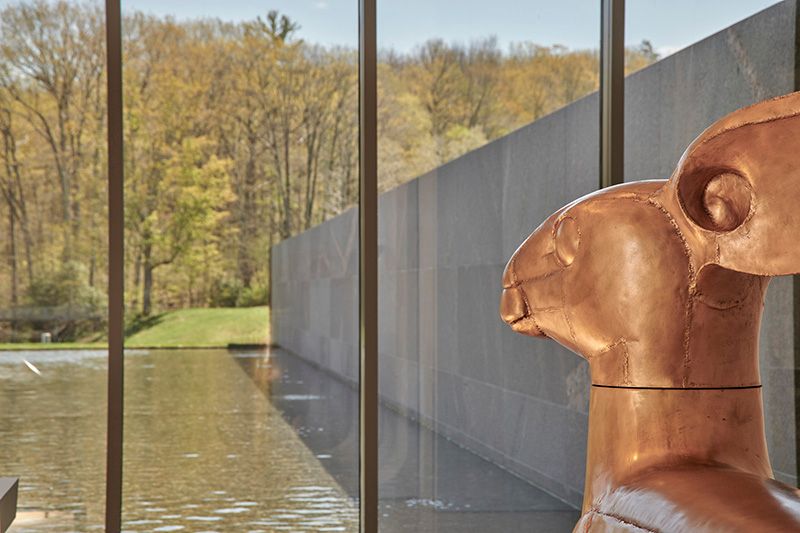 An indoor and outdoor exhibition devoted to the late French artists Claude and François-Xavier Lalanne, known collectively “Les Lalannes”, celebrates their dreamlike, nature-infused designs and sculptures, from their cutesy sheep ottomans to a bronze severed head encased in foliage. It marks the first US show dedicated to the artists in more than four decades, and their first institutional exhibition since the death of Claude Lalanne in 2019. On a hillside adjacent to the museum, visitors can see some grazing cows and the outdoor exhibition Ground/Work. The plein air show was unveiled last year amid the pandemic and features several enigmatic sculptures by artists like Eva Lewitt, Kelly Akashi and Nairy Baghramian. A sweeping retrospective dedicated to the American sculptor Bruce Beasley engulfs the picturesque 42-acre campus of the Grounds for Sculpture museum and arboretum with more than 60 sculptures, including eight that are installed outdoors. Beasley, who rose to prominence in the 1960s and became the youngest artist to have a work acquired by the Museum of Modern Art (in 1961, aged 21), once said that nature is the “ideal guide and great source; without it there is no warmth, no heart, and I insist that my work have both”. Beasley’s work has qualities that evoke the elements; pieces like Dorion (1986)—which gracefully hovers above a reflection pool—recalls a giant insect, while others resemble bursts of crystals. Sarah Sze’s new site-specific sculpture Fallen Sky (2021) is the first permanent work to enter the Storm King Art Center’s collection in more than a decade. The 36 ft-round, mirror-polished stainless steel work reflects the centre’s mountainous vista and is nestled on a hillside near the museum, where Sze’s coinciding exhibition Fifth Season immerses visitors in an abstracted landscape made from mirrored and organic surfaces. The art centre is also showing Rashid Johnson’s The Crisis (2019)—a 16 ft-tall pyramidal steel structure containing plants potted in various ceramic vessels. The plants will grow throughout the summer and spill out from the geometric grid, creating an environment reclaimed by nature that invites many interpretations. The parlor features a sofa and coffee table by Gerald Luss and Cecily Brown’s Reasons to Be Cheerful (2020-2021) above the fireplace Photo: Michael Biondo

The boutique selling exhibition, an enterprise of the former Frieze artistic director Abby Bangser in collaboration with other galleries and artists, aims to transcend the typical demarcations between art, design and architecture. The show is hosted in an enviable Modernist home devised by the architect Gerald Luss, best-known as the designer of the Time-Life Building in Manhattan, as his family home in the mid-1950s. The cantilevered house has been emptied of the current owner’s belongings and flooded with tastefully curated works that aim to be in “dialogue with the house, and with one another”, Bangser says. Among the highlights is a sun-drenched parlor featuring a painting by Cecily Brown and a glass sculpture by the artist Daniel Steegmann Mangrané with a base that replicates a design by the Brazilian architect Linda Bo Bardi.