A panoply of plastic poses: on Emma Hamilton

A new book explores her extraordinary personal and social transformations 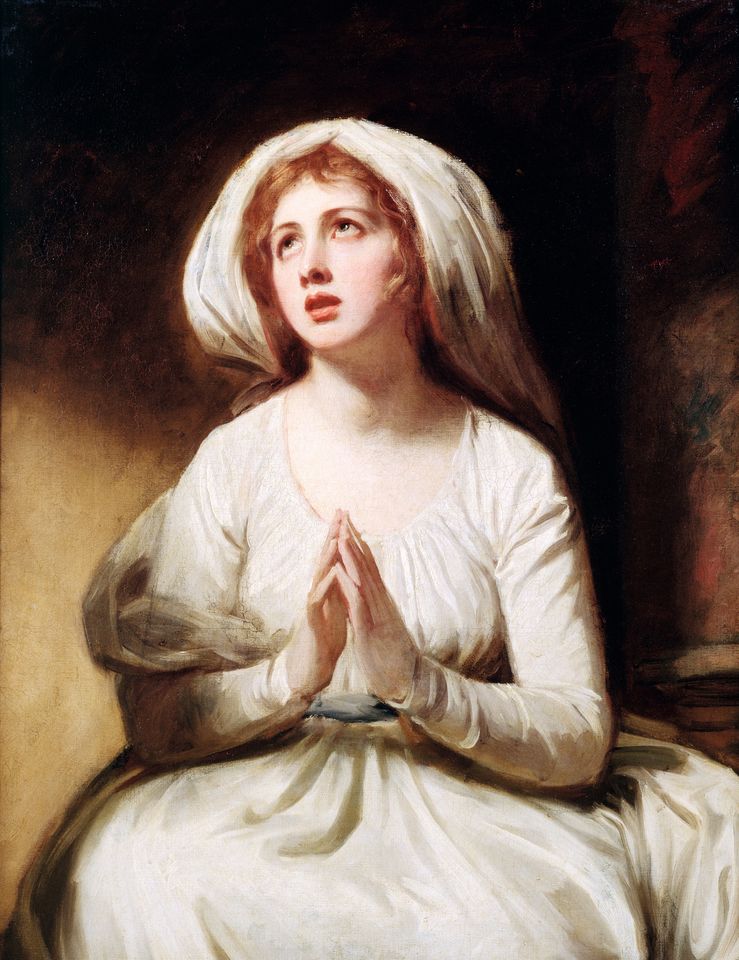 George Romney, the English painter, and Emma Hart (later Hamilton), both from humble backgrounds in the north-west of England, helped one another to fame with numerous portraits in the widest possible variety of roles. Emma At Prayer (around 1786-87) depicts a woman hardly celebrated for her piety, but who nevertheless conveys the vulnerability of a young woman forever at the mercy of those who are older and richer

No life perhaps better exemplifies the potential for an attractive woman in the 18th century, but also the perils sure to stalk her, than that of Emma Hamilton (1765-1815). In her successive incarnations as Amy Lyon, Emma Hart, Lady Hamilton and, finally, mother to Admiral Nelson’s daughter Horatia, she embodied social mobility of the most rapid upward sort, but the downward curve that followed was no less steep and spectacular.

The daughter of a Cheshire blacksmith, Amy or Emy soon found herself in London, where her poverty, far from occluding her beauty, only set it off. That apparent incongruity (crucial, for example, to Manon Lescaut’s allure) and the surprise, delight and, of course, sexual opportunism which it then authorised, seems to have been a recurrent feature in 18th-century relations. Such circumstances allowed a nobleman in pursuit of the vulnerable woman to flatter himself that he was “discovering” her by and for himself.

Discovered and then discarded by one Sir Harry Fetherstonhaugh, not before she gave birth to a daughter, she was passed on to one of his friends, Charles Greville. He refashioned her as Emma Hart, perhaps an allusion, venture the authors, to the town of Harting near which he lived, although surely the transformation from Lyon to Hart, hunter to hunted, will have invited a symbolic interpretation or two. Emma now entered her first phase of fame, as the muse of George Romney to whom Greville introduced her. Reynolds, Lawrence, Hoppner and Angelica Kauffmann would, in turn, be enchanted by her beauty, but the portraits by Romney stand out because of their sheer number (Emma was to Romney as Mont Sainte-Victoire was to Cézanne, or Rembrandt to himself), their variety and their continued potency. Even as he fixed a momentary likeness of this beautiful woman, Romney was able also to suggest how something in her movements and her personality continued to elude him. That he too had come up (or down, in the more literal sense) from a humble background in the north-west of England may have helped to forge the understanding between artist and subject necessary for this sustained achievement.

In 1786, Emma went on “holiday” to Naples and, in a cruelly ingenious act of reverse nepotism, was passed onto Greville’s widower uncle, William Hamilton, connoisseur of vases and volcanoes. They married and Emma entered the second phase of her fame as the purveyor of “attitudes”. Goethe was among the many tourists and visitors treated to a display of these tableaux vivants. The volume features a series of Friedrich Rehberg’s drawings of her postures, although they may leave the reader feeling that, for the full effect, you had to be there.

As Emma gained gravitas as ambassadress and artist in her own right, she was also unfortunately putting on weight. It would not be long before the likes of James Gillray, the caricaturist, came calling. Besides, by now, she had, notoriously, become involved with Nelson. Her husband seems to have been complaisant, and the real problem was Mrs Nelson. The volume evokes an age when soldiers made excellent celebrities and so did their mistresses. These days, it seems military wives are more in the public eye.

The authors seem hesitant about just how much we should know about post-revolutionary political strife, and the struggles between republicans and Ferdinand IV loyalists in Naples, which form an unsettlingly cruel and violent backdrop to the tales of seduction and celebrity. Although there is a passing reference to the fate of William IV’s erstwhile mistress, Dorothea Jordan (1761-1816), a wider comparative frame might have been helpful. Emma’s sweep across the European stage brings to mind the fame and adversity with which Mme de Staël (1766-1817) had to live, and in particular her fictional creation Corinne, who, having known love and veneration as an artist performing in Italy, must adjust to privations and humiliation in Britain. And the privileges and travails recall those of another contemporary, Empress Josephine.

The ending of Emma’s life is, however, especially dismaying and more than usually sad. To escape her creditors, she fled to temporary accommodation in Calais, but there she died. “Emma was dead—an unhappy ending to the darkest chapter of her life,” we are told in an uncharacteristically banal phrase. But let us not overlook a reassuringly familiar epilogue, a testimony to the cycles of life, even in this most turbulent, revolutionary period: Emma’s second daughter, Horatia, subsequently gave birth to ten children, once she, just like her paternal grandmother, had become a vicar’s wife.

• John Leigh teaches 18th-century French literature at Fitzwilliam College, the University of Cambridge. His most recent book, Touché, on duelling in literature, was published by Harvard University Press in 2015