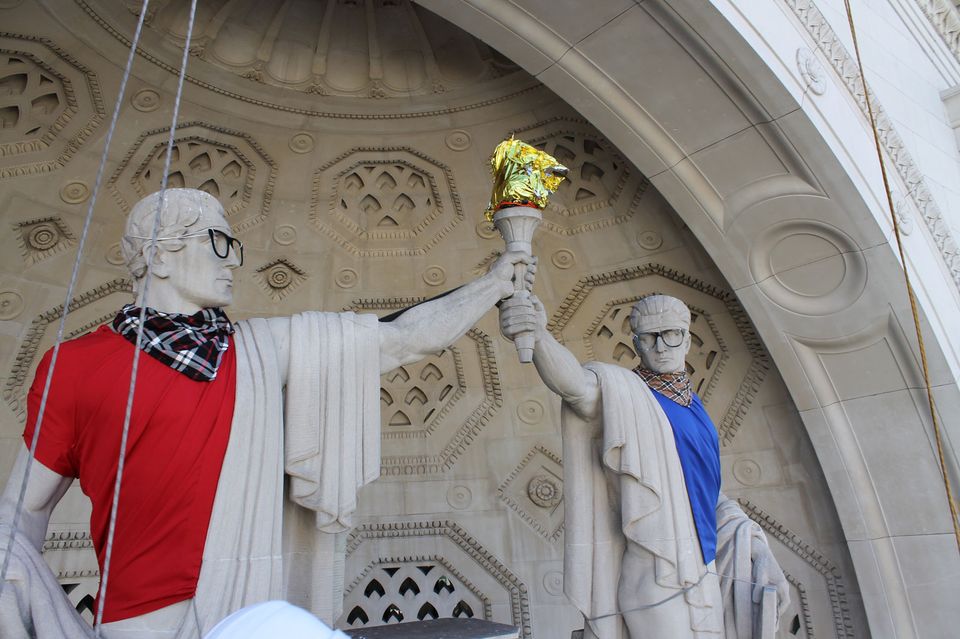 French artist Léo Caillard dresses classical statues as hipsters above the Aldwych entrance to Bush House in London. The installation forms part of The Classical Now exhibition at King's College London exploring the ways in which Graeco-Roman art has sparked the modern imagination Kings College London

A new exhibition at King’s College, London, pairing high-end classical antiquities and top contemporary works, draws on the collector Christian Levett’s private French museum and around 15 other lenders, including the British Museum, private galleries and artists.

From a rare first-century bronze head of Apollo, to Marc Quinn’s marble bust of Bill Waltier (Blind from Birth), and a gawdy, golden faux-classical Damien Hirst Medusa from his Venice show, The Classical Now (until 28 April) delivers an impressive and provocative contrast, exhibiting 20th- and 21st-century responses to the classical era alongside ancient sculpture and mosaic.

Some 20 works, around a third of the total, come from the Musée d’Art Classique de Mougins that Levett founded in France in 2013, while Quinn and Rachel Whiteread are among ten living artists who have lent works to the exhibition. The show inaugurates a new arcade space in Bush House, the former home of the BBC, with Sacha Sosno’s eye-catching 2008 bronze Le bon guetteur (the good watchman).

In the exhibition's second space, the Inigo Rooms in Somerset House’s East Wing, a charming Jean Cocteau pastel of a sphinx is one of several in which he refers to the mythical creature. Another highlight is the film Swinburne’s Pasiphae, a bawdy take on the Minotaur performed by the American artist Mary Reid Kelley, whose first UK solo show with her collaborator Patrick Kelley is now finishing at Tate Liverpool.

The Classical Now is part of a research project at King’s called Modern Classicisms. “The idea is to explore classical traditions through a Modern and contemporary lens,” says Michael Squire, a reader in classical art and one of the organisers of the show. “It is to challenge how we think the classical is. We think about the classical often as something set in stone, very clearly defined, something very distinct; and I think we wanted to make it something much more fluid, much more dynamic, much more open to interpretation. We wanted to rethink what the modern and contemporary is too.”

The display pairing of an ancient Greek amphora and an early vase by Grayson Perry, titled Classical Compromise, echoing its dark colours but decorated with ready-made transfers and studded bits of plastic and china, was typical. A 2013 wall mosaic by Christopolous Panayiotou reconfigures classically coloured stone into an abstract piece; a Roman Medusa mosaic hangs in another room.