In broad strokes, Velvet Buzzsaw slashes the art world, but without drawing much blood Professionally powerful and culturally connected, the art critic Morf Vandewalt (played by Jake Gyllenhaal) represents a different kind of lead for Dan Gilroy, the director of the art-horror film Velvet Buzzsaw, which premiered this week at the Sundance Film Festival and streams on Netflix from 1 February. Gilroy’s previous two features as writer-director centered on isolated, socially inelegant protagonists: the vicious, self-employed schemer (also Gyllenhaal) of Nightcrawler (2014) and the bookish, past-his-prime defense attorney (Denzel Washington) of Roman J. Israel, Esq (2017). Velvet Buzzsaw not only pushes Gilroy closer to the realm of ensemble productions, but also marries his satirical bent—previously exercised in Nightcrawler’s jabs at the sensationalist impulses of local television news coverage—to the body count-minded structure of a slasher movie.

During one of Velvet Buzzsaw’s early sequences, set at Art Basel Miami Beach, Morf negotiates an assortment of personal interactions as he goes about his professional duty of observing the exhibition. His conversation partners include Rhodora Haze (Rene Russo), a formidable Los Angeles gallerist whose long-ago punk-rock band name supplies the movie’s title; Josephina (Zawe Ashton), an associate of Rhodora’s who arrives at the fair after a Starbucks run, in tears from relationship trouble; and Gretchen (Toni Collette), a museum employee who will later make a money-minded move to the private sector. Many of these folks approach Morf of their own volition, jockeying for a well-placed word before he produces his coverage; others Morf seeks out himself. The mayhem kicks in with Josephina’s discovery of a stash of paintings in the apartment of a reclusive deceased neighbour, a man named Dease. She and her cohorts consider the works to be brilliant—and perhaps all the more valuable because of Dease’s complete anonymity. Rhodora and Josephina set about archiving the work; Morf pursues a book deal and pens a catalogue for the intended exhibition opening. But soon the people most intimately involved in publicising and profiting from the Dease endeavor begin dying under bizarre circumstances; alone in a gallery at night, or at a dingy outpost on the side of the highway, the status-obsessed denizens of Velvet Buzzsaw meet their maker.

After establishing this one-after-the-other structure, Gilroy strains to maintain an element of surprise. Part of the problem is that Gilroy, while indulging in predictably broad art-world satire (like a robotic piece at Art Basel called Hoboman), fails to produce characters that equal the ridiculousness of his critiques. Morf, Rhodora, Josephina, Gretchen and the rest are amusing in their way, and certainly ethically compromised, but there’s nothing so out-of-bounds about them that you would crave for them to be eliminated in increasingly baroque manners. Their personalities are mostly everyday-lukewarm, and Gilroy’s set pieces are not so ingenious as to make it a riot to watch boring people you barely know get annihilated. 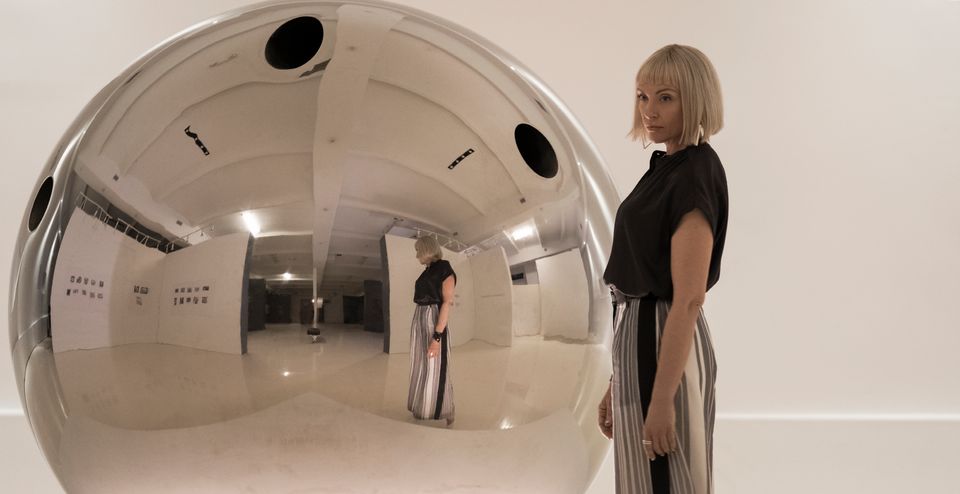 Toni Collette plays Gretchen, a museum employee who will later make a money-minded move to the private sector, in Velvet Buzzsaw Claudette Barius/Netflix

But Gilroy can be excellent at shading characters, and this comes to the fore on occasion. Morf, for starters, is a strange creation who seems a little different each time we see him. He has dalliances with both sexes; in one scene, Morf sits naked with his laptop while his male companion, also nude, prepares for a swim. Morf pines as well for Josephina, telling her at one point, “I feel good with you”—a nicely straightforward declaration of feeling from a guy whose sentences are often circuitous. Gyllenhaal is constantly outlining something new about Morf, and it is actually in the non-art-specific detours—a home where he gives unasked-for interior-decorating tips; a funeral where he derides the “cheesy organ music”—where we can most sense the observational facilities that might make Morf an incisive writer.

Among the rest of Gilroy’s cast, Piers (John Malkovich), one of Rhodora’s artists, is a fascinatingly glum standout—a recovering alcoholic who has not produced anything in years. One scene set in Piers’s studio crystallises both the good and the bad of Gilroy’s movie. Piers’s visitor mistakes a pile of garbage bags on the floor for a genuine work of art—a pretty facile, easy-target satire. (To Gilroy’s credit, he takes this same gag to a far more deranged extent in another sequence.) But barely a beat later, Gilroy reveals that Piers also keeps a basketball hoop in his studio. It is a lovely little detail, recalling the basket that Nick Nolte’s down-in-the-dumps artist also keeps in his workplace, in Martin Scorsese's Life Lessons (1989). The simple image of Piers shooting hoops on a sunny afternoon—a peaceful habit clearly designed to stave off personal demons—feels like no less a baring of his soul than his paintings. At once whimsical and dead-serious, the moment achieves a tonal balancing act that the rest of Velvet Buzzsaw struggles to replicate.