John Akomfrah digs into history’s darkness at the New Museum 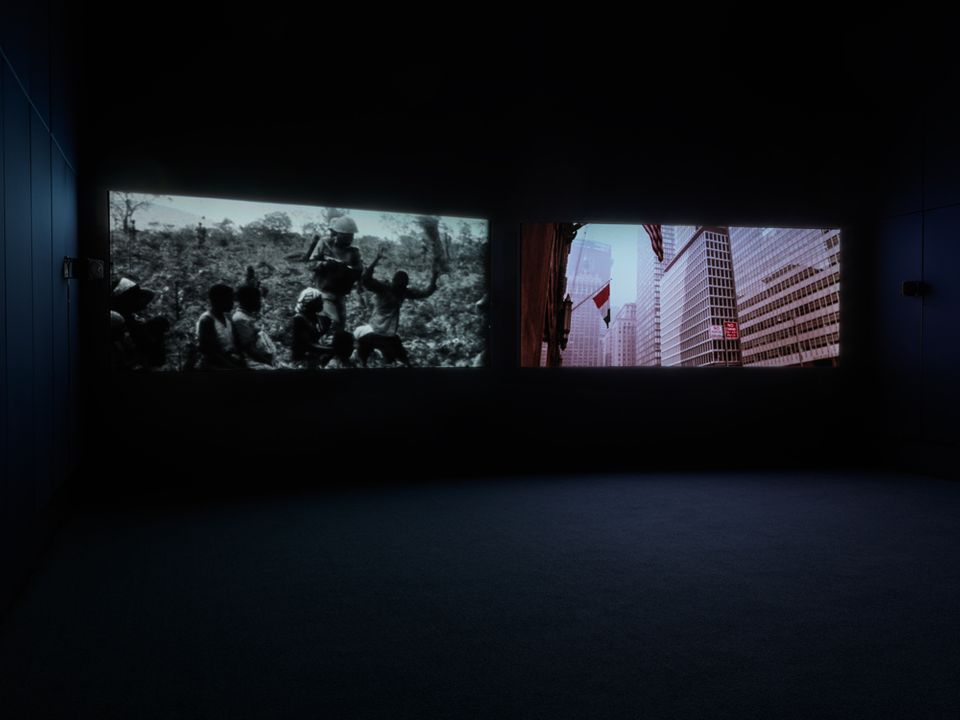 In the unnerving, carnivalesque 2015 Venice Biennale, an exhibition full of terrific violence, some artists contributed disproportionately to the widespread sense of fear. In one gallery, a man in a film by Christian Boltanski sat on a dirty floor with a hood over his head, vomiting blood and convulsing. Nearby, Adrian Piper scrawled her explicit threat onto an imposing black chalkboard: “Everything will be taken away.”

A short walk away was the world premiere of the British artist John Akomfrah’s film essay Vertigo Sea (2015), a 48min dirge, mostly collaged from found footage and projected onto three separate screens, lamenting the horrific costs of conquest. It is a damning picture of humanity: in long sections of the film, polar bears are hunted and broken. Whales are cut apart by men with enormous knives. Slaves are thrown off ships by traders looking to make insurance claims. In some of the most harrowing documentary shots, fishermen destroy an animal that pitifully spits blood back into the water. 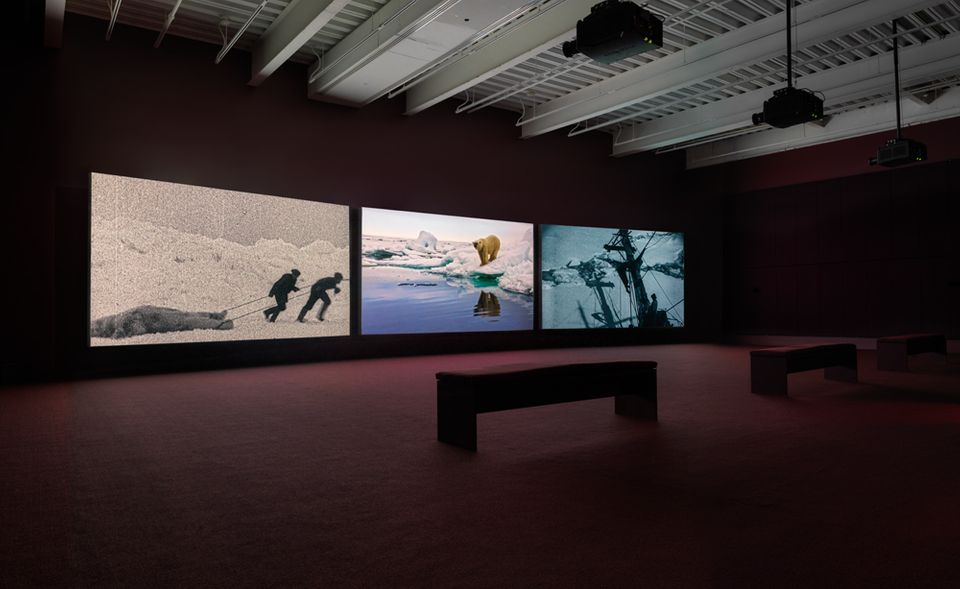 Vertigo Sea is now at the centre of Akomfrah’s first US museum survey at the New Museum, Signs of Empire (2 September), a show that further encourages the impression that he is one of the most forceful and stirring artists of the day—and one of our best social archaeologists. To make his great works, he digs through the past and almost always finds something we have not seen before, at least not properly. In his hands, the historical record reflects a brutal reality. But not only that: it also comes into our experiences like a mirage, as a panoply of pictures, sounds, and vague memories that can be re-edited into new stories with perhaps new futures.

Or, as the Jamaican-born, English-trained theorist Stuart Hall once put it: “Another history is always possible.” Hall, who was born in 1932 and died in 2014, is the subject of The Unfinished Conversation (2012), one of Akomfrah’s most confident works. Across three screens, we get snapshots from the philosopher’s life and times: newsreels of student marches, British slums and bombs falling from the sky, a jazz band beating away, a once-proud seaport, battles in the streets, a lone figure in a tundra, a black woman crying...

As these shots bounce around, here’s Hall in his 20s, breathlessly explaining how he edits the New Left Review and why Britain should disarm its nuclear weapons and make itself an example to the world. Later, he fervently lists the many inexcusable violences of empire, and suddenly on another screen, here is Anthony Eden, the former British Prime Minister, justifying on a news programme the country’s disastrous and frivolous invasion of Egypt in 1956 to further the Suez Crisis.

The record is here, plain for all to see. But Akomfrah never spells anything out in his art films. Much of the pleasure and surprise of his work comes from how he complicates chronology. Instead of neat summaries, we get bursts and excerpts, echoes from the past, glimpses of fear and trembling next to radical potential, and then your memories re-cut everything into your own edited sense of history and possibility. These are the building blocks of Akomfrah’s work.

But what if things had been different? This question haunts the exhibition. In Transfigured Night (2013), a two-channel meditation on transatlantic republics, we see Félix Houphouët-Boigny, the first president of the Ivory Coast, make a state visit to John F. Kennedy in Washington, DC. At one point, the two take a trip to the Lincoln Memorial, and briefly, in a flicker, here is a young, liberal American president with his counterpart from a newly independent African republic, together at the feet of the greatest and most radical political leader we have ever known. As the picture dissolves, it leaves an afterimage of faded potential.

Transfigured Night is one of Akomfrah’s weaker films, ostensibly for reasons of shape and colour: sometimes, the palettes across the two screens just clash. This happens mostly when documentary footage appears alongside shots Akomfrah took more recently himself. It is impossible to dampen the blinding glare of contemporary pictures, especially alongside the muted tones of archival reels. Inevitably, another question comes up: how can anything Akomfrah devises be as raw or powerful as the images he finds? At several points in Vertigo Sea, characters appear dressed in 18th-century garb and it can feel somehow inadequate to the problem at hand. 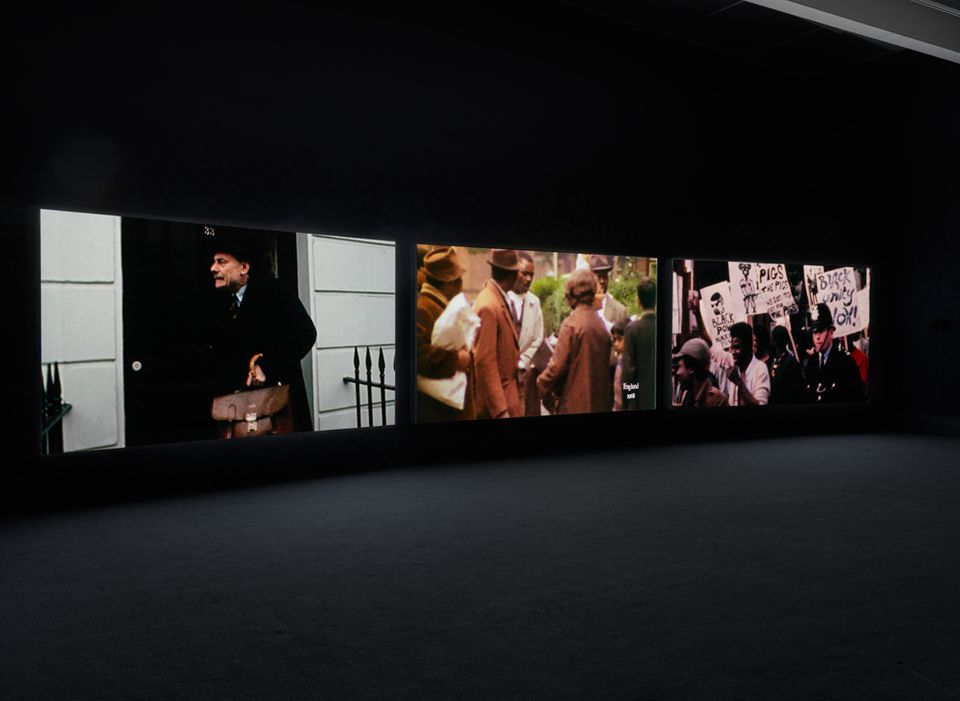 Akomfrah was born in 1957 in Accra, Ghana, but moved with his family to London when he was four years old. In 1982, he was part of a group of seven that founded the Black Audio Film Collective as a collaborative practice in the UK. In 1988, Coco Fusco curated an exhibition at the Hallwalls Contemporary Art Center in Buffalo, New York that prominently featured their work. Before they disbanded in 1998, they created films like Seven Songs for Malcolm X, a multi-layered study released in 1993, the same year as Spike Lee’s theatrical biopic (the director is interviewed in the collective’s film). Meanwhile, Akomfrah continued to produce more conventional documentary films, including studies on the Civil Rights leader Martin Luther King, Jr (1997) and the jazz composer Louis Armstrong (1999), both for the BBC.

In the New Museum’s excellent exhibition catalogue, Diana Nawi notes that unlike Transfigured Night, the Martin Luther King film “ends on a hopeful and even triumphant note”. Yet even in Akomfrah’s darkest work, there is always a clear sense of purpose. The earliest piece in the show, Expeditions One: Signs of Empire, made by the Black Audio Film Collective in 1983, begins with an ominous title sequence with a silhouette of Justice, sword in one hand, but her scale nowhere to be seen. The next picture warns that what follows is “an investigation into colonial fantasy”. 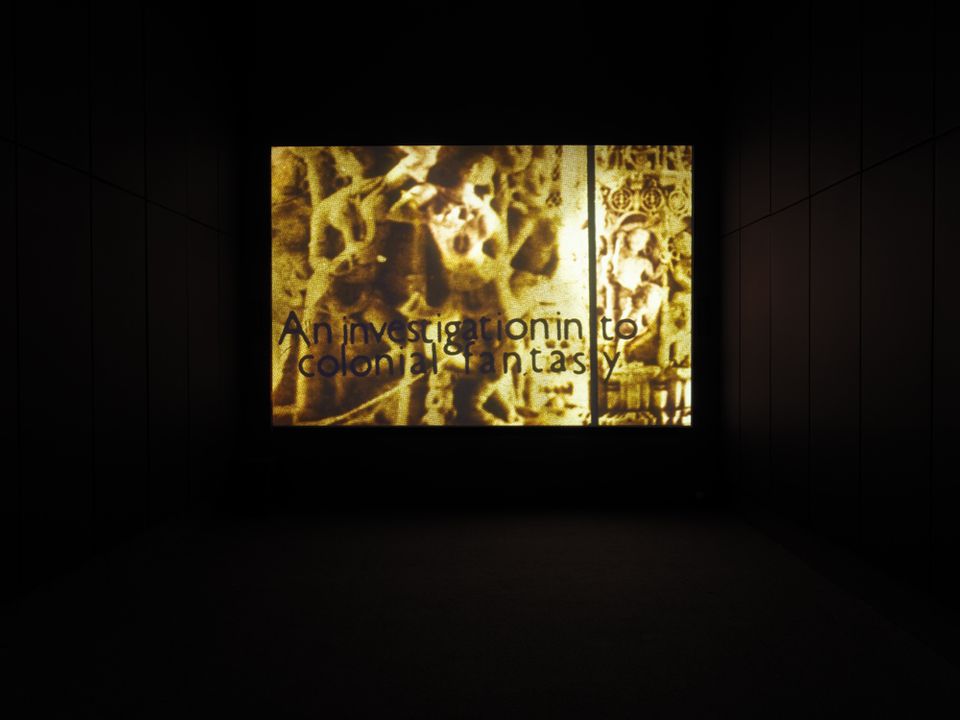 Dissonant music builds throughout, and studiously, over 26 minutes, we dive into the twisted horrors of European conquest. The pictures and sounds are alarming, but they also offer a novel way into the past. Akomfrah is not simply re-telling a story; he has a grander ambition than that. He’s chasing Walter Benjamin’s dream: not only to truly, honestly see history, but “to take control of a memory as it flashes in a moment of danger”.

For an interview with the artist about his exhibition, listen to our podcast.