Group show at Korean Cultural Centre UK combines photography, installations and archival material to explore one of the world's most heavily militarised zones 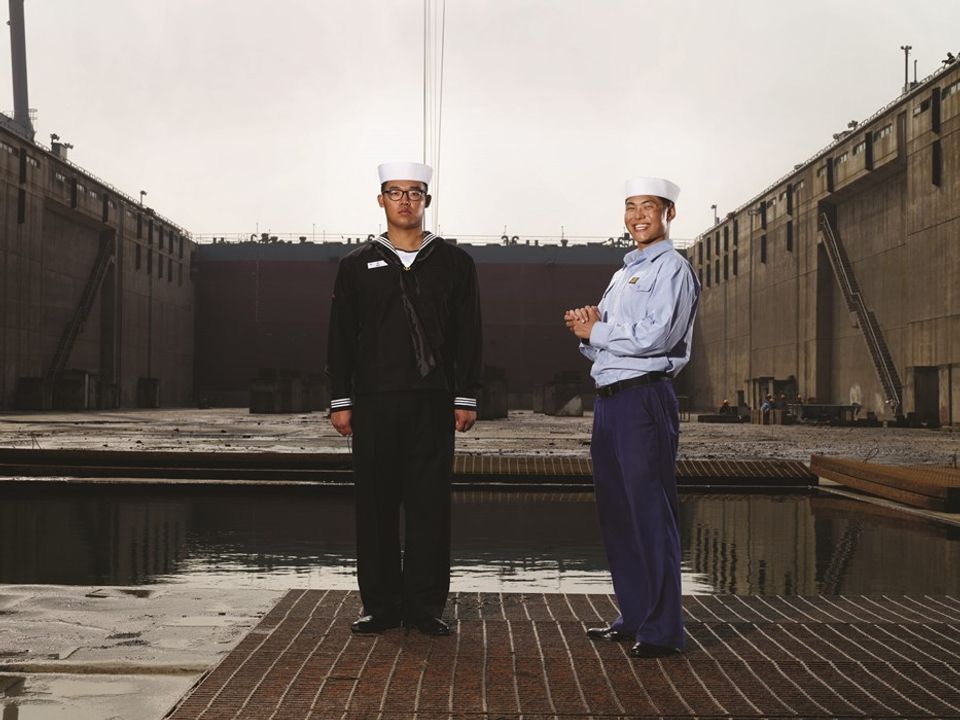 Heinkuhn Oh, A laughing sergeant and a private E-2 at attention, (October 2010, 2010) Courtesy the artist

In August 2015, loudspeakers were set up by the South Korean government to blast K-pop across the country’s northern border at the grim-faced sentries opposite. North Korea quickly retaliated with an artillery barrage across the border. “This reckless provocative mania should never go unpunished,” commented a spokesman for the North.

Things have come a long way in the past few years. But it is this mix of the absurd and the tragic that still characterises relations at the boundary between the two Koreas, as is captured in the unexpectedly funny but also moving exhibition, Negotiating Borders, running at the Korean Cultural Centre UK (KCCUK) in London until 23 November.

The exhibition is an artistic response to the demilitarised zone (DMZ), the 4km-wide, 250km-long, strip of land that separates North and South Korea. It remains, in spite of its name, one of the most heavily militarised areas in the world.

This exploration of the Korean peninsula’s political and cultural borderland is the work of the Real DMZ Project, an ongoing contemporary art project founded in 2012 by the curator Sunjung Kim. The London iteration is based on a show held last March at the old Seoul railway station, where in pre-war times travellers boarded trains for the far north of the country.

Housed in the compact space of the KCCUK, just off the Strand, this dense show manages to fit within it: photographs of the zone in the 1960 taken by Hanyong Kim for the Korean army; Jung Heun Kim’s onomatopoeia-spattered painting of the two flags flying above the DMZ, A Strange Scene (1999); Mountain Ori (2016) by Soyoung Chung, a work that uses thick black lumps of beeswax to evoke the lost geology of North Korea; Minouk Lim’s multi-faceted installation, Monument 300—Chasing Watermarks (2019), which reimagines the slaughter of anti-communist prisoners by the retreating North Korean forces; A botany of the zone’s flora, minus the roots which have been made inaccessible by the 2.2 bn landmines planted alongside. On it goes.

The presentation is arresting. What appear to be heaps of dead bodies covered in blankets fill the window that faces onto Northumberland Avenue, leaving the Centre seeming, despite its central location, devoid of human life. While this does offer a satisfying parallel with the DMZ itself, it is a shame, because this is the best show yet at the consistently interesting KCCUK.

The scene is set with a piece of archival material from a 1988 precursor show in New York, when the Korean-American conceptual artist Nam June Paik proposed turning the DMZ into a tiger reserve. In bright, multi-coloured crayon, the artist explains his explains his reasoning thus: “(1) To Attract Japanese Tourists; (2) To Keep Ecology Heaven; (3) To Eat Up Invaders.”

Another highlight is Noh Suntag’s photograph of mass North Korean gymnastics displays, Red House (2007). This deeply-affecting image captures the thousands of dark-eyed faces staring out from beneath the painted squares of cardboard from which the stadia-sized mosaics are constructed.

Meanwhile, the photographer, Hein-kuhn Oh, offers a different perspective on the military personnel on duty within the DMZ. His photographs of young men patrolling the hyper-militarised border reveal the conflicted perspectives of the conscripts, lending the border zone the feel of an elaborate charade.

Finally, some of the most interesting works on display are Kyungah Ham’s What You See is the Unseen (2015/16). These large images of chandeliers are smuggled into the North to be embroidered by seamstresses who are subject to strict censorship. The caption alongside one of the works reads: "North Korean hand embroidery, silk threads on cotton, middle man, smuggling, bribe, tension, anxiety, censorship, ideology, wooden frame, approx. 1,600 hrs/2 persons, 160x247cm."

Perhaps the censors of the North, and the regime itself, might find less in this show to object to than in being subject to bombardment by K-Pop. The great insight offered by this rewarding exhibition, that tragedy and farce are frequent companions, was—after all—first pointed out by Marx.