Of fossils, prisms and volcanoes: the scientific and imaginative investigations of the polymath Goethe 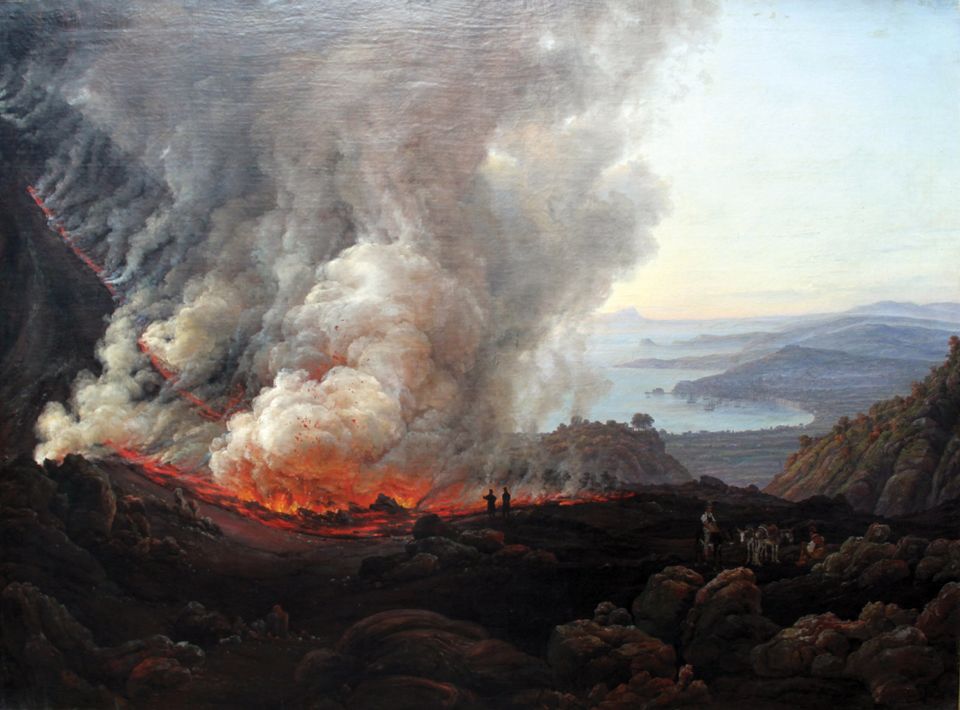 “The eye was the principal organ through which I grasped the world,” wrote Goethe in his autobiography. Goethe’s visual sense has been much discussed, notably by Pamela Currie in Goethe’s Visual World (2013), and his often brilliant art criticism has been made available by John Gage in Goethe on Art (1980). The massive volume under review, accompanying an exhibition at the Schiller Wohnhaus, Weimar (until 16 February), explores the relation between Goethe’s visual imagination and the fascination with natural science which preoccupied him from the 1780s till his death in 1832.

The range of Goethe’s scientific interests is astonishing. The catalogue contains some 40 short articles arranged in three broad sections: geology, mineralogy, and palaeontology; anatomy and botany; and optics and astronomy. Even this list is incomplete. Only the briefest mention is made of Goethe’s interest in cloud formations, which were not understood till Luke Howard’s Essay on the Modifications of Clouds (1803); Goethe corresponded with Howard and wrote a poem in his honour.

Goethe’s house in Weimar contains around 23,000 objects that show how keenly he followed scientific developments. There are fossils, mineral specimens, human and animal skulls, stuffed birds and animals, chemical apparatus, a microscope, and much else. Many of these objects are depicted here. As one of the book’s editors, Thomas Schmuck, emphasises, they form an invaluable record of a period of revolutionary scientific advance.

In The Doctrine of Colours, Goethe denied the existence of the prism and attacked Newton for “crucifying” light

Around 1800 it was being realised that nature itself had a history. Previously, the natural world had been regarded as a static system, unchanged at least since the Biblical Flood. Its order and balance reflected the equilibrium that Isaac Newton had demonstrated in the universe. Such an order is presupposed in the Systema Naturae (1735) by Linnaeus, one of the three authors (alongside Shakespeare and Spinoza) by whom Goethe claimed to have been most deeply influenced.

An insoluble problem for this worldview was the existence of fossil animals. Had they perished in the Flood, or in some other catastrophe? But if so, why would God in his wisdom create animals only to let them become extinct? Hence the discovery of mammoth bones made Thomas Jefferson think that mammoths must still exist in the unexplored extremities of North America. In 1796, however, Georges Cuvier demonstrated that the mammoth differed from either living species of elephant. It became accepted that the earth was far older than the 75,000 years which was the 18th century’s boldest estimate, and that the deep past included a succession of cataclysms.

Perhaps the most striking illustration on this book shows an artist’s vision of prehistory. Leander Russ’s Prehistoric Landscape (1842), never exhibited before, depicts a plesiosaur emerging from the sea and threatening some small winged dinosaurs, while a volcano erupts in the background. Some coloured illustrations provided for an 1847 geological history by Karl Joseph Kuwasseg show landscapes even before the emergence of animal life. Although these pictures were made after Goethe’s death, it was right to include them, not only because they are marvellous, but because they show how the new temporal expanses affected the 19th-century imagination.

Goethe, himself a talented artist, was inspired by his friendship with Alexander von Humboldt, the explorer of South America, to paint a delightful watercolour in which Humboldt, climbing Chimborazo, waves to another naturalist on the summit of Mont Blanc. Though fanciful, the scene shows Goethe’s careful attention to the types of vegetation at different levels.

Humboldt and Goethe differed over Vulcanism. Goethe adhered to the respectable but increasingly precarious “Neptunist” theory that the earth’s surface had been shaped by the gradual retreat of the primordial ocean. “Vulcanists” thought it had been formed by volcanic upheavals. The latter theory, which eventually won the day, was anathema to Goethe’s gradualist outlook; in Faust II he ascribes it to the devil Mephistopheles. His fears are made vivid by the reproduction (twice) of a dramatic oil painting by Johan Christian Dahl of 1826 showing Vesuvius in eruption, with a lava stream and huge clouds creating an infernal atmosphere.

Goethe’s temperamental rejection of Vulcanism illustrates his tendency to prefer theories on subjective grounds. The most notorious example is his obsessive opposition to the explanation of colours put forward in Newton’s Opticks. In The Doctrine of Colours (1810), Goethe’s longest book, he denied the existence of the prism and attacked Newton for “crucifying” light. Goethe really objected to the mathematical, quantifying approach to the physical world, which he thought denied the reality of immediate experience.

Here the authors treat Goethe very indulgently. They quote Werner Heisenberg’s claim that Goethean subjectivity is a necessary complement to scientific objectivity, and they assert that The Doctrine of Colours was important for Turner, Klee and Kandinsky. Turner certainly gave the title Light and Colour (Goethe’s Theory)—the Morning after the Deluge—Moses Writing the Book of Genesis (1843) to a painting dominated by a swirling yellow vortex, but, as John Gage has shown, his annotations to Goethe’s text are sceptical, while Kandinsky seems only to have benefited from Goethe’s casual speculations on the psychological effects of colours.

The authors can be forgiven for some special pleading on Goethe’s behalf. Their catalogue forms an exciting and absorbing introduction to the ferment that geology and the life sciences were undergoing in Goethe’s day.

• Ritchie Robertson is the Taylor Professor of German Language and Literature at the University of Oxford. His latest book, The Enlightenment, will be published by Penguin Books in November