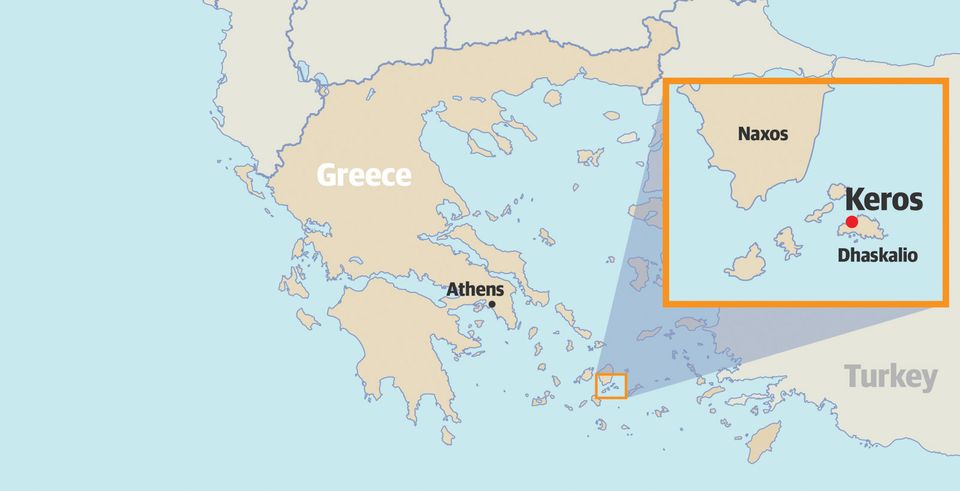 Keros is the largest of the “small Cyclades” group of islands between Naxos and Amorgos. Much rockier than the others, with little arable land, it now has no human occupants. It was the reported source of some of the first Early Cycladic (Early Bronze Age, 3300-2000BC) marble figurines to become widely known—a life-sized head (in the Louvre from 1873) and a harp player and double-flute player (in the National Archaeological Museum, Athens, from 1884).

The island attracted little attention until 1963, by which time material supposedly from Keros was beginning to appear on the art market. A likely source was identified in the Kavos area at the western end of the island, at a site where scattered fragments of Early Cycladic ceramics and marble items, including figurines, indicated an episode of major looting. Remains of a settlement of the same period were identified on the islet of Dhaskalio, just 90m offshore from Kavos. At that time, the Kavos material seemed likely to come from a cemetery, as did the majority of comparable Early Cycladic special works in marble, but excavation of the looted area and other investigations on Keros did not identify any graves likely to have produced such rich and abundant material.

The primary aims of the 2006-08 campaigns of the Cambridge Keros Project, directed by Colin Renfrew and Michael Boyd, were to investigate Dhaskalio and Kavos more thoroughly, and the bulk of the results of the extremely successful project are to be found in these four substantial volumes. The settlement at Dhaskalio (which has proved to be the largest on Keros) was found to have three phases of occupation, lasting from the most flourishing period of Early Cycladic culture into the following period of decline, still poorly known, about which it has provided a mass of invaluable new information. The site has many special features, including some impressive architecture that made much use of marble brought from Naxos (a formidable undertaking before the development of sail-driven ships). Although much of the material is of ordinary domestic type, it appears to be almost entirely imported, although there is widespread evidence for local metalworking (copper and lead). The discovery of two small gold items is a further indication of the site’s importance, since gold is barely known in Early Cycladic contexts otherwise. All the material is published in Vol. I except for the pottery, covered in detail in Vol. IV; Vol. I also contains the necessary introduction to Keros and the background of the project, and various geological and other scientific analyses.

Dhaskalio’s importance was surely connected to the activities in the Kavos area, although it outlasted the use of the “sanctuary”. The islet was in fact linked to Kavos by a land bridge in the Early Bronze Age. The discovery and excavation of a comparable but intact deposit 110m south of the looted area has proved crucial to the formulation of an explanation for these deposits, which is little short of revolutionary in its effect on our ideas of the Early Bronze Age in the Cyclades and the Aegean world generally.

The work in the Kavos area is presented mostly in Vol. II, which is especially concerned with what are now termed the Special Deposits North and South, but the final conclusions on the ritual nature of the deposits are presented in Vol. III, along with detailed study and analysis of all the Special Deposit South material. Vol. III contains other studies, most important of which is a discussion of the considerable evidence for metalworking at Dhaskalio and the smelting of copper ore on the “Kavos promontory” north of the area of the deposits.

Early Bronze Age schematic figures found on the islet of Dhaskalio, once linked to Kavos by a land bridge Courtesy Cambridge Keros Project

This area, a relatively flat zone above the beach incorporating a rock shelf, is not marked out specially and does not contain any substantial structures, but is termed the “sanctuary” as the place of ritual deposition. This was the final stage of a complex sequence of activities, in which parts of figurines, vessels and other items that had been broken or at least damaged elsewhere (apparently not on the island) were brought to Kavos by visitors from other Cycladic islands, adjacent parts of the Greek mainland and maybe Anatolia, and ceremonially placed on the ground or in small pits.

Certain types—stone (white marble) “folded- arm” figurines and bowls, and clay sauceboats and conical-necked jars—dominate, adding so many to those already known that they have changed our knowledge of these classes. In particular, the prominence of the folded-arm figurine underlines its ritual importance in Cycladic culture beyond the funerary sphere.

The potential involvement of many communities in this ritual over centuries leads Renfrew to the conclusion that there was a sort of “confederacy of Keros”, which would thus be one very tangible expression of the “international spirit” that he was the first to recognise as characteristic of the Early Bronze Age period when the Cyclades flourished. Overall, this interpretation seems plausible, although, as Renfrew has admitted, many problems remain, such as the noticeable differences between the two deposits, the nature and significance of the ritual, and how it might lead to the foundation and spread of a “confederacy”, and the possible link with post-funerary activity (a significant quantity of human remains was found in rock shelters in an area south of the Special Deposit South). But the editors and contributors deserve hearty congratulations for producing these thorough, authoritative volumes in such a short time—a truly major achievement. More volumes will follow and will be eagerly awaited.

• Oliver Dickinson taught in the Department of Classics and Ancient History at Durham University (1976-2005), retiring as Reader. He is author of The Origins of Mycenaean Civilisation (1977), The Aegean Bronze Age (1994) and The Aegean from Bronze Age to Iron Age (2006)