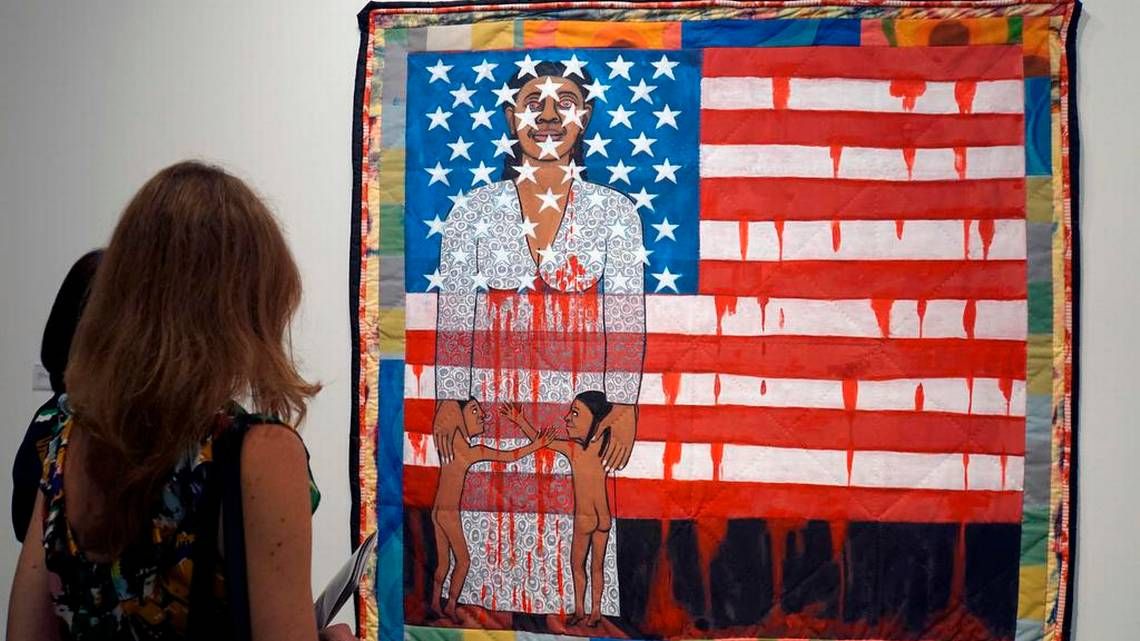 A fair-goer looks at the work of US artist Faith Ringgold, “The Flag is Bleeding 2” (1997), during a preview day of Art Basel in Miami Beach in 2019. Shutterstock

Voters across the US may be still rattled and exhausted after a tumultuous—and still undecided—presidential election. The art market, too, faces an uncertain future, regardless of who is installed in the Oval Office.

To look forward, we must first look back. With Trump’s substantial tax cuts for the rich early on in his tenure, wealth inequality in the US has reached new highs. That means, simply, investors and collectors have more capital while artists, cultural producers and small creative business owners or self-employed workers have far less. Data published by US Federal Reserve in October ahead of the election shows that the top 1% of Americans have a combined net worth of $34.2 trillion, or 30.4% of all household wealth in the US, while the bottom 50% of the population holds just $2.1 trillion combined.

It is an issue exacerbated by the coronavirus pandemic. While many middle- and upper-middle-class Americans have been able to work from home during lockdowns, those near the bottom of the economic ladder have been battered by Covid-19, which has killed more than 210,000 Americans, furthering financial inequalities. It has primed the US for a problematic "K-shaped" post-pandemic recovery—a phrase Joe Biden trod out often in his campaign—wherein the wealthy rebound quickly and lower-income demographics struggle to financially recover or even find themselves worse off before economic conditions improve. Indeed, America’s billionaires have grown significantly richer during the pandemic—Elon Musk’s wealth increased 242% in 2020, according to Forbes, while Jeff Bezos added $65bn to his bottom line.

The wealth gap has been on the rise for the better part of four decades, however, not just the last four years or even four months, and will likely continue if unchecked. What is unprecedented, however, is the low interest rates that have been kept at 0% for an unusually long time under Trump and will continue to be kept low by the US Federal Reserve for the foreseeable future due to the pandemic.

“This is something rich people have never really had to deal with before. Historically, what the wealthy have done with their money is invest it and live on the income,” says Axios' chief financial correspondent Felix Salmon, speaking on The Art Newspaper's The Week in Art podcast. “What happens in a world with 0% interest rates is that even if you have a $100, you're getting a zero income from it and so you need to start looking for other places to find your money and to invest your money.”

Investors, then, turn toward typically more illiquid assets that would not have paid interest anyway—like art. “What’s the difference between the government bond that pays 0% and a Rothko painting that pays 0%? They're both things that have some kind of value and they can go up in value over time or down in value over time,” Salmon explains. “And you're not going to be able to live off either of them, but at least the Rothko makes you feel cultured.”

The social scrutiny of the open marketplace in a country under economic duress and facing extreme civic distress has furthered the ongoing trend toward private sales in the art market. Over the last few years, we have grown accustomed to a critical mass of high-value art works guaranteed and selling on a single bid—at last week’s Sotheby’s back-to-back Impressionist and Modern and Contemporary sales in New York, 36% and 51% of each sale, respectively, was backed by guarantees and most works sold for around their low estimate. And as much as there is talk of increased transparency as sales are pushed online, the reality is much different as the production of such live-streamed events can hide any number of sins. This could have far-reaching implications for fair-market valuation if the market is forced to rely on aggregate or average sale figures.

You're going to need to see artists being able to charge money for works again, without it being a speculative object Felix Salmon

But even before the pandemic hit and amid global economic uncertainty as Brexit unfolded and the US amped up its trade war with China, auction sales took the biggest hit, diving 17% to $24.2bn, while, conversely, private sales at auction houses were mostly up, according to the 2019 Art Basel and UBS Art Market Report. Christie’s reported an increase in private sales of 24% to $811m (accounting for 15% of total sales), while, at Phillips, private sales grew 34% to $172m, accounting for 19% of the firm’s sales. Sotheby’s saw a slight drop from $1bn to $990m (17% of business in 2019), but a 70% jump from 2016.

In essence, secondary market sales are regressing into a "very club-ish" trade, Salmon says. “It's been the state of play in the art world for a while now, but I do think it's going to increase. The idea of consigning the things that you've loved for many decades to some kind of an auction where you have no idea what is going to happen or how they'll be received just isn't attractive at a time like this.”

Such handshake deals could also come under more scrutiny. The US Department of the Treasury Office of Foreign Assets Control (OFAC) released an advisory to art market participants on 2 November—one day before the election—highlighting the risk of incurring penalties stemming from dealings in high-value artwork associated with blocked persons and entities. It follows the Senate Subcommittee on Investigations' report issued in July, which demonstrated the facility with which foreign bad actors are able to evade OFAC sanctions and engage in money laundering through art market purchases.

"The government usually takes this step—issuing a warning—as a precursor to embarking on some sort of action so that a target cannot later complain that it was not put on notice of the risks associated with violating a sanction," says Georges Lederman, an attorney at Withers. He points to a specific footnote in the document, which advises "particular caution when dealing with artwork with an estimated market value of more than $100,000".

"We have been advising clients that the government will focus on some sort of monetary threshold when considering whether to impose monetary penalties for violating sanctions. This may be it," Lederman says. "The same is true with the Bank Secrecy Act (which imposes on financial institutions the requirement to file reports of cash transactions exceeding $10,000), some of whose provisions will likely be incorporated in the mandatory anti-money laundering protocols to be imposed on art market participants probably sometime next year.

The biggest change to the art market under the Trump administration—and perhaps the largest hurdle the trade will have to overcome in the next four years if not longer—is the wholesale implosion of the middle market, according to Salmon. Small galleries that nurture artists and given them “some semblance of a career” keep the art market vibrant, he says.

“You're going to need to see artists being able to charge money for works again, without it being a speculative object. Even if you're not the hot, figurative African artist of the month, you still [need to] sell art to collectors who will be there to support you,” he says. “And that was how the art market really functioned for most of the post-war period until quite recently. And for reasons that I don't entirely understand, it's basically stopped working that way.”

Galleries who support emerging and mid-career artists are in increasingly perilous positions due to the pandemic as federal aid has been notoriously slow and insufficient for many small business owners. Furthermore, in a recent survey of small and mid-sized US galleries conducted by The Art Newspaper, around 75% of respondents said they are facing severe financial hardship if not closure in the next year without a second stimulus plan—negotiations on which were tabled by Trump in the lead up to the election.

More importantly, it has become clear in the few days since the election that the Republicans will continue to hold the Senate, which has final sign-off on a second stimulus package if and when that arrives, and the conservative party has already made it clear they are not keen on a big spending plan. That means that even if Biden takes office on Inauguration Day in January, the chance of a federal aid package that can bail out medium-sized art galleries is “less than 1%. It's basically zero”, Salmon says. “America has never much cared about art galleries at the best of times. It's not Germany.”