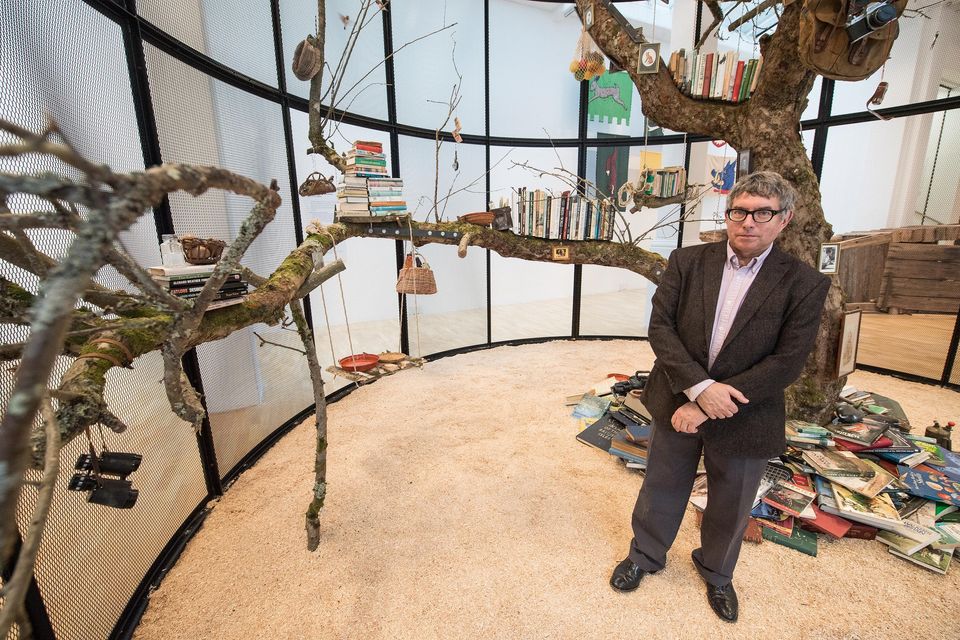 A giant walk-in aviary that fills the downstairs of London’s Whitechapel Gallery with the sound of live birds enthralled visitors at yesterday’s (13 February) opening of Mark Dion’s culture-meets-nature extravaganza. The newly commissioned work The Library for the Birds of London (2018) invites people to wander in amongst a flock of live zebra finches which flit, chirrup and chatter on and around a dead apple tree. The tree sits in a heap of environmental and bird-related books bedecked with ornithology and hunting ephemera—some rather ominous—including a picture of Alfred Hitchcock, a bullet-pocked target and the skull of a cat. As well as pondering our vexed and complex relationship with the natural world many of us (especially those of a certain age, such as your correspondent) were also nostalgically spotting long forgotten childhood favourites among the jumble of increasingly guano-besplattered volumes, which have been sourced from charity shops, car boot sales and donations. Another, rather younger, visitor who also found a familiar tome in the pile was the artist’s 18-month old son Fairfield who, with his mother the artist Dana Sherwood, was an early and enthusiastic visitor to The Library for the Birds of London. Here, Dion Jnr was very happy—if a little surprised—to be reacquainted with What’s Up?, one of his favourite pop-up bird books, which had apparently made its way into the piece directly from his room back in New York. According to his mother, items from the family home quite often pop up in Dion’s artworks, though judging by the firmness of Fairfield’s grip, in this case it was only going to be a temporary stop over.

Read my interview with the artist here.

• Mark Dion: Theatre of the Natural World, Whitechapel Gallery, London, until 13 May