All eyes are on H Queen’s this week, the freshly opened 24-storey building that is home to a host of world-class galleries. For William Lim, its Hong Kong-based architect, the project “sums up all of my interests”. He says: “I have always been interested in art, ever since I was a kid.”

H Queen’s primary mission is to give galleries the much-needed space that is so scarce in central Hong Kong. “None of the buildings here are really designed for art galleries,” Lim says. Despite the odd “gem”, such as the Pedder Building, it is hard to find older structures with the right ceiling height and facilities to move in works. Existing buildings also have floor-loading issues. “If you wanted to display a very heavy work, you would have to unload your entire library to counterbalance the weight,” he says.

Lim’s design resolves some of these issues. Each floor has a curtain-wall system that allows works of art to be lifted through a 3m by 4.5m opening from the outside. To do so, a crane has been installed on the roof that can carry a weight of up to 1.25 tonnes, similar to that of a small car. “That’s one of the special features we came up with to solve the logistics problem for galleries in the middle of the city,” Lim says.

He began collecting art at a young age, and says: “whenever I travel, I think that the best souvenir from a city is a piece of art”. Ten years ago, he decided to focus his collection on Hong Kong-based artists as a way to support the local scene. Here, the architect tells us about some of the artists and works on which his collection is built. 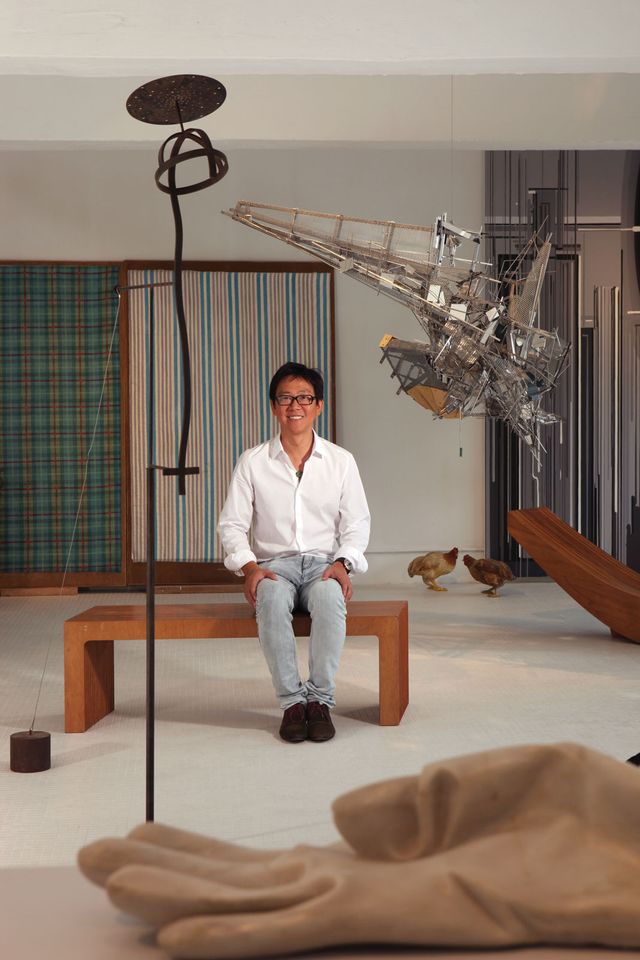 William LiM: It was a picture from the Sunday market at Hyde Park, which I bought during my first trip to London, when I was about 15. It was an Impressionist-style painting of little girls. I thought it was the best thing I could have owned. I still have it, but I don’t really put it out any more.

What work have you bought most recently?

Recently, I’ve been very interested in the work of a Hong Kong artist called Lulu Ngie, who is represented by Gallery Exit. She has a background in Chinese painting and started off doing ink on paper. Now she has gone into more oil-based work. I have been following her work for some time, but I was never quite convinced by the works on paper. As with many artists, all of a sudden you see one of their shows and it’s a turning point. When I saw her larger canvases in oil paint, I felt a connection to her work.

I guess the most unusual work in my collection is from when I bought 24 hours of an artist’s time. I did this with a Hong Kong artist called Tozer Pak very early on, maybe in 2006 or 2007. I bid for the work at an auction at Para Site. In those days, hardly anyone went to auctions there and works would go for the low estimate. That was also a very special, transitional time for the Hong Kong art scene.

So we locked ourselves in my studio for 24 hours. Pak was doing his own thing, and I did a series of 24 paintings of the artist. I set my alarm, and every hour I would wake up and do a painting—it was a real endurance thing. So this work means a lot in terms of myself as a collector and an artist. If I were to take one work, it would probably be this one. There are certain physical elements: all my 24 paintings, as well as two paintings Pak made and other items he collected such as some leaves and rocks.

I was once interested in a bottle of blood from an artist, but it had to be refrigerated all the time so I decided not to buy it. I have one work that is very difficult to maintain. It’s a Bonsai tree, which you have to tend. Eventually it died and the artist, Shen Shaomin, replaced it, but then it died again. Luckily, Shaomin has a fall-back position whereby he makes a dry version of the work—leafless; just the tree stem. I saw it in one of M+’s exhibitions of its collection, and decided to go for this preserved version rather than the live one.

How do you prefer to buy art?

I hardly ever go to a studio and buy directly from the artist. I think that galleries have a very important role as a mediator between the collector and the artist. They give provenance to a work. Unless an artist has no gallery to represent them, I would usually go through the gallery. Or I would buy through an auction house, which also gives provenance to a work. And I’m really looking forward to Art Basel—every year it’s a must-do thing for me.

As an architect, I have always felt an affinity for artists who make strong statements about architecture. So people like Donald Judd or Dan Flavin are really interesting to me. I know that a Donald Judd is probably not as unreachable as, say, a Francis Bacon, but for me, a nice work by Judd would be my dream.

What has been your worst purchase?

I think we went through a phase in the Chinese contemporary art scene when art became crazy and artists started to produce works in an almost factory-type way. I did buy some works at that time that I regret because they were clearly produced for the commercial market and didn’t keep their value. After a while you could hardly even give them away.