Two women who are part of the Ukrainian feminist group Femen were charged for topless protests, one of which was in a Paris museum 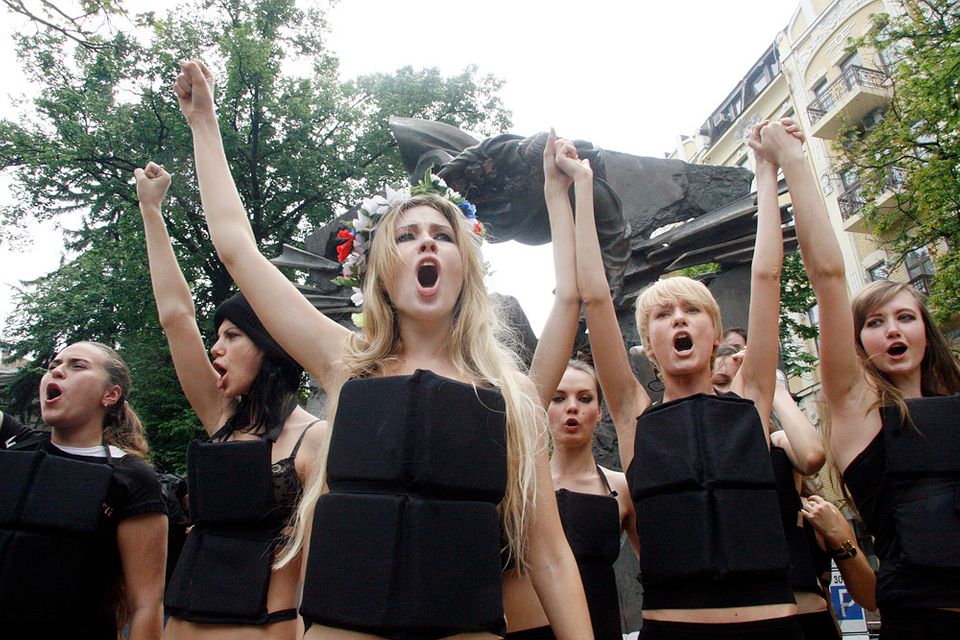 Any woman who bares her breasts in public, regardless of her motivation—political, artistic or otherwise—can be charged with “sexual exhibitionism”, recent French supreme court rulings have reconfirmed. This upholding of France's 19th-century law, which is punished by one year in prison and a fine of up to €15,000, comes after the court made its final decisions on two cases of feminist activists charged with exhibitionism following protest performances. The law exposes women to prosecution for things like campaigning on posters for the prevention of breast cancer; artistic and theatrical performances that involve nudity; or simply sunbathing on the beach in St Tropez.

In January, the supreme court confirmed the one-month suspended sentence of an activist belonging to the Ukrainian topless feminist group Femen who revealed her breasts in a church. The ruling stated that "there is no doubt the breasts are a sexual part of a woman’s body" and thus showing them in public in any circumstances is an offence against decency. Then on 26 February, the supreme court ruled to confirm the exhibitionist charge of Iana Zhdanova, also a member of Femen, who carried out a topless protest performance at a museum in Paris in 2014. However, the supreme court agreed that she may be acquitted on the grounds that the ruling might have infringed on her “freedom of expression rights in a disproportionate way”.

The ruling over Zhdanova closes a case which has been causing consternation and division among French judges for the past six years. In June 2014, Zhdanova painted "kill Putin" on her breasts and stabbed a wooden stake into a wax model of the Russian leader at Paris’s Musée Grévin, breaking its head. In October 2014, the activist was therefore charged for damaging museum property but also for sexual exhibitionism, and fined €1,500. In January 2017, the court of appeal reduced the fine to €600, claiming that a woman showing her breasts "without any sexual intention" could not be liable to a charge of exhibitionism. The supreme court then annulled that judgement. But, in an extraordinarily rare move, the court of appeal openly contradicted this opinion, and again acquitted the Femen activist last December.

Now the French supreme court has found a way out of the impasse, ruling to confirm Zhdanova's acquittal on the grounds that the ruling might have infringed on her freedom of expression, thus preventing the case being taken to the European Court of Human Rights.

Zhdanova's lawyer, Marie Dosé, expressed her "frustration that the supreme court did not take this opportunity to change an archaic law”.

UPDATE, 27 February: The headline and the text of this article was modified to reflect the wider implications of the French court's ruling