Prospects are brighter for the world’s first art fair, which opens this week, thanks to its director Daniel Hug

One of the most repeated statistics to demonstrate the growth of the contemporary and Modern art market is that 50 years ago there was one dedicated art fair and now there are more than 200. What is perhaps more extraordinary is that the very first fair—Art Cologne, set up in 1967—is still going, and its history comes to the fore at its 50th edition opening this week (14-17 April).

The ride hasn’t always been easy, especially during the years when the other mega-fairs (and the trend-setting city of Berlin) began to steal the scene.

“Cologne works, this fair works—they have always worked, but they have never been fashionable,” says Daniel Hug, the fair’s director, who joined in 2008 to turn Art Cologne around.

Minor artist, major director Hug has a suitably diverse range of experience within the art world. Born in Zurich the year after his fair was founded, and the grandson of the Hungarian artist László Moholy-Nagy, he moved to Michigan as a child and graduated as “a minor artist” from the Art Institute of Chicago with a bachelor’s degree in studio arts and art history. He started a gallery in Chicago (called Rx) in 1995 so he could make the contacts to get himself represented—and made a success of it.

In 2000 Hug went to Los Angeles, originally at the suggestion of the directors at Blum & Poe gallery, who thought he could join them in a new building they were planning to open. That project fell through, but by 2003 Hug had opened his own space in the city’s buzzing Chinatown, where other galleries included Golinko Kordansky and Steve Hanson’s China Art Objects. Being rejected from the Frieze art fair inspired Hug to get involved as an adviser to the ArtLA fair, where he also first exhibited in 2006. “There were 40 galleries that you’d never heard of—and us,” he says. He helped refine the gallery list and the fair management for future editions to critical acclaim.

Smaller, more select Come 2008, Hug was in prime position to reverse Art Cologne’s diminishing importance. His impact was immediate. He reduced the gallery numbers even further (from 250 to 180) and worked on improving the haphazard floor for contemporary art. He began to rebuild the fair’s relevance to the respected, international galleries, but did so—and is still doing so—slowly, and never at the expense of what he calls “progressive” art (his favourite word, he says). “Quality is what matters in the end,” he adds.

His most radical decision—Andrew Renton, the director of Marlborough Contemporary, describes it as “subversive and brilliant”—was to bring another art fair within its walls. For the 2012 edition, Hug invited Nada, the hip Miami and New York fair for young artists, to join Art Cologne. The tie-up, then called Nada Cologne and since renamed Collaborations, adds sparkle to a stately fair and ups its American exhibitors, who are a distinct minority. No other established art fairs have such a partnership. It has not been universally popular (with either Nada or Art Cologne’s younger galleries) and needed a rebrand to integrate it more into the fair. “I know why they did it, but it’s been done a bit clunkily,” says Stephanie Dieckvoss, a lecturer and journalist. Hug says that he, and Nada’s director Heather Hubbs, are listening to all views and that concerns such as booth sizes are being addressed.

Clash avoidance (with Brussels at least) Art Cologne is still a work in progress in terms of its impact on the international scene. While Berlin’s status may have weakened, Brussels is on the up and Hug has separated his fair from Art Brussels by a week this year to avoid a clash in which Art Cologne was losing out. The 2017 edition will clash with Berlin's gallery weekend, however. Hug says that he isn’t going head to head with the mega-fair franchises. “There are too many fairs that try to look like Frieze, Fiac or Art Basel,” he says.

Meanwhile, Germany is going through a challenging period economically, with art dealers hit on all sides by legal and fiscal changes. Art Cologne’s owner, the event group Kölnmesse, recently wrote a open letter warning that German fairs could lose their competitive edge because of impending cultural assets protection legislation.

One other outstanding question for the fair is whether Hug is there to stay. Nine editions is a long time at the helm. He is uncharacteristically tight-lipped, saying only: “I love living in Cologne, which is the centre of Europe.”

Initiatives to mark the fair’s 50 years this year include a special show of works, all from Deutsche Bank’s collection, made in 1967, such as Josef Albers’s SP (Homage to the Square), Sigmar Polke’s Cottage and Georg Baselitz’s Young Dogs. “We are pleased to be able to bring the progressive founding spirit of 1967 into the Cologne exhibition halls, [which] even today stand for the progressive in art,” Hug says. 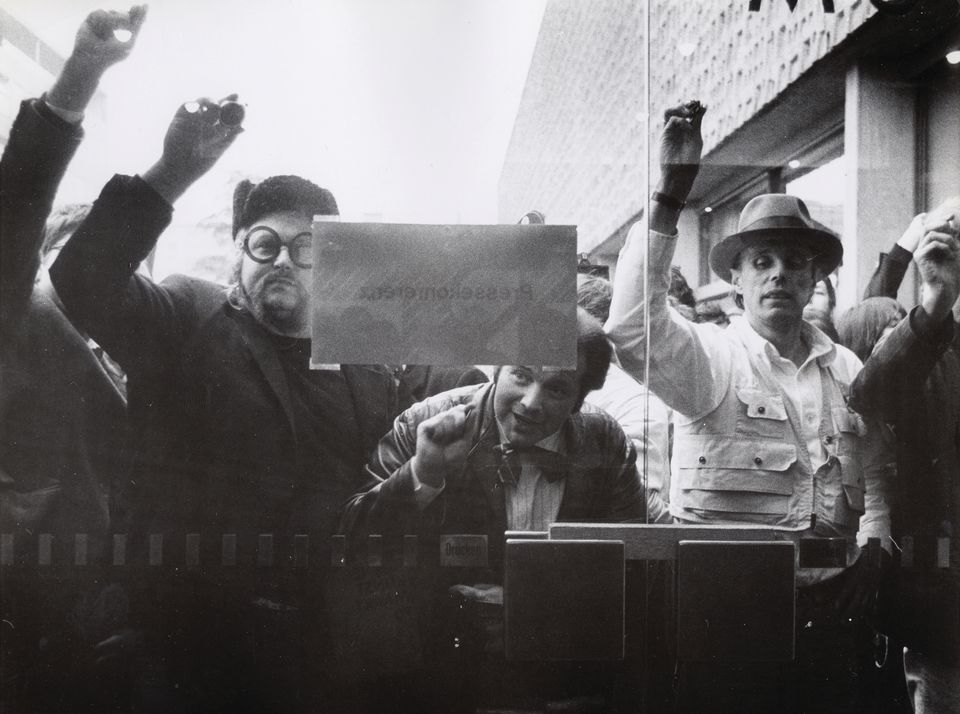 Breaking down the doors: Joseph Beuys (on the right) and Wolf Vostell (on the left) protest against Art Cologne’s refusal to admit artists. Photo: © Wolf Prange

Art Cologne was founded as Kunstmarkt Köln by the local gallerists Hein Stünke and Rudolf Zwirner (David Zwirner’s father) in 1967. They spotted that despite the depressed economy at the time, Germany’s wealthy Rhineland industrialists wanted to buy art. The early editions of the fair were welcomed and proved a platform for some of the emerging Neo-Expressionists at the time (including Anselm Kiefer, Gerhard Richter and Sigmar Polke). The first fair opened with 16 exhibitors.

Art Cologne soon earned a reputation for being too exclusive. Artists, for example, were not allowed in, and Joseph Beuys staged a protest in 1970 (the year that Art Basel was founded)partly as a response. “Art Cologne was first to do many of the things that art fairs do today, including learning from our mistakes,” says its director, Daniel Hug. Between 1976 and 1983, the fair alternated between Cologne and Düsseldorf and began to establish its international credentials.

The fair’s golden period began just before the Berlin Wall fell in 1989, alongside the rise of artists from nearby Düsseldorf (Andreas Gursky, Thomas Ruff, Rosemarie Trockel) and other German superstars such as Neo Rauch and Albert Oehlen. “It was undoubtedly the fair I went to in order to learn what was happening in contemporary art in the early 1990s,” says Andrew Renton, the director of Marlborough Contemporary, one of this year’s exhibitors. Then in 1994, Art Cologne, which was beginning to look old fashioned, was bought by the event organiser Kölnmesse. Exhibitor numbers at the fair swelled to 323 in this year.

By the time that Hug arrived as director in 2008, Art Cologne had thoroughly lost its way. Berlin was rapidly becoming Germany’s contemporary art destination of choice, Art Basel had cemented its place as the premier art fair in Europe, and more competition came with Frieze (which opened in London in 2003). After extending to a bloated, ten-day event and, in 2007, moving its date from November to April, Art Cologne received plenty of public criticism from exhibitors. The fair’s 2008 edition took place without a director; Gérard Goodrow had left in January while Hug was officially appointed in May, although he did take on the role of acting director before then.

Hug’s appointment and his focus on quality over quantity were welcomed, although the fair’s clash with the more contemporary Art Brussels was becoming an issue by 2012. With only a 90-minute train journey between the two, the fairs are a week apart this year. Dealers remain very loyal to Art Cologne, though, and even those who have previously left (such as Eigen + Art, Karsten Greve and the Berlin and Paris gallery Max Hetzler) are now back on the exhibitor list.

Can Clubhouse recreate those art world conversations we are all missing?

Can Clubhouse recreate those art world conversations we are all missing?