UK capital's heatwave lends a relaxed summer atmosphere to cross-collecting fair, where deals are done at a slower tempo than at contemporary events 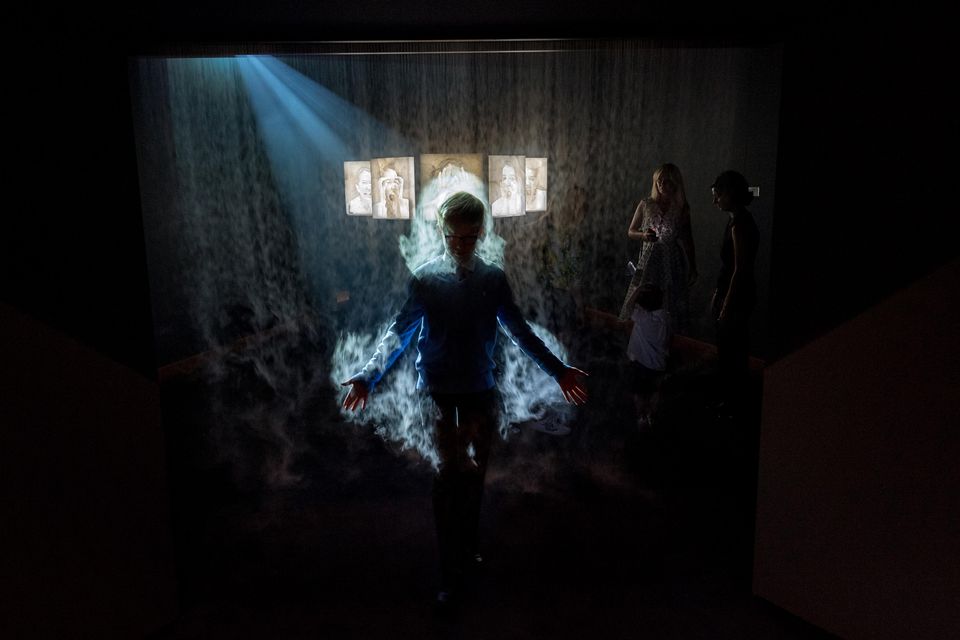 For the performance artist Marina Abramovic, public reaction is all important, and her new installation, Five Stages of Maya Dance (2018), in the entrance of Masterpiece London (until 4 July) is certainly getting a lot of attention—including from the security guards.

The series of five alabaster portraits, accessed by walking through a wall of vapour upon which Abramovic’s face is projected, forms the second Masterpiece Presents, an initiative started last year to enhance the showing of contemporary art at a cross-collecting fair that, while diverse, has a scarcity of primary market material by well-known artists. It is a collaboration with Lisson Gallery and the Madrid-based company Factum Arte.

Abramovic does not “tend to visit art fairs” but, as she says on this week’s episode of The Art Newspaper Weekly podcast, the placement here is important: “The work is going to live through the public eye, so I’m very interested in the reaction. So, being here in Masterpiece is quite important because you have a large amount of different professions [visiting]”. Hauser & Wirth's Wunderkammer stand at Masterpiece London, including the Hans Arp relief sold during the preview (centre back) Hauser & Wirth

Performance is, Abramovic says, “an immaterial form of art, it is time-based art. You have to be there to witness it and all that is left is the memory”, so creating a permanent work, such as this, is somewhat of a departure. Five Stages of Maya Dance is now on “on hold for an important institution” for an undisclosed price says a Masterpiece spokeswoman.

Abramovic was attracted to working in alabaster due to its translucent quality and history. “It’s such an old, ancient material from Egyptian times, that actually really caught my interest” she says. The material’s long history is evident elsewhere in the fair too. The London-based dealer Benjamin Proust, for instance, has a cluster of four Ancient Egyptian alabaster vessels on his stand which (befitting the aim of the fair as a whole) mixes art, antiques and design dating from 5,000BC to a painting from 1980. Proust is an advocate of the fair and sends out 400 tickets. “My friends who are not in the art world like to come to this fair, it’s a fun” he says.

New exhibitor Hauser & Wirth has made a concerted effort to fit in with the fair’s aesthetic and make friends with the neighbours. Its Wunderkammer-themed stand mixes its blue-chip Modern and contemporary art with, quite unexpectedly, 19th-century Black Forest armchairs, flanked by carved bears, and other antique furniture borrowed from Butchoff Antiques. In return, the London-based antiques dealers are showing some of Hauser & Wirth’s art on their stand. 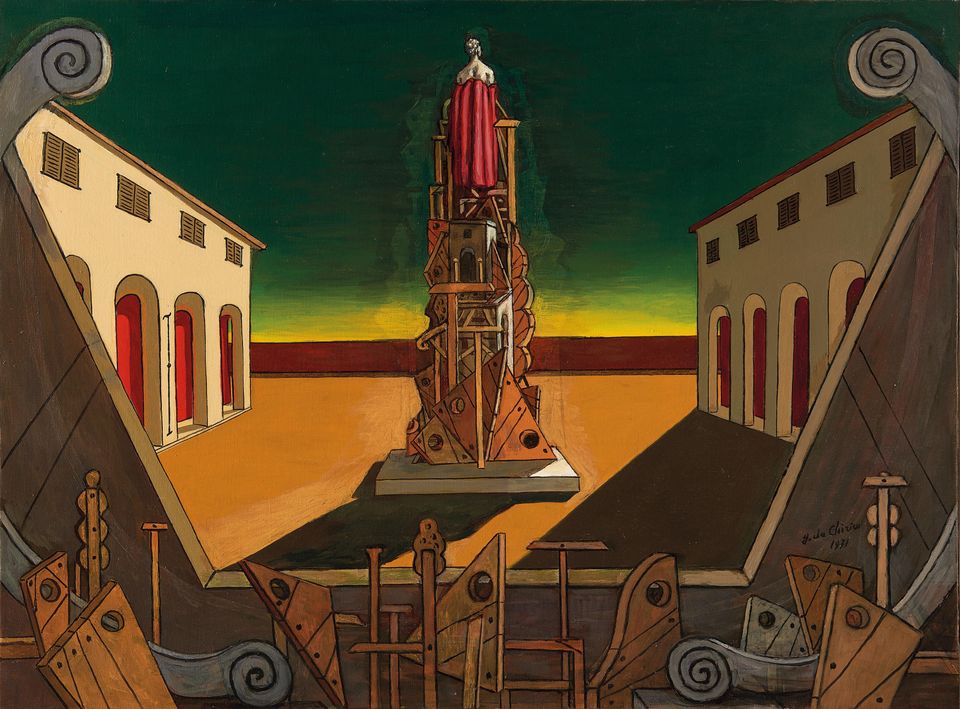 Early sales by the gallery included Hans Arp’s Cuillère et nombrils (Spoon and Navels, 1928), a painted wooden relief, made shortly after Arp moved from Zurich to Paris, leaving behind his earlier Dadaist works and starting to produce cut-outs and reliefs that toy with Surrealism. It sold for €1.5m to a European collector, a new client for the gallery.

“The fair has a different tempo to Frieze and Art Basel, the sales take longer to happen but I think it’s nice. I’m enjoying having time to speak to people and really explain the work” says Neil Wenman, the senior director of Hauser & Wirth London. He says visitors are “a good calibre…many of them we know already, but many we don’t too”. 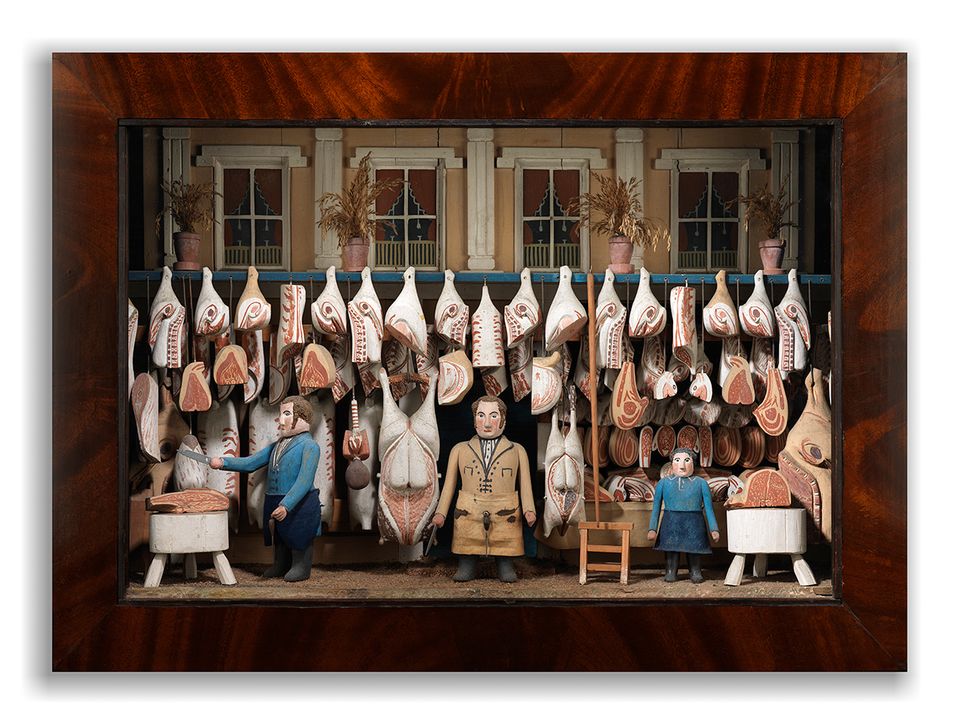 A butcher's shop diorama which sold at Masterpiece London, priced at around £20,000 Robert Young Antiques

Mazzoleni London’s sales so far include a striking, Op-Art oil on panel, Bellatrix – Bie (1956), by the Hungarian-French artist Victor Vasarely (priced at€ 100,000), an Alberto Burri Plastica work (price undisclosed) and Giorgio de Chirico’s Grande metafisico con squadre (1971), which was priced around around €430,000. “So far, so good at Masterpiece”, says Mira Dimitrova, the managing director of Mazzoleni London.“We are enjoying our new main aisle booth location and are impressed with the increased space and volume of the fair design… It feels like the fair has come of age.”

The London-based folk art dealer Robert Young has already sold more than 30 pieces from his stand, including an intricately painted marriage chest on stand from the Channel Islands (around 1750) which was priced at £65,000, and—neatly illustrating the range of this fair—an English butcher’s shop diorama (around 1860) priced at around £20,000.