Oriel College's plan to keep the sculpture of "racist" 19th-century British mining magnate "does not reflect the Oxford we represent", say staff in a letter 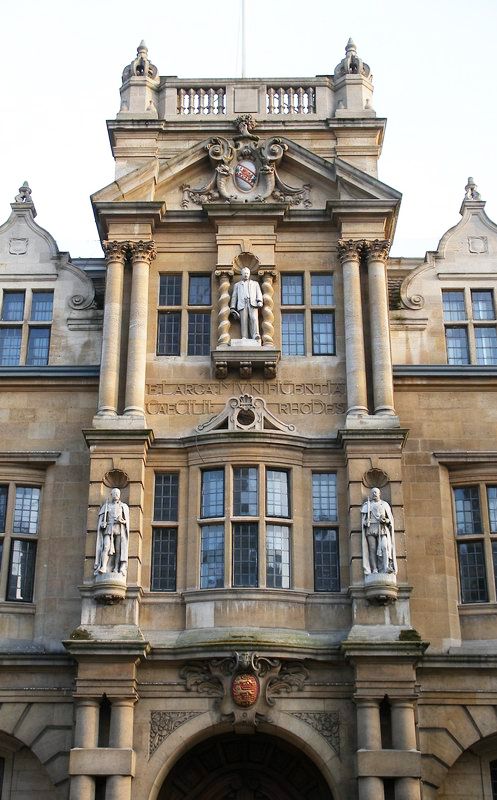 The facade of the Rhodes Building at Oriel College, with the Cecil Rhodes statue top-centre Photo: Anders Sandberg

More than 350 academics from across the University of Oxford in England have written to the vice-chancellor, professor Louise Richardson, in protest of Oriel College's decision to keep in place the statue of the British imperialist Cecil Rhodes.

In a letter posted on social media, the signatories who come from a range of Oxford University colleges, including Merton College and Wadham College, say: “The decision to retain the Rhodes statue is not consistent with the vision of our university in which we promote equality, diversity, and inclusion. The decision grievously damages the integrity of our attempts to confront racism. The decision does not reflect the Oxford we represent.”

Last month, Oriel College said it had no plans to “begin the legal process for relocation” of the statue of Cecil Rhodes following a report by an independent commission which recommended that the college should “now invest in understanding and contextualisation of its relationship with Rhodes”. The commission, chaired by Carole Souter—the current Master of St Cross College, Oxford, and the former chief executive of the National Heritage Memorial Fund and Heritage Lottery Fund—was set up last year to assess the fate of the contentious sculpture by Henry Alfred Pegram that stands on the façade of the University of Oxford college.

The strongly worded letter from the university academics states: “In June 1899, 94 of our predecessors, Oxford academics, wrote to your predecessor, the vice-chancellor of the University of Oxford. They wrote to express their ‘regret’ that the university was about to bestow an honorary doctorate on Cecil Rhodes. In the spirit of that protest in 1899, we, the undersigned members of the University, wish to express our regret, our disappointment, and our anger at Oriel College’s decision not to remove the statue and plaque to Cecil Rhodes.”

It continues: “As scholars, it is only right that we correct the idea that views 'of the time’, at the turn of the last century, condoned celebratory titles and monuments to racist imperialists. They did not. Oxford dons protested those decisions, and so do we, over 120 years later.”

The Art Newspaper understands that the letter has been circulated across the university; the vice-chancellor’s office had not responded to a request for comment at the time of writing.

Last June, the governing body of Oriel College voted in favour of removing the statue of Rhodes (the college launched the independent commission into the "key issues " surrounding the contentious work at the same time). The group said in a statement that they "expressed their wish to remove the statue of Cecil Rhodes and the King Edward Street Plaque [commemorating where Rhodes lived in 1881]. This is what they intend to convey to the independent commission of inquiry."

After Oriel College said it would not remove the sculpture, Neil Mendoza, the provost of Oriel College and government commissioner for Cultural Recovery, said in a statement: “We understand this nuanced conclusion will be disappointing to some, but we are now focused on the delivery of practical actions aimed at improving outreach and the day-to-day experience of BME students. We are looking forward to working with Oxford City Council on a range of options for contextualisation.”

Campaigners from the Rhodes Must Fall in Oxford group—which was formed by students in 2015 and was reignited by the toppling of the Edward Colston statue in Bristol last year by Black Lives Matter demonstrators—say that the 19th-century politician and diamond mining magnate represents white supremacy and supported apartheid-style measures in South Africa.

Meanwhile, the sculptor Antony Gormley told the Financial Times that the Rhodes statue should be turned so that it faces the wall. “Rhodes should remain in his niche. If we need to readdress our relationship to him, I would just simply turn him to face the wall rather than facing outwards,” he said. Adjusting his position would mark “an acknowledgment of collective shame”, Gormley added.