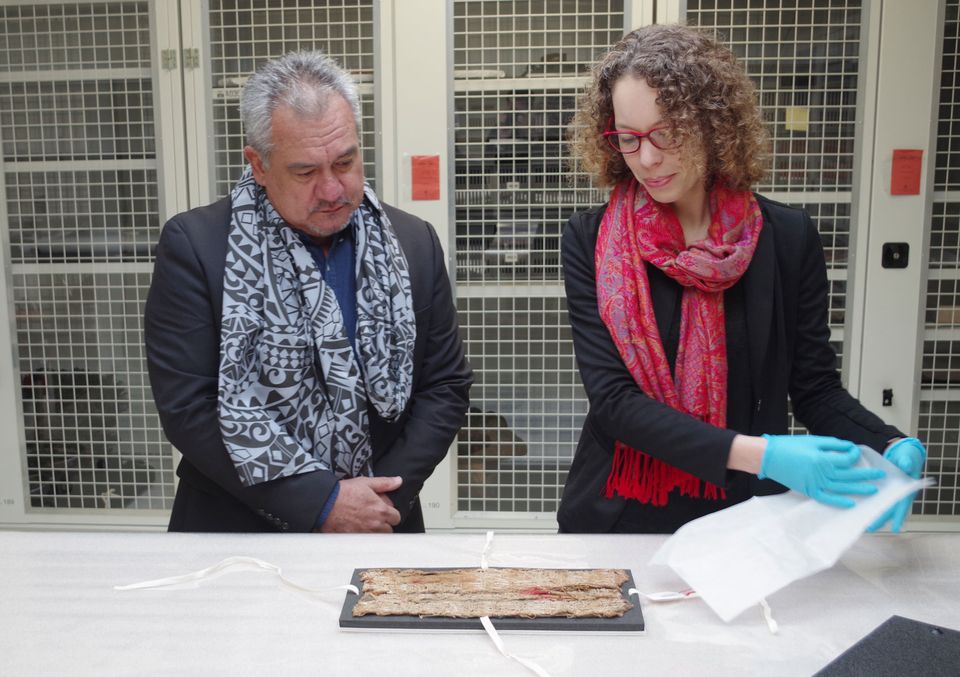 The Musée du Quai Branly-Jacques Chirac in Paris will send a rediscovered fragment of an 18th-century Polynesian royal feathered belt, or maro 'ura, to the Museum of Tahiti and the Islands in 2021 on a three-year renewable loan. The rare artefact will be displayed in a collaborative exhibition at the French museum from November 2020 to March 2021 before being returned to Tahiti.

The loan forms part of a five-year agreement between the museums to co-operate on research, conservation, documentation and exhibitions. The president of Quai Branly, Stéphane Martin, and the President of French Polynesia, Edouard Fritch, ratified the deal in October 2016.

Currently on display in Quai Branly’s Oceanic section, the belt fragment is believed to have been part of a four-metre-long maro 'ura made from hundreds of red and yellow parrot feathers, overlaid with stitching, that would have been worn by a chieftain during coronations and ceremonial occasions. Over time, it has become discoloured by the bark underlay.

In his 18th-century journal, the British explorer Captain James Cook described having seen King Pomare I of Tahiti (1744-1803), who unified the islands, donning the elaborate girdle. Attached to it was a red naval flag that, according to testimony, belonged to Captain Samuel Wallis who landed on Tahiti in 1767, before Cook’s voyage.

Quai Branly’s fragment, which formerly belonged to the French collector and dealer Charles Ratton, was identified as coming from the king’s maro 'ura by Guillaume Alévêque, a French anthropologist who specialises in French Polynesia.

“In 2015, whilst studying the museum’s collections, I noticed this object that up until then had been considered as the envelope of another object,” says Alévêque, who had been studying objects from the first encounter between Tahitians and European navigators. “The maro 'ura was the most important object of political and religious power, and red feathers had the most value in the Tahitians’ eyes.”

Alévêque adds that all other traces of maro 'ura disappeared at the beginning of the 19th century. The longest example is believed to have been a six-metre-long girdle worn by King Tamatoa on the island of Raiatea.

The Museum of Tahiti and the Islands is one of several international institutions that have ongoing partnerships with Quai Branly. These include five-year agreements with Senegal’s Museum of Black Civilisations and the Central Library of the Cheikh Anta Diop University, and the Museum of Civilisation in Cameroon, as well as three-year agreements with the Evangelical University of Cameroon and the School of African Heritage in Benin.

Asked whether other countries have requested that works in the Quai Branly collection be restituted, following French president Emmanuel Macron’s pledge in November 2018 to return 26 statues and regalia to Benin, a museum spokesperson says: “The museum is not the owner but the manager and custodian of its collections; it is the French state, in this case the government and the parliament, that can take provisions on restitution. Requests are made state-to-state; no requests are made to the museum.”