In an innovative move for the Metropolitan Museum of Art, New York, its department of Asian art and the Costume Institute have collaborated to organise “a cinematic journey through our galleries” that traces the impact of Chinese aesthetics on Western fashion, according to Thomas P. Campbell, Director and CEO of the Met. The exhibition China: Through the Looking Glass was organised by the Costume Institute curator Andrew Bolton and Maxwell Hearn, the head curator of the department of Asian art. The organisers have placed 140 examples of haute couture and avant-garde ready-to-wear clothing alongside masterpieces of Chinese art, including jades, bronzes, calligraphy, lacquer and porcelain. Bolton explains that the show was inspired by Lewis Carroll’s novel Through the Looking Glass because “through the looking glass of fashion, designers conjoin disparate stylistic references into a fantastic pastiche of aesthetic and cultural traditions”. For Bolton, the show is about “a China that exists in collective fantasy” and the exhibition reconsiders Orientalism as an appreciative cultural response by the West in its encounters with the East through careful juxtapositions of Western fashions with Chinese costumes and decorative arts. 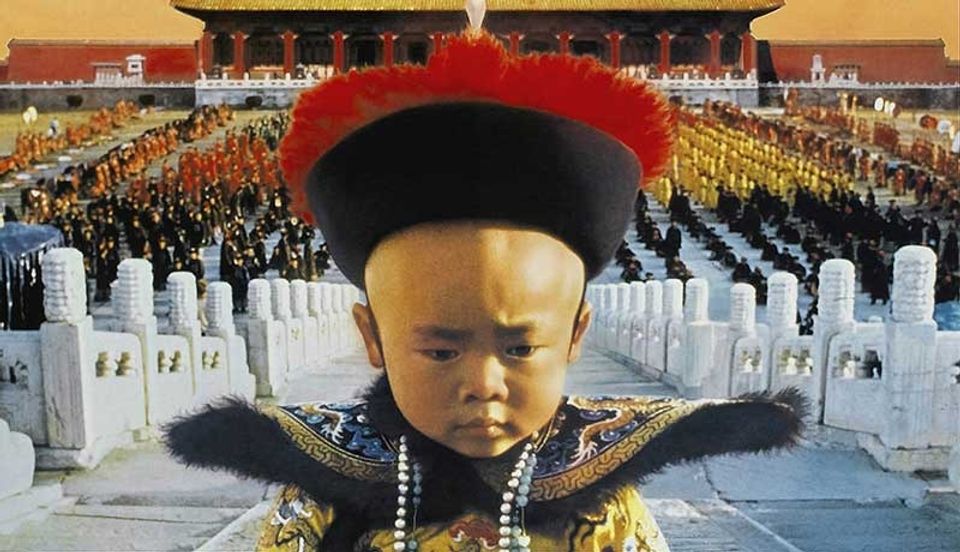 Film still from The Last Emperor (1987). Photo: Courtesy of The Metropolitan Museum of Art, HELMSDALE FILM CORP. / THE KOBAL COLLECTION

The show’s artistic director, the Chinese film-maker Wong Kar Wai, has installed large film screens in the galleries, offering dramatic interventions in the form of high-volume film backdrops. Wong explains that, “as Chinese film-makers, we hope to create a show that is an Empire of Signs—filled with meaning for both East and West”. He has carefully choreographed film sequences to demonstrate “how visions of China are shaped by narratives that draw upon popular culture”. 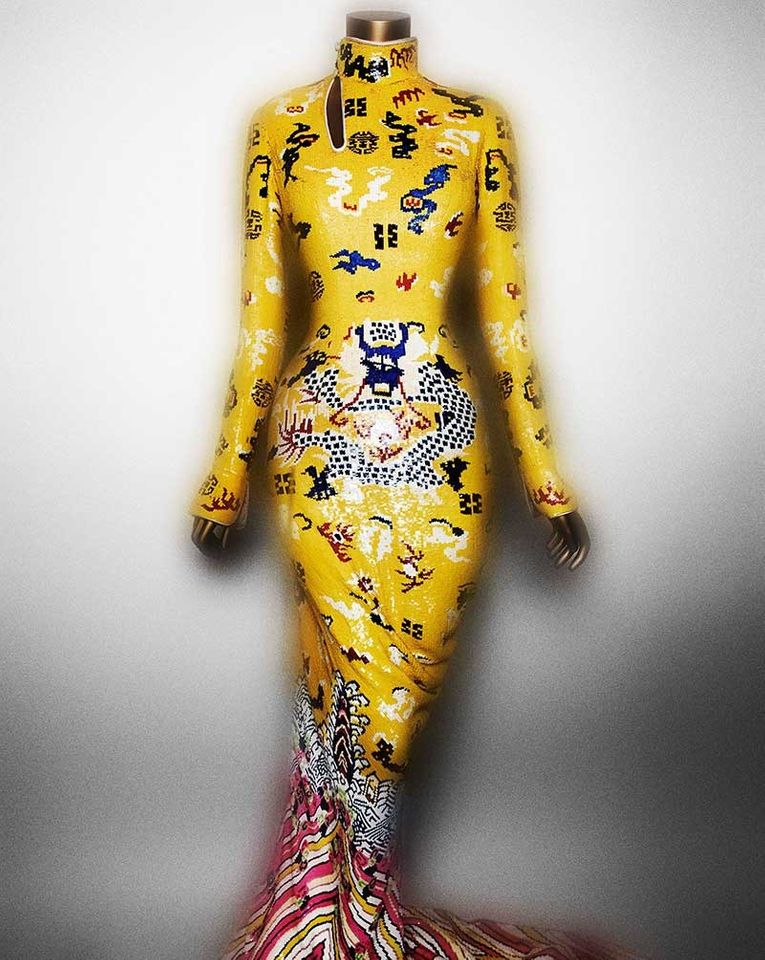 The exhibition tackles three principal sartorial symbols associated with Chinese culture: the Manchu robe of the Imperial court (Qing dynasty 1644-1911), the close-fitting qipao dress (popular in the 1920s-40s) and the Zhongshan (or Mao) suit (worn from the 1950s-80s). (The show also includes headwear by the British milliner Stephen Jones.) The influence of Imperial court costume is demonstrated in a tightly-curated gallery displaying costumes that include a blast of yellow silk in an embroidered satin Evening Dress (autumn/winter 2004-05) by Tom Ford for Yves Saint Laurent, juxtaposed with the Semiformal Robe for Qianlong Emperor (1736-95, lent by The Palace Museum Beijing) with its royal yellow colour and intricate embroidery of Chinese imperial dragon symbols. The piece is accompanied by a film backdrop from The Last Emperor by Bernardo Bertolucci. At the opposite extreme, the “Mao suit”, embraced in Europe by “a left-leaning intelligentsia specifically for countercultural and anti-establishment effect” (according to the gallery 132 wall text), inspired Vivienne Westwood’s gray cotton poplin Ensemble (spring/summer 2012), displayed with edited cinematic sequences from films such as In the Heat of the Sun by Jiang Wen Golden. 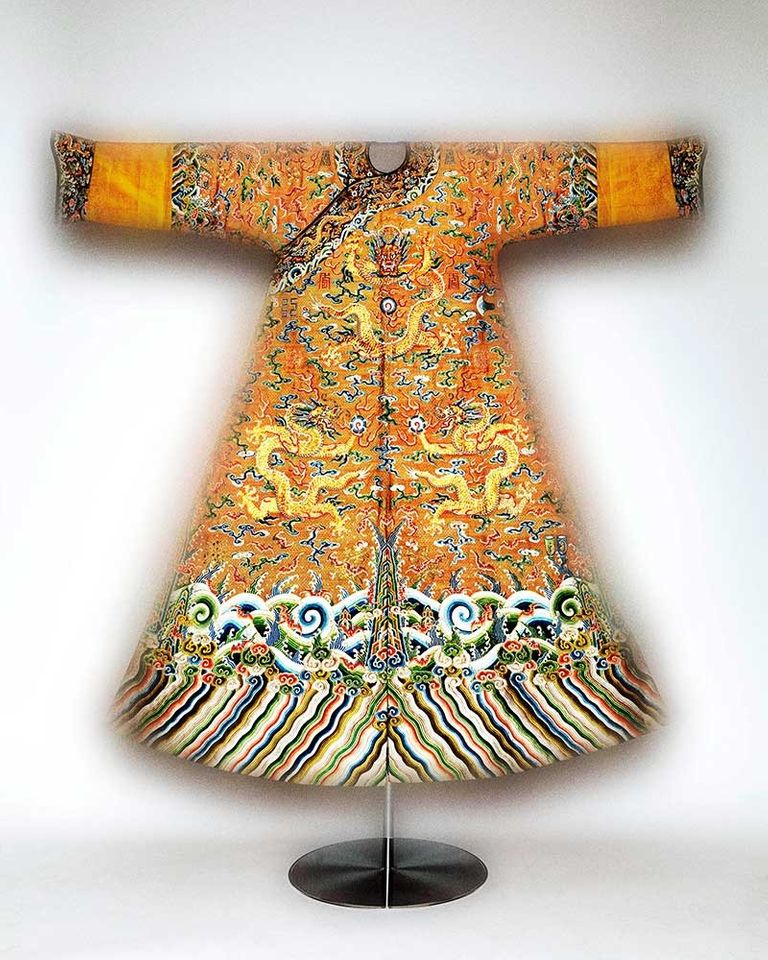 China: Through the Looking Glass is an ambitious, all-embracing show offering an overview of the influence of historic Chinese decorative art on 20th and 21st century Western fashion. Perhaps the last word should go to the gold Evening Gown (spring/summer 2007) by the Chinese designer Guo Pei on view in gallery 208. Using Buddhist imagery (the bodice in the shape of the lotus flower) in gold lamé embroidered with gold and silver silk, metal and sequins, the piece takes a Western crinoline silhouette for the shape of its skirt. Dramatic and stylish throughout, it is impossible to visit this exhibition and not admire the beauty and artistry of its many exhibits.

Susan Jenkins is a curator and freelance writer specialising in the fine and decorative arts.

China: Through the Looking Glass, Metropolitan Museum of Art, New York, until 16 August