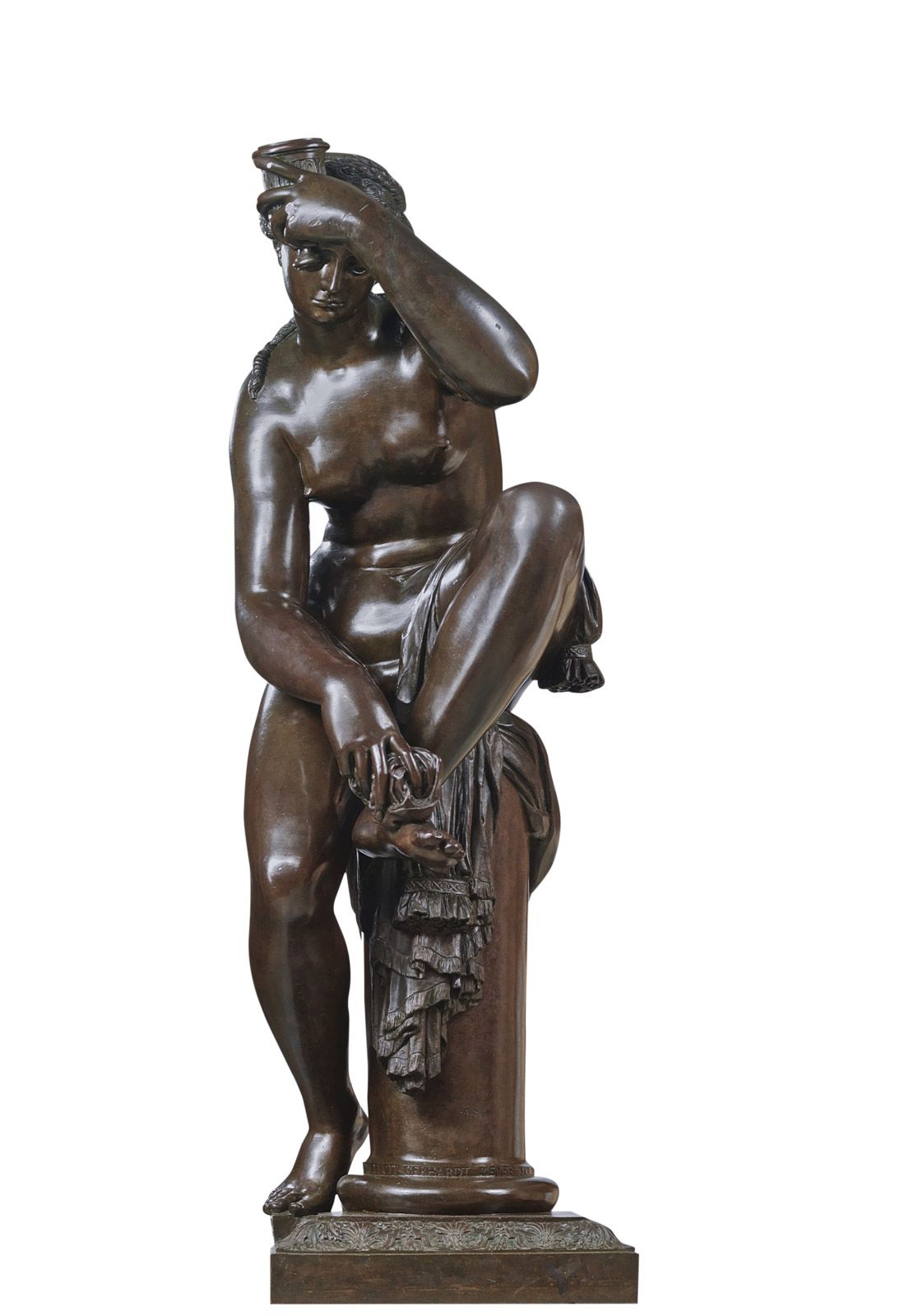 A nude female bronze, here identified as Giambologna’s Venus, was rediscovered in a French scrapyard in the 1960s © Dr. Georg Steinmetzer

From the title on its cover, one would be forgiven for thinking that this weighty book is a general introduction to the life and work of Giambologna (1529-1608), the greatest sculptor working in Italy between Michelangelo and Bernini. It is, however, essentially a consideration of a particular gift (1598-1600) from Ferdinando I de’ Medici, the Grand Duke of Tuscany, to Henri IV of France of six large garden statues, cast in bronze from the master’s models. Indeed, at its heart is an even more specific and detailed case study of just one of them, a statue of a seated Venus. A nude female bronze, here identified as Giambologna’s Venus, was rediscovered in a French scrapyard in the 1960s. This remarkable objet trouvé is now co-owned by the lead author of this publication, the dealer Alexander Rudigier.

Most of this book—including brief but richly illustrated sections on Giambologna’s later work and style—was first published in 2016 by Rudigier and Blanca Truyols in a French periodical, the Bulletin Monumental, which is why it is here presented as a “revised edition”. In the Bulletin, Truyols’s important archival discoveries concerning Henri IV’s garden sculpture were placed first, whereas in the new book they are in Part II at the back, thereby prioritising the discussion of the female bronze.

The Rudigier bronze is closely related to a marble female figure now in the J. Paul Getty Museum, Los Angeles, the attribution of which to Giambologna was once much disputed but is now widely accepted. The identification of this bronze with the Venus sent to Henri IV, and Giambologna’s direct involvement with it, have been similarly controversial. While several leading sculpture specialists are evidently in favour (a supportive statement from Lars Olof Larsson is included), several others have not been, at least hitherto.

Dorothea Diemer and Linda Hinners set out the opposing case for this bronze to be a much later Swedish after-cast of the Getty marble in an article in the Burlington Magazine (July 2018). In a subsequent exchange of letters in that periodical (October 2018), they laid down the challenge to Rudigier to publish his contrary evidence “in extenso”. The book under review works hard to do just that, in its revisions to the previous text, and in particular in new appendices including technical reports added to amplify and bolster the arguments for Giambologna’s involvement with the Rudigier bronze.

The debate over the identification and attribution of the Rudigier bronze, and when, where and by (and for) whom it was cast, hinges on a number of contestable and potentially contradictory pieces of evidence; in particular, the inscription of the founder and of the date of casting can be read as either 1597 or 1697. To every strand of the case against an earlier date and Giambologna’s direct involvement, Rudigier robustly presents a counter-claim.

Much of the evidence he marshals to his cause is instructive in its own right; but it will be fascinating to see if it is enough to persuade the doubters—and the art market. Ultimately, for all the scientific analysis and archival research that is brought to the debate, the opinions of a handful of the most authoritative Giambologna specialists will be critical.

In contrast to the functional format and production values of the Bulletin Monumental, this book is a luxury item, with a handsome format, lavish slipcase, high-quality paper and a characteristically elegant design by Laura Parker. The excellent and abundant new colour photographs by Georg Steinmetzer, which provide often highly sensuous details of the Rudigier bronze and comparative works by Giambologna, are undoubtedly a huge advance from the journal’s mostly black-and-white images.

• Robert Wenley is the deputy director of the Barber Institute of Fine Arts, the University of Birmingham