Charles Saatchi came into @newportstreetgallery_london today. I invited him to see my new show of older works called “End of a Century”. We go back a long way. I remember the myth surrounding Charles that he bought whole exhibitions not just a few paintings and he changed the art world forever, and I remember first going into the free entry Saatchi Gallery in Boundary Road when I was a student and no one had bought a piece of my work for more than £50. When I first saw the space, it was so vast and white, I got snow blindness. I had never experienced anything like it. The art and the space blew me away, and from that moment on I only wanted to make art for that space. I dreamed of showing my work there but thought it an impossible dream and God knows how, but a few years later it actually happened. My dreams came true and I had a show there! Thanks Charles for the show, your belief in me and the gallery and for bringing all that amazing international art to inspire my generation and beyond! Art of our time.

Friends reunited—Damien and Charles buddy up

We all know Damien Hirst and Charles Saatchi are thick as, so it was heartening to see the legendary collector drop in on his old protégé earlier this week at Newport Street Gallery. “I invited [Charles] to see my new show of older works called End of a Century,” Hirst writes on Instagram. “We go back a long way.” Indeed they do, with numerous peaks and troughs along the way. On the up side, Saatchi invested heavily in the YBAs in the 1990s. But in 2003, Hirst bought back a dozen of his works from Saatchi after the pair apparently fell out over a show of the artist’s works at the former Saatchi Gallery in County Hall. In his latest social media post, Hirst is fulsome in his praise for the media-shy collector, recalling Saatchi’s groundbreaking 1980s Boundary Road gallery. “I had never experienced anything like it. The art and the space blew me away, and from that moment on I only wanted to make art for that space,” writes the maverick Brit artist. Perhaps the pair reminisced over the good times (and all the art they’ve lovingly exchanged).

The façade of the new Sarabande Foundation space, nestled in an annex of Burberry’s London store, might well make heads spin. The foundation—the non-profit organisation established from the estate of the late fashion designer Lee Alexander McQueen—has given artists and designers a prime West End platform. And they have not disappointed, filling the temporary Mayfair space (The House of Bandits, until 19 December) with desirable objects and installations. Artist and designer Joshua Beaty has packed the front window with colourful detritus (imagine a sea of mind-blowing crochet and marvellous materials). Beaty highlights how we think rubbish is…. rubbish really, saying: “The duration of throw away items is extended in finding a new purpose.” Or to put it more eloquently: “Why is tin foil less valued than a diamond?” Since 2012, Sarabande has supported creatives with studio space, as well as scholarships to attend Central Saint Martins and UCL’s Slade School of Fine Art (Beaty is a Sarabande alumni—top marks). 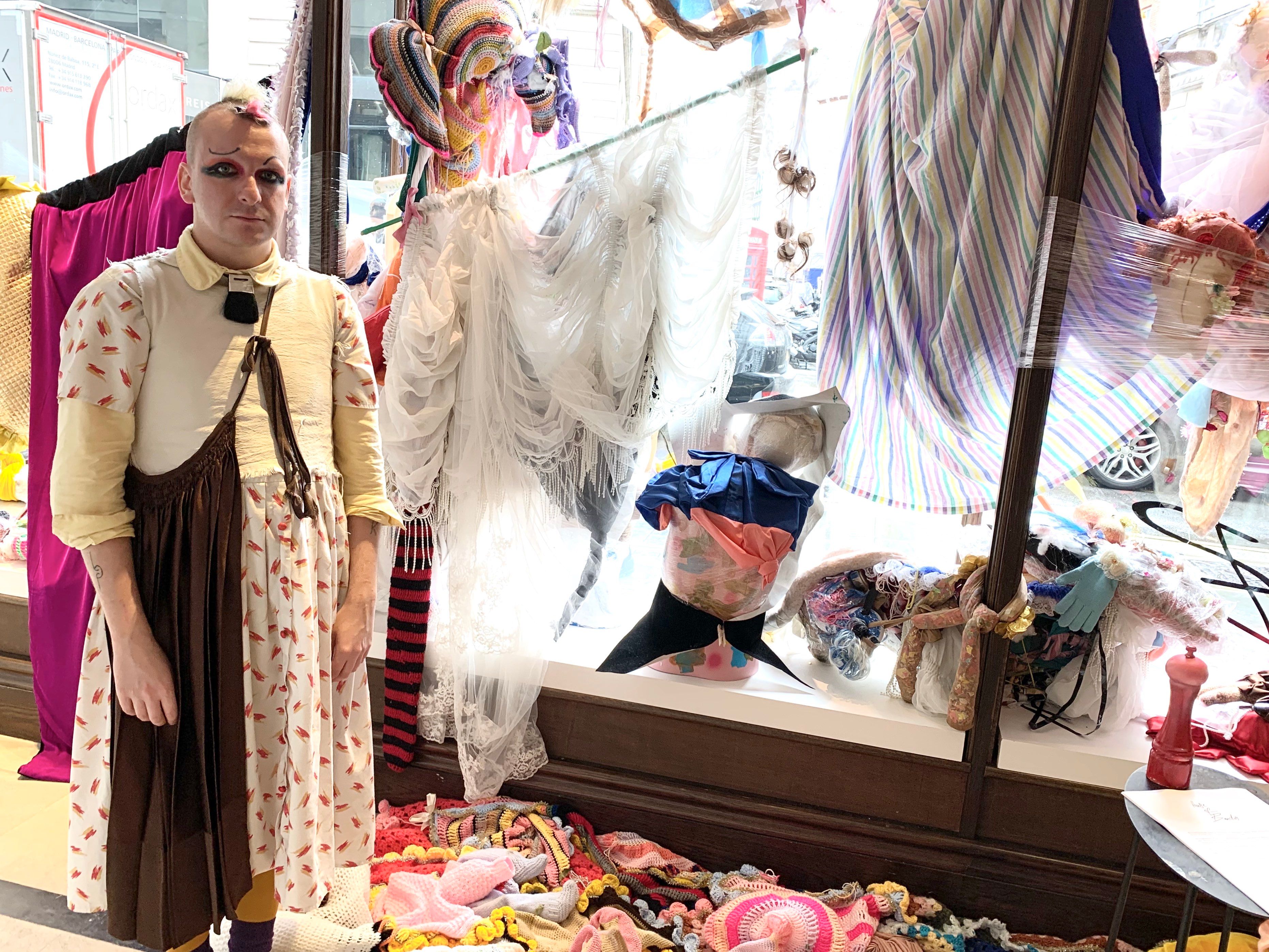 Joshua Beaty at The House of Bandits Gareth Harris

An art event also worth clocking this week was Yinka Shonibare’s commission from the Government Art Collection for a limited-edition piece to be shown at diplomatic buildings worldwide. Shonibare has created a beguiling woodcut print and fabric collage edition, Hibiscus and the Rose, which will grace British embassies and consulates from Moscow to Mexico. “The rose is the national flower of England and has a long tradition within English symbolism. An exploration of Britain's colonial past and its current relationship with its former colonies is symbolised through the Hibiscus and the Rose,” the artist says. The commission is sponsored by philanthropists Sybil Robson Orr and Matthew Orr through their Robson Orr TenTen Award. But you don’t need to be in government to get your hands on Yinka’s creation—a small number of the flowery prints are also available for purchase through a collaboration with the philanthropic arts organisation Outset. Child of Billy Childish keeps it in the family

UK artist Billy Childish is wowing the crowds at the new Cromwell Place complex in South Kensington, creating impressive new works on the spot in front of keen visitors in Lehmann Maupin’s gallery space. But Billy is not alone in his artistic endeavours—his son and fellow artist, Huddie Hamper, is also occasionally in residence, making this the first public outing for the likeable father/junior duo. “We have worked together in my studio,” Billy says, adding finishing touches to a fetching self-portrait. Huddie, a student at UCL Slade School of Fine Art, has not yet signed up with a dealer—perhaps gallerists currently occupying the swanky new venue should pop in and consider taking on the latest scion of the Childish stable? 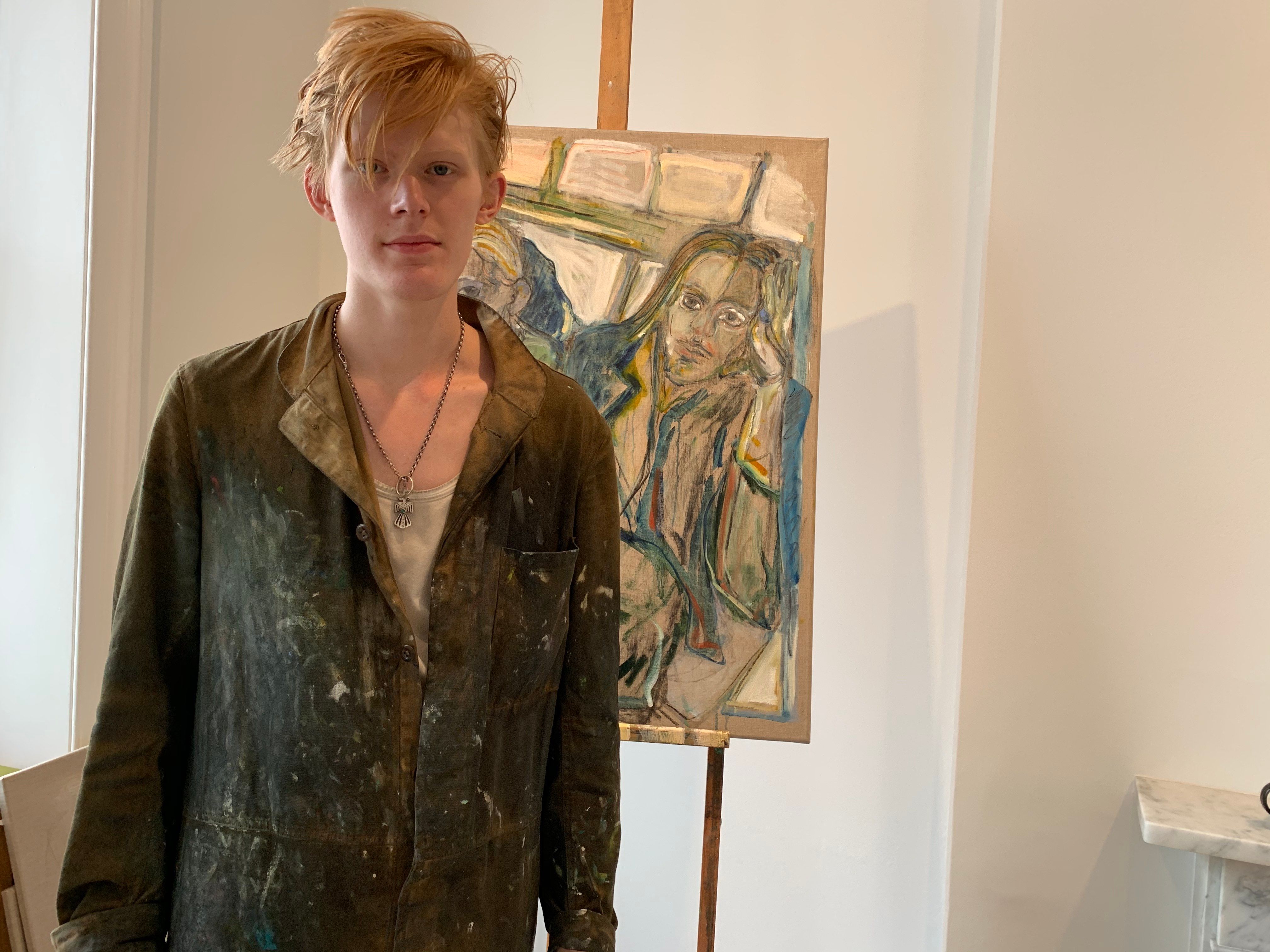 Almighty God has faith in his art

Visitors to the 1:54 African Contemporary Art fair—the only IRL event of its kind in London this week—should pop along to The Gallery of Everything which is showing some stand-out works by an artist (immodestly) called Almighty God. This Ghanaian sign painter, aka Kwame Akoto, has made some startling works, from a smoking dog to a top-notch representation of former US President Barack Obama. Gallery founder James Brett explains “that the preaching is part of his faith, I don’t think he’s got a church as such. But his work is part of his mission on earth.” The 1:54 presentation at Somerset House also neatly links to a show of works at Brett’s nearby gallery on Chiltern Street dedicated to the late street preacher from New Orleans known as Sister Gertrude Morgan. “I’ve always been attracted to this kind of truth seeking. It makes the work itself truthful. It’s the same story with Sister Gertrude Morgan. It is her search for truth that brings such charge to her relatively simple iconic imagery,” Brett opines. 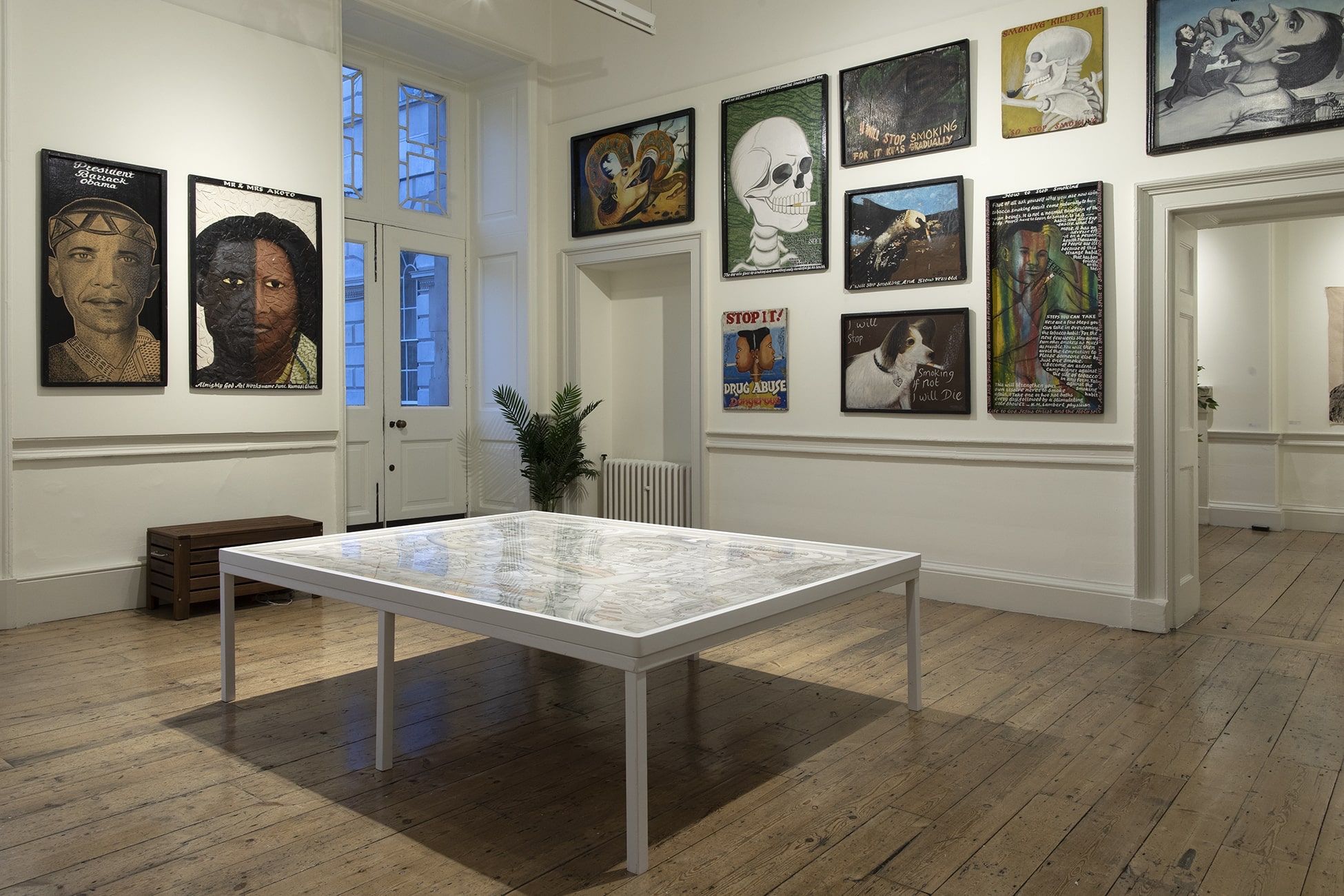