Discovery in a Toulouse attic is no Caravaggio 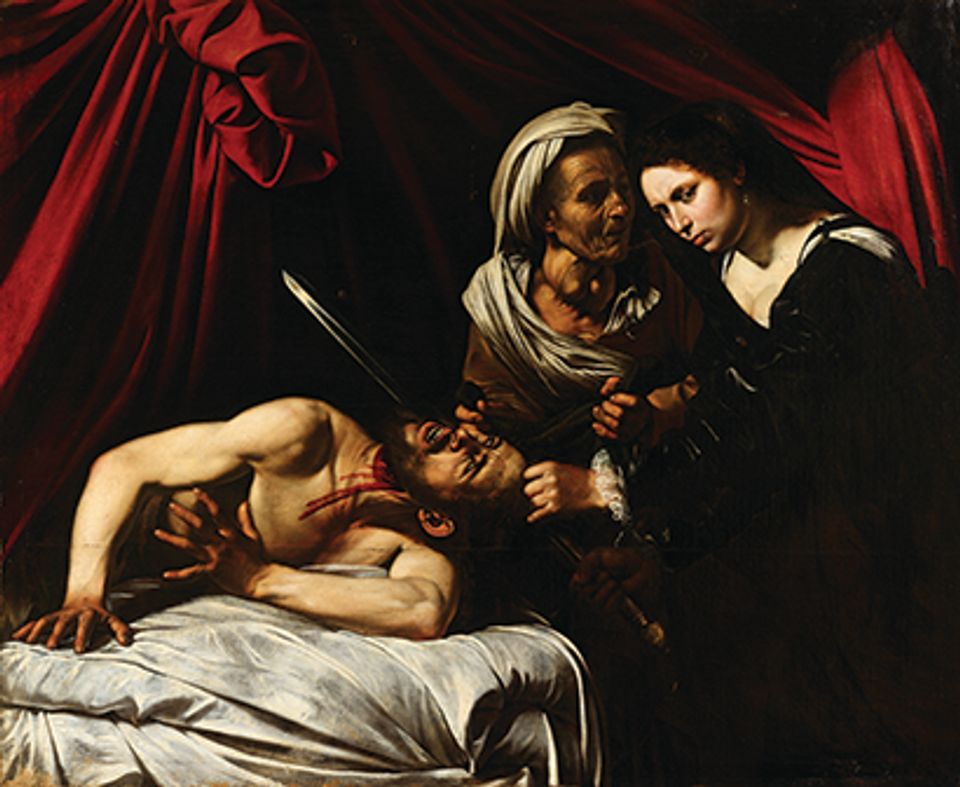 Judith and Holofernes was rediscovered in a French farmhouse Photo: Cabinet Turquin

Caravaggio was a genius. It should not be necessary to say that. Yet the hyperbole that has built up around a painting discovered in a Toulouse attic in 2014 depends on ignoring this one critical fact.

The picture of Judith and Holofernes that goes on sale in France in June only looks like an original, unsullied Caravaggio if you ignore its ripe assortment of failings and oddities. People flocking to see it recently when it was shown by the auction house Marc Labarbe in London seemed glad to give it the benefit of the doubt. After all, it is exciting stuff. Holofernes props his torso on a bent arm, like a lizard, as his half-severed head emits a bestial snarl. Judith pauses and turns her eyes away to brood on her deed, holding her sword in one hand while her other grasps his hair.

This is, we are told, a long-lost painting that Caravaggio created in Naples in 1607 and that has been known up to now only through a copy attributed to Louis Finson. This minor follower of Caravaggio offered to sell a Judith and Holofernes by the master at his Naples studio in 1607. There’s no doubt the Toulouse canvas is a lot more competent than Finson’s dry hack job. Yet when all the pentimenti have been counted, does it actually look much like a Caravaggio?

When he turned up in Rome in 1592, Caravaggio could already paint fruit with eye-fooling exactitude, faces with sensual realism, reflections in water with optical understanding. By the later 1590s, he was deepening his shadows and intensifying his light. Then, after killing a man and fleeing Rome in 1606, his style changed again, becoming smokily poetic. The trouble with the Toulouse Judith is that it does not fit into any of Caravaggio’s periods. It is much more crudely lit than other works he is known to have painted in Naples in 1606-07. This, after all, was when he created The Seven Works of Mercy and the Flagellation—visionary paintings that use silvery light and thick nocturnal tenebrosity to create a new kind of emotional suggestiveness.

Where are the shadows? Judith holds her sword low down but only a mild gloom surrounds it. This is nothing like the inky enfoldings that swallow light in Caravaggio’s canvases. His Portrait of a Knight of Malta (around 1608) shows a man with his hand on his sword. Yet the way it glints out of deep shadow is so much more subtle than the crude material fact of Judith’s sword. Caravaggio knew his blades; they catch the light in menacing glances. By contrast, the sword in this painting is a flat dull band of grey, touched by a dead white light.

This insensitive use of light is not merely the opposite of Caravaggesque but robs the painting of psychological power. For Caravaggio never plays with light and shadow for their own sake. The glow on a face or body emerging from darkness directs us to the painting’s purpose and meaning. In the Toulouse Judith, his powers of drama and storytelling seem to fail. A directionless, loose composition does the rest. Judith looks distracted. She is not putting enough effort into this murder. The way she holds the sword is slack and so is her feeble grasp of Holofernes’s hair.

It is hard even to look at the grotesque face and goitre of the old woman. Why make Judith’s servant such a monster? She is a random, destructive presence in the middle of the painting. The dead-eyed face of Holofernes meanwhile looks more like something from a zombie film than a painting by Caravaggio. As for the face of Judith, she looks Flemish rather than Italian, more Jordaens than Caravaggio. Her butter-fed flesh is much plumper than Caravaggio tended to paint. His women have smooth, egg-like features that come from the Renaissance.

I have no idea when it was painted, by whom, or where. But to pin this sloppy Judith and Holofernes on Caravaggio, for all its eagerness to ape him, is an insult to his finesse.

• Caravaggio by Jonathan Jones is published in 2020