In partnership with LUMA Arles

LUMA Arles is a 27-acre creative campus in Arles, which brings together artists and innovators of the future. This summer, the spectacular LUMA Tower designed by Frank Gehry opens its doors to the public with specially commissioned works by leading artists from around the world.

From Roman architecture to medieval streets that inspired Van Gogh, the historic city in the south of France is becoming a go-to destination

Roman and medieval architecture, fine museums and streets filled with colourful buildings admired and captured by Vincent Van Gogh make this historic city in the south of France a go-to destination for art and culture lovers. Here we highlight what to see next time you find yourself in and around Arles. 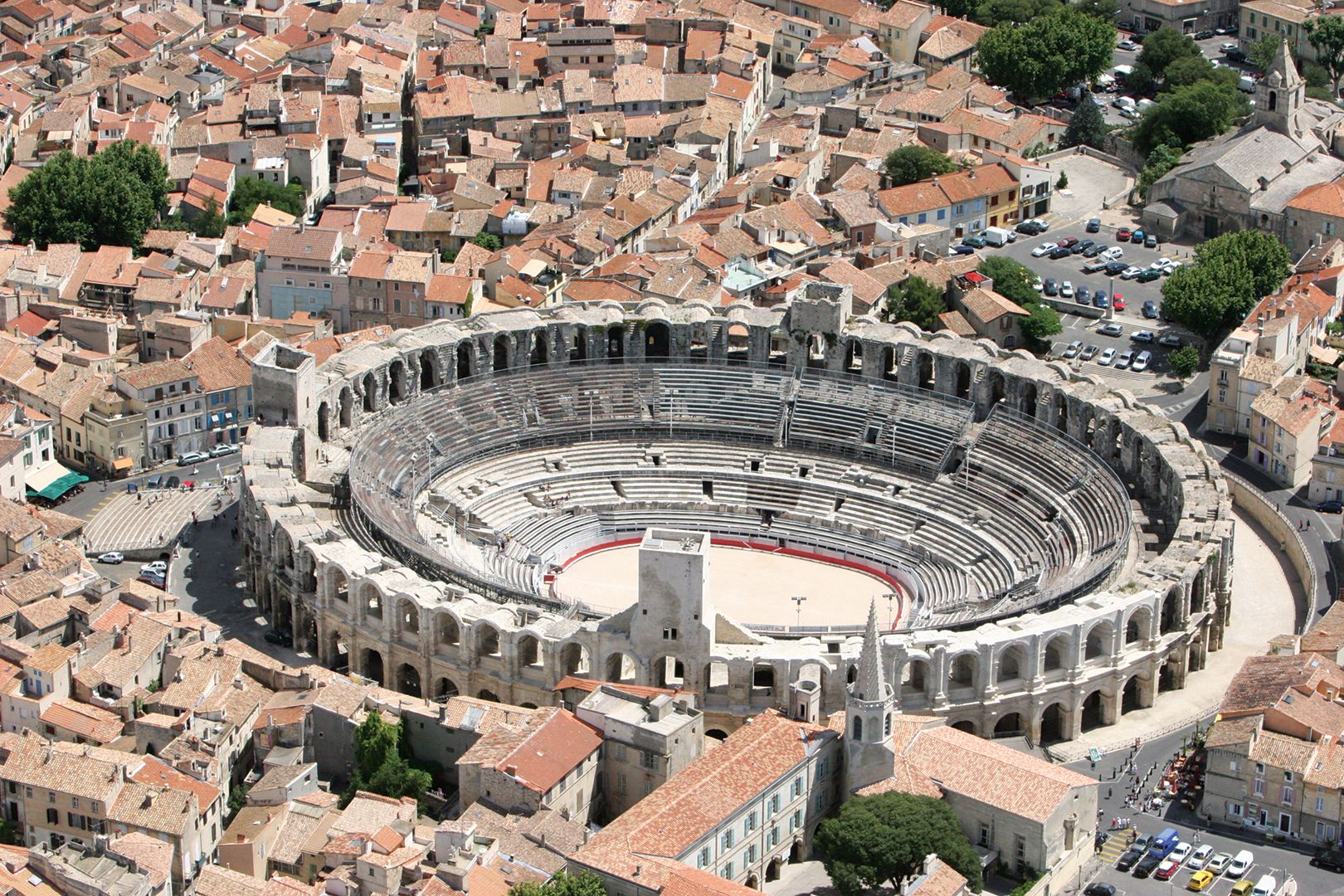 The Roman history of Arles harks back to 46BC, when Julius Caesar established a colony there. The town has been a Unesco World Heritage Site since 1981 and boasts many ancient ruins, including a Roman theatre, the baths of Constantine and a cryptoporticus (subterranean vaulted galleries). Just north of the town are the Roman Barbegal aqueduct and mills. But Arles’s most prominent example of Roman architecture is its impressive amphitheatre, which in its heyday could accommodate up to 21,000 spectators to its gladiatorial combats. In the 19th century, the amphitheatre once again began to stage competitive events—this time, bullfighting. Indeed, the site is often referred to today as “les arènes” (the arena) and bullfighting still takes place there.

In recent decades, the amphitheatre has hosted projections during the Rencontres d’Arles photography festival as well as contemporary art exhibitions such as the LUMA Foundation’s show To the Moon via the Beach (2012), which featured site-specific projects by artists including Pierre Huyghe, Lili Reynaud-Dewar, Anri Sala and Elvire Bonduelle that unfolded in the sand-filled arena, dotted with Daniel Buren’s flags, and its passages.

Meanwhile, the Musée Départemental Arles Antique offers visitors insight into the commercial importance of Arles during the Roman Empire when goods from the Mediterranean and beyond travelled up the river Rhône. Some of the museum’s exhibits were dredged up from the Rhône, such as a marble bust presumed to be of Caesar that was salvaged in 2007. An enlarged, red version of the bust, realised with a 3D scan, is displayed in the Hortus garden. A.S. 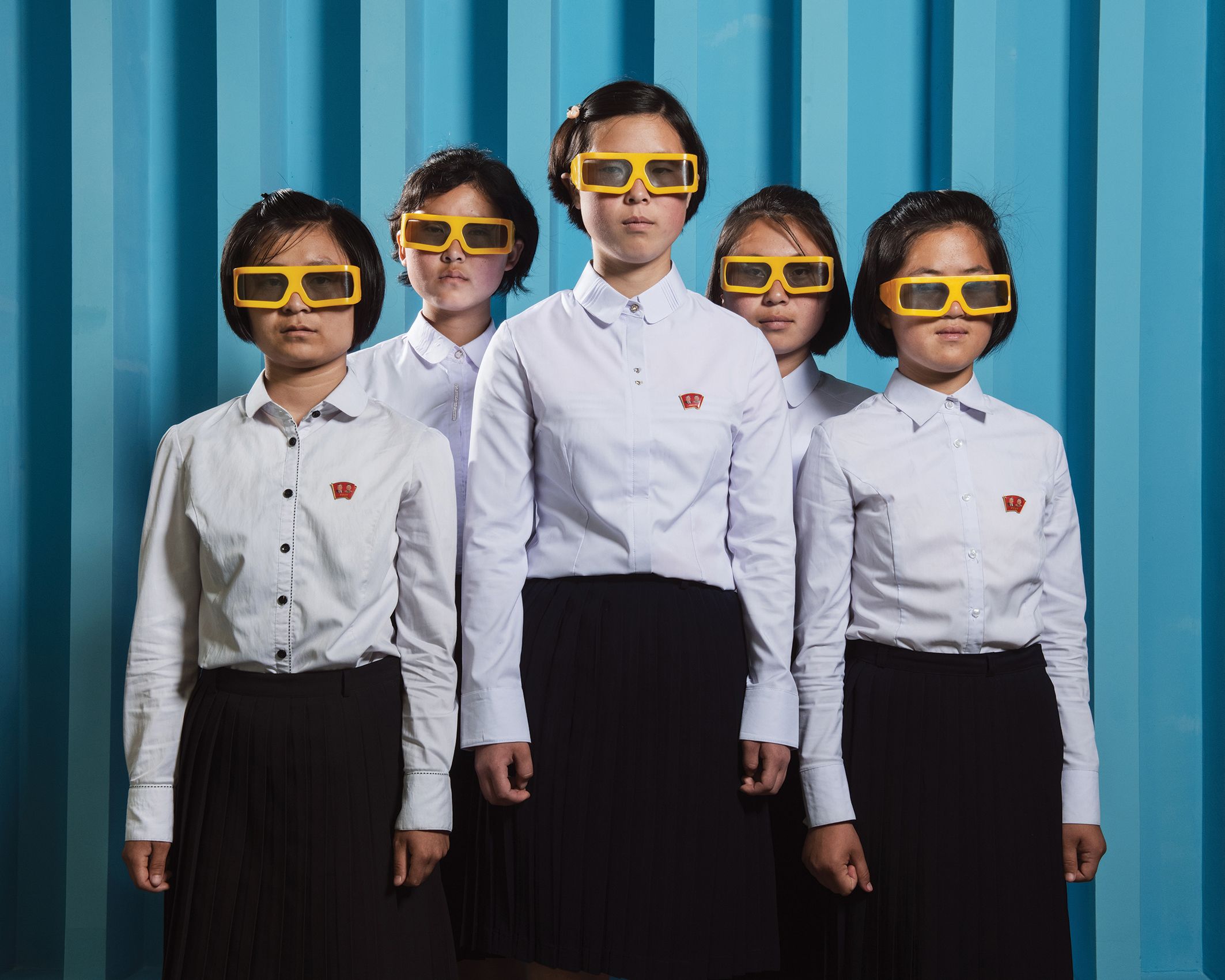 A photograph by Stephan Gladieu from his series of portraits of North Korean citizens © Stephan Gladieu. Courtesy of School Gallery / Olivier Castaing

Focus in on photography at Les Rencontres d’Arles

Most summers, the sleepy streets of Arles transform themselves into the improvisational exhibition spaces of the most storied photography festival in the world. Since its first edition, in the summer of 1970, Les Rencontres d’Arles has been loved for its ability to weave photography into the fabric of the city. Visitors can get lost in its maze of streets, and come across a fantastic show in a church, a garage or a living room—and have a glass of rosé thrust into your hand.

Rencontres d’Arles did not take place in 2020; it was the first time an edition was missed since its inception. Now, in 2021, and with Covid-19 still disrupting travel and gatherings, the festival is pressing ahead with this edition titled Summer of Fireflies, which is due to open in July.

The festival is being headlined by new work from the French photographer Stephan Gladieu, who travelled to North Korea to take posed portraits of the country’s citizens. Also on show is a group exhibitions exploring masculinity and the new Black vanguard, as well as solo shows of new work by the Emirati photographer Farah Al Qasimi, the Singaporean photographer Sim Chi Yin, the South African photographers Lebogang Tlhako and Pieter Hugo, and the 97-year-old French humanist photographer Sabine Weiss.

The five former industrial buildings surrounding LUMA Arles, revitalised in monumental fashion by the US architect Annabelle Selldorf, are also hosting shows and from these spaces the festival will pour into the streets of Arles, once again turning this bucolic Roman town into a labyrinthine gallery of photographic discovery. T.S. 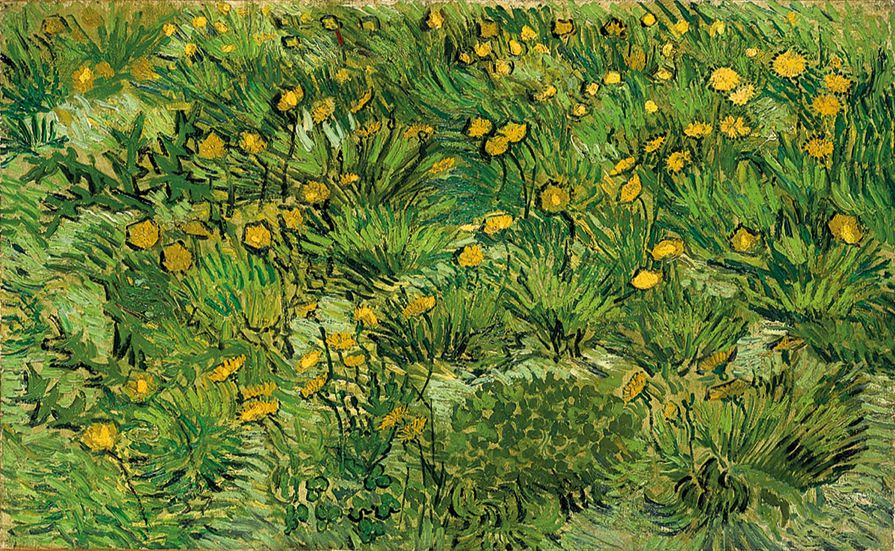 Although Vincent van Gogh created his greatest paintings in Arles, not a single one has remained in the city. Now his pictures are finally returning to Provence, thanks to an initiative by the Fondation Vincent van Gogh Arles.

Every summer the art centre borrows a few pictures by Van Gogh, which are hung alongside works by contemporary artists. Although the foundation honours the Dutch master, the venue is an exhibition centre and not a museum. It is very much focused on the art of today, under its artistic director Bice Curiger and president Maja Hoffmann.

This summer, its major exhibition is devoted to the US painter Laura Owens. It includes new works, vast in scale, that are inspired by seven Van Gogh paintings being lent to the centre. These include Dandelions (1889) and Hospital at Saint-Rémy (1889), with the latter being from the Hammer Museum in Los Angeles, where Owens lives.

For Van Gogh aficionados, a visit to Arles with its largely pedestrianised historic centre is a treat. Among the places painted by the artist that can be seen are the Roman arena; the café in Place du Forum; the former hospital where Van Gogh was treated after mutilating his ear; Place Lamartine (site of the Yellow House, bombed in 1944); the avenue of ancient tombs (Les Alyscamps); and views of the Rhône. M.B.

• Martin Bailey’s book on Arles, Studio of the South: Van Gogh in Provence, is published by Frances Lincoln in paperback on 6 July Art destinations to explore around Arles

In recent years Montpellier, about an hour’s drive west of Arles, has become an international art destination with the launch of Mo.Co. Montpellier Contemporain, a citywide cultural institution encompassing two exhibition venues and an art school. The main exhibition space is housed in the 18th-century Hôtel des Collections, which hosts displays of private and public collections. Notable permanent art installations include Loris Gréaud’s Idle Mode, a unique neon suspension light across the ceiling of the Hôtel des Collections bar, which, say gallery officials, “takes its cue from the crumpled plan of the building”. The Collection Lambert in Avignon, 40km north of Arles, is an essential stop on any art itinerary around Provence. The museum complex, home to the former dealer Yvon Lambert’s 556-strong blue-chip contemporary art collection, opened in 2000 and expanded to the neighbouring Hôtel de Montfaucon 15 years later. The collection includes more than 30 works by Cy Twombly, and 35 sculptures, works on paper and wall drawings by Sol LeWitt. “Since the 1990s, videos, installations and paintings have made up most of [Lambert’s] purchases. In this way, the collection has continued to grow and maintain its focus on young, forward-looking artists,” say collection officials. 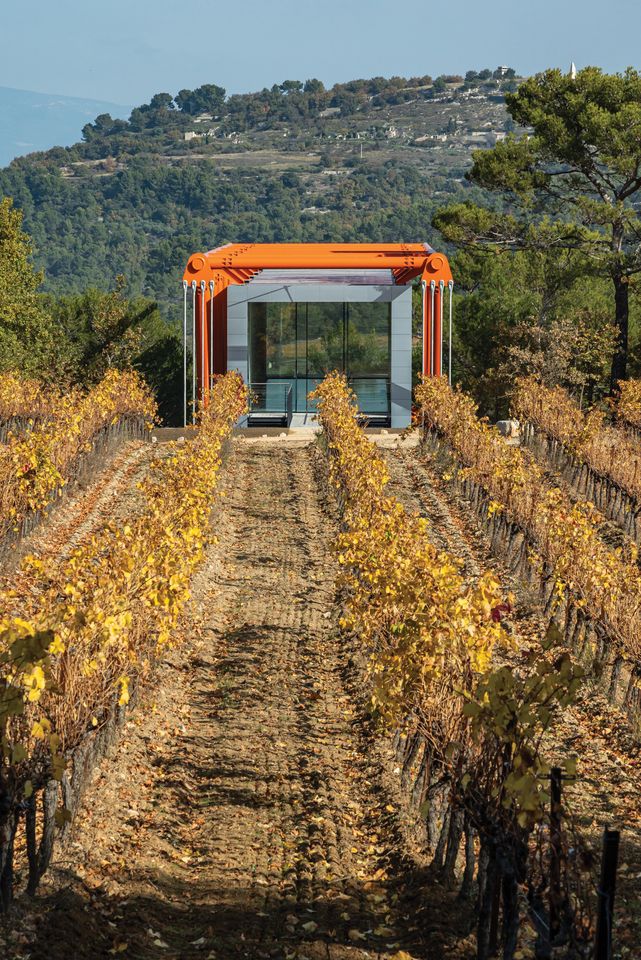 Around 15km north of Aix-en-Provence, viniculture and art come together at Château La Coste, where visitors are greeted by Louise Bourgeois’s Crouching Spider (2003) hovering over a shallow pool of water designed by the Japanese architect Tadao Ando. The hotelier Paddy McKillen’s vision for the vast estate includes a series of buildings designed by stellar architects, including a wine storehouse by Jean Nouvel, a pavilion by Frank Gehry and a gallery designed by Renzo Piano. The latest on-site addition is the Richard Rogers Drawing Gallery, a 120 sq. m space that cantilevers off a hillside among trees above a historic Roman track. 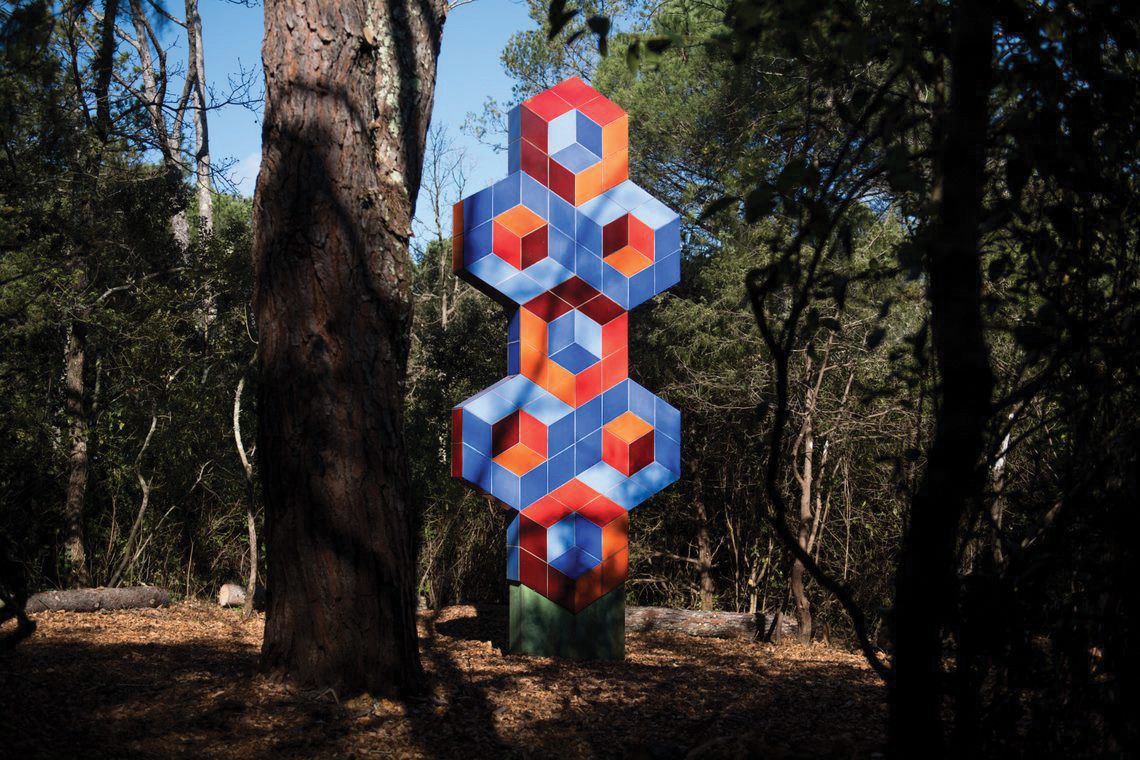 Further east, another vast sculpture park is nestled in the 1,000-hectare vineyard estate at the Commanderie de Peyrassol, Flassans-sur-Issole, cultivated by Philippe Austruy, who made his fortune in private healthcare. The sprawling site, around an hour’s drive from Aix-en-Provence, is dotted with more than 100 works by high-profile artists such as Ugo Rondinone, Lee Ufan, Victor Vasarely, Gavin Turk and Joana Vasconcelos. New installations include Arborexence (2021) by Loris Cecchini and Sulky (2020) by Bertrand Lavier. G.H.