Following the financial fallout from Covid-19, A Blade of Grass—which has supported activist artists such as Dread Scott and Simone Leigh—will also end its influential fellowship programme 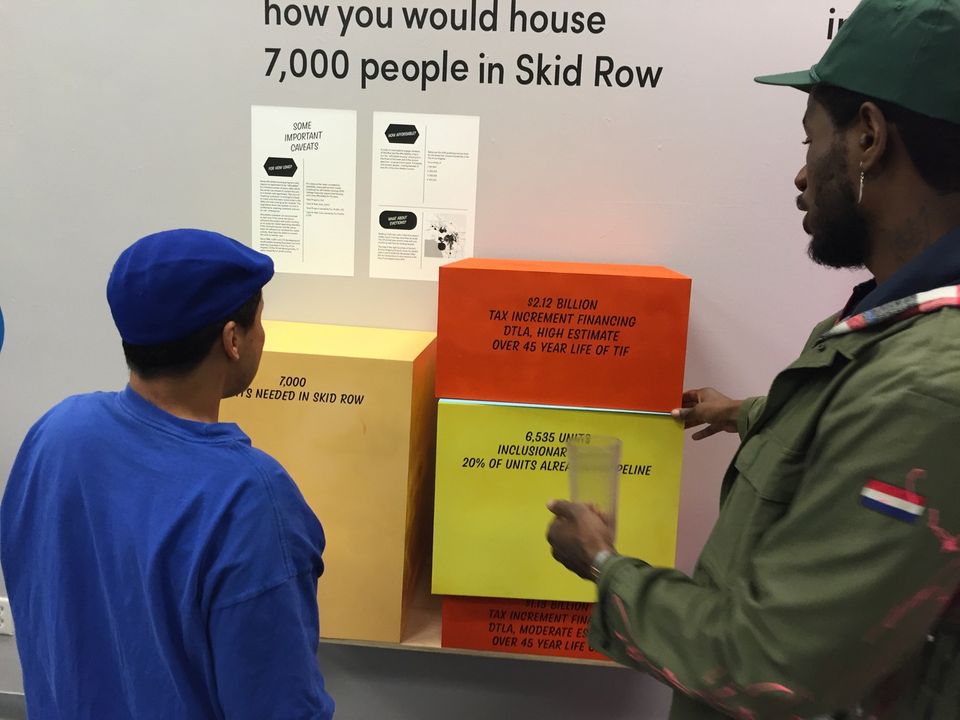 A project from the Los Angeles Poverty Department funded by A Blade of Grass, "How to House 7,000 People in Skid Row," opened on 7 March at Skid Row History Museum and Archive in Los Angeles before being shuttered by Covid-19. Courtesy of A Blade of Grass

Amid ongoing economic turmoil in the arts and culture sector, A Blade of Grass, the New York-based non-profit that supports socially engaged art through annual fellowships and commissions, announced today that it will begin a significant restructuring process following months of financial losses wrought by Covid-19.

As part of its multi-year restructuring plan, the organisation will lay off all of its current five full-time staff members, effective 15 October. Deborah Fisher, the executive director, will remain in her role but with cuts to her salary and benefits.

“In a moment when socially engaged artists have a particularly critical role to play, we are also being faced with the reality that arts funding, in its current form, is precarious precisely because the arts are perceived as serving too few,” Fisher says. “While we could not have predicted these circumstances, we have to deal with the moment as it exists and make the difficult but necessary decisions now to establish a more sustainable model that will allow the organisation to continue to fulfil its mission and the commitment it made to supporting socially engaged art and the artists who create it.”

During the 2021 fiscal year, the non-profit will launch a commissioning model through which it will support the creation of a selection of artworks and related public programs. In addition, the non-profit will organise “listening sessions” with artists to discuss their needs and formulate new modes of meeting them.

The programme, launched in 2014, had awarded individual grants of $20,000 to eight artists during each cycle to develop artworks that address social, political and economic issues across different communities. The organisation has provided the 2020 fellows with their full cash awards and will carry through project-related commitments before ending the programme.

In the non-profit’s last fiscal year, 70% of the fellowship was supported by individual donors. But because the pandemic hampered artist-led events and typical fundraising efforts, the organisation reached the end of this fiscal year with less than a year of operating expenses left in reserve and “too few viable paths to the funding we need”, Fisher says, requiring a budget cut of $450,000 to $1m.

The organisation received a Paycheck Protection Program (PPP) loan for under $150,000 through the government-funded CARES Act economic stimulus package, initiated in the spring, which helped it cover staffing costs from April to July, according to Fisher.

Staff were notified two months in advance of the impending layoffs and all will be given an additional pay period’s worth of severance and maintain health benefits through 1 November. Fisher, who has been with the organisation since its inception in 2011, will be the only full-time staff member left on the payroll and will take a 10% pay cut and relinquish all of her benefits. One full-time associate-level position will be created in the coming months—a role that was offered to someone on the current staff.

“This is a challenging moment, and it is demanding that we ask big picture questions about why we all need art, where it needs to be right now, and how we might best support and amplify the important work artists are doing to share the creative process within communities,” Fisher says. “Our success depends entirely on being open to an unknown future, and on remaining in service to the important work artists are doing.”

The decision, made by Fisher with support from the board of trustees, comes at a moment when many smaller non-profits and art spaces are in dire need of increased financial support across the cultural landscape. A Brookings Institution report authored by economists Richard Florida and Michael Seman published last month estimates a loss of 2.7 million jobs and $150m in revenue within the creative industries nationwide while pointing to the need for more federally funded stimulus programmes—and quickly.

In response to the economic crisis precipitated by the pandemic, Americans for the Arts (AFTA), a non-profit arts advocacy group, released a proposal earlier this month for a national recovery strategy that the next presidential administration could use to funnel money back into the $887bn US arts sector. Additionally, on 2 September, the grassroots advocacy group Be An Arts Hero announced the Defend Arts Workers Now (DAWN) Act—a bill that would authorise $43.85bn in funding to make grants to the operators, employees and artists of live venues, recording venues, cultural spaces and related businesses that have shuttered due to Covid-19.