Works are on show as part of Dark Mofo, a festival organised by the Museum of Old and New Art just north of Hobart

22nd June 2018 10:38 BST
A clip from the video Tether by the artist Maria about the inmate Karen's horse Salvatore The artist

“The process of the artists and inmates making video works together, in a space where the inmates can’t be identified, the prison can’t be filmed and so much technology is prohibited, became not limiting but quite fascinating from a conceptual and material perspective,” says Grace Herbert of Hobart-based Constance ARI (artist-run initiative) who co-facilitated the project with her colleague Lucy Parakhina.

Parakhina says the project, titled Pink Palace after the nickname given to the formerly gaudily painted prison building, was “to commission works that represented the lived experience of people in incarceration, and opened up space for the inmates to have an equal creative role in their production”.

The videos are on view in a former Goodyear tyre building in Hobart from 9-24 June as part of Dark Mofo, a festival organised by David Walsh’s unorthodox Museum of Old and New Art just north of Hobart. 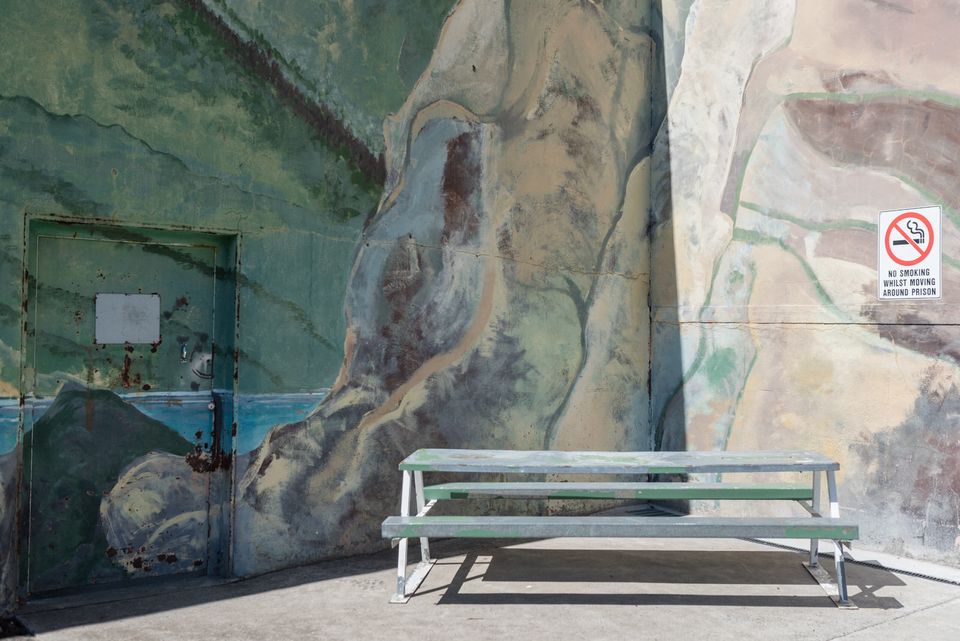 The artist/inmate partnerships are Samuel and Kristy, Dexter and Patrick, Tess and Michael and Maria and Karen.

“The inmates aren’t allowed to be identified for ethical reasons, so the artists agreed to go with their first names too,” Herbert says.

The passing of time in incarceration was the loose theme of all the Pink Palace videos. Artist Maria’s work is a stop-motion video depicting a painted horse galloping. The inspiration for this was Salvadore, the imaginary horse which has comforted inmate Karen and slept at the foot of her bed. “(Salvadore) had been with her throughout her trial and sentencing and now lived with her in the prison,” Maria says.

“The next time I saw her, he had run away and she told me she’d painted thousands of grains of rice green to look like grass, and left them in a bowl by her bed in an effort to coax him back. She also shared how at times she’ll call the prison guard on night duty, asking if they’ll go and look for (Salvadore) in the prison grounds. She said some guards fulfil the request, saying they’re happy to do it if it helps her sleep.” When Maria showed Karen the finished video, Karen said: “I’d hug you but I’m not allowed to.”

The other artists said visiting Risdon, despite its difficulties, had been enjoyable. “Kristy’s generosity and dark humour have got her through, and they did me too,” artist Samuel said.

A short stroll up the street from the Goodyear building is perhaps the most bizarre of the Dark Mofo projects. Acclaimed and respected Sydney performance artist Mike Parr was interred below the bitumen surface of Hobart’s busy Macquarie Street for 72 hours. Parr had water, but no food, and lived in a steel container measuring 4.5m x 1.7m x 2.2m.

Titled Underneath the Bitumen the Artist, the work was designed to "memorialise the victims of 20th-century totalitarian violence", including "the genocidal violence of 19th-century British colonialism in Australia", according to Dark Mofo. Parr resurfaced on Monday.

In her own words: the artist Maria, who worked with Risdon inmate Karen

The experience working with Karen has been intense and disturbing at times, but also very moving for me. She’s very busy in the prison with daily appointments, courses and jobs, so it was generous of her to be committed to this project. We met weekly and she was extremely open with me. Our relationship has been a curious unfolding because I’m not really allowed to share personal information with her… but through the act of making a piece in response to her experience and sharing it with her, I feel we have a unique closeness I can’t really compare to anything.

Her presence is at once commanding and vulnerable. She’s intelligent and complex, and speaks candidly about her history, often with casual dark humour relating to the more harrowing incidents. Her struggle with mental health is something she acknowledged throughout. She is very informed on the subject and well able to discern hallucination from reality. Part of her busy schedule includes receiving support from mental health professionals within the prison.

I knew from the beginning this collaborative piece wasn’t going to be driven by a political critique of prison, but something more intimate from this person, exploring their narratives and the potential darkness of mental ill health, in the context of incarceration.

After hearing account after account from Karen’s personal history I was beginning to feel a bit lost in a sea of shocking, disturbing information. I couldn’t sleep very well and ideas weren’t really developing in my conscious mind. (Constance ARI was very supportive and offered sessions with a specialist psychologist to all of us.) I knew Karen wanted to make some kind of linear story about a person who has dark times but gets through it in the end. She was also quite adamant about not being seen as a victim.

I was familiar with her dissociative hallucinations being part of her stories, and one day after an hour-long interview as I was about to leave, she spoke about Salvadore. He was a white horse who had been with her throughout her court appearances and now lived with her in the prison. The next time I saw her he had run away, and she told me she’d painted thousands of grains of rice green to look like grass, and left them in a bowl by her bed in an effort to coax him back. The following week she had stuck hand-written signs up in her room pleading with him to return.

It was moving to see her innocent vulnerability through this coping mechanism, paradoxical to her generally tough exterior, and her willingness to disclose it was heartening. She also shared how at times she’ll call the prison guard on night duty asking if they’ll go and look for him in the prison grounds. She said some guards fulfilled the request, saying they would be happy to do it if it helped her sleep.

At the time I was researching mental health, mythology and Jung’s theories of the collective unconscious and the shadow self. I found myself having a recurring dream of four white horse legs trotting and galloping against a dark background. I felt a push to go with this imagery and explore it further. I discovered some interesting links with human movement, and imagery that echoed Karen’s mental state to me.

I decided to make a kind of cyclic representation of her mental struggle, with Salvadore representing not a happy ending as such, but something beautiful and protective that appears in the depth of her struggle. The weekly meetings continued and Karen was intrigued by the proposed idea, though neither of us could really picture the result.

I worked in a cold, blacked-out studio, making very loose and simple drawings using oil paint, and recording them in stop-motion animation format. It’s a slow and laborious process that becomes automatic for me over time. I worked with a brilliant musician friend in Melbourne (Leni Philippe-Janon) for the sound.

When I could finally show Karen the work I was quite nervous, suddenly feeling the risk of relying on this semi-conscious practice and symbolism to communicate something so mysterious and personal to her… and also aware I didn’t have much time to change it if she didn’t feel it was successful.

Her response was that she felt very connected to the work, picking up on various images relevant to her, even some that had been unintentional for me. She requested I tweak a few things to do with timing and intensity, but the imagery really resonated for her and she watched it several times, just nodding. Before leaving she said: “I’d hug you, but I’m not allowed hug you” so we hugged ourselves before she went off to her next appointment.