The Empire strikes back? Kara Walker's fountain makes a splash at Tate 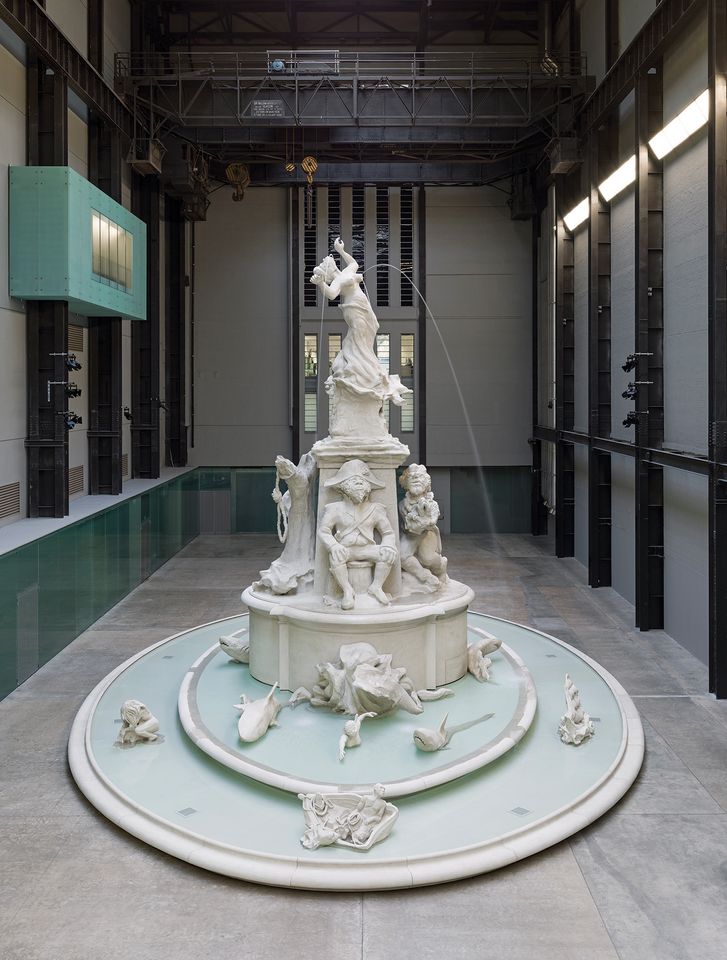 The US artist Kara Walker takes on the delicate subject of the British Empire’s legacy in her monumental 13m high fountain, unveiled this week in Tate Modern’s Turbine Hall. Fons Americanus (until 5 April), which rises from two oval basins filled with water, is modelled on the grandiose Victoria Memorial unveiled in front of Buckingham Palace in 1911.

The piece—the latest Hyundai Commission—explores the interconnected histories of Africa, America and Europe over the centuries, referencing the Transatlantic slave trade and, at the same time, taking a swipe at the British Empire. The work, made of recyclable cork and softwood, offers a “powerful critique, inverting the usual function of memorials and questioning the narratives of power they present”, a Tate statement says.

“We hope that the public will engage with the work and question the monuments we inherited in our cities to look at where these monuments come from and the official accounts of our histories,” says the Tate’s senior curator Clara Kim.

Walker also links the work to the debate raging over the legitimacy of Confederate statues in the US. “The Confederate debate has been interesting in that it makes me feel that the US is a very young country… there has only recently been a concerted national conversation about what those monuments are, what they mean,” Walker said at a press briefing.

“What the Confederate debate and removal of statues from places like New Orleans has done is not just reignite the debate but has unearthed the racism and cruelties that have lived quietly under the surface for some time,” she said.

The work draws upon historic and contemporary references, including John Singleton Copley’s 1778 painting Watson and the Shark, Winslow Homer’s The Gulf Stream (1899) and Damien Hirst’s formaldehyde shark from The Physical Impossibility of Death in the Mind of Someone Living (1991).

Humour also permeates the piece. A figure at the back is a light-hearted take on Queen Victoria called Queen Vicky. “She is full of life,” says Priyesh Mistry, the Tate’s assistant curator of international art. “But the allegorical figure of melancholy is half hiding under her skirt, which may be a part of Queen Vicky’s persona.”

Venus stands atop the fountain, recast as a priestess from Afro-Brazilian and Caribbean religions, spurting water from her bosoms “in an act of blessing the world, an act of pure joy and liberation”, he adds.

A separate sculpture by Walker, located towards the Turbine Hall entrance, depicts a scalloped shell, which touches on artistic depictions of the birth of Venus. “In Venus’s place, you see a crying boy in a well, which references Bunce Island in Sierra Leone—a colonial commercial fort where slaves were traded and boarded ships before making the trip across the Atlantic,” Mistry says.

People are already speculating about where the fountain might be sited next. “I would hope some aspect of it would have another life. It has all the possibilities for living beyond its present [form] or it could be the final Turbine hall installation, and could be permanently installed,” Walker joked.